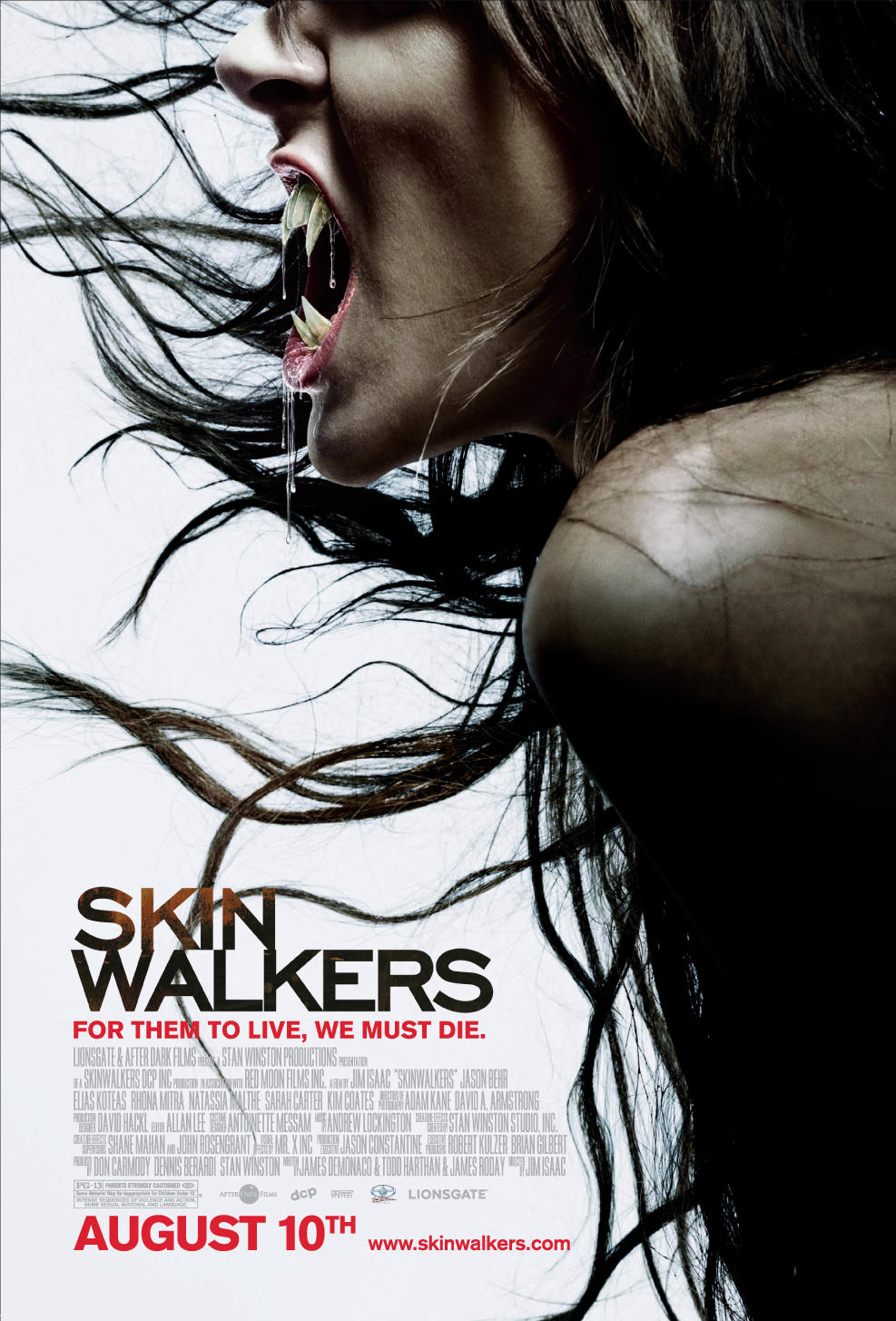 "Skinwalkers" is a horror- about werewolves, and was released in the on , . Directed by , it stars , , , and Tom Jackson. The film was originally announced for theatrical release on , , but was later pushed to , , and , and finally .

"Skinwalkers" marks 's first collaboration with Constantin Films, which produced such other science fiction/horror films as "Resident Evil", "", and "". The visual effects are by effects house Mr. X, and the creature effects by Stan Winston Studio.

Two packs of werewolves, divided by principles, are signaled by the moon of the coming of an ancient prophecy. A young boy named Timothy (Matthew Knight) approaches his 13th birthday, unaware this marks the time of his transformation. Timothy has been raised by his grandmother Nana (Barbara Gordon), his mother Rachel (), his uncle Jonas (), his cousin Katherine () and Katherine's boyfriend, Adam (). His father is said to be dead.

Rachel and Timothy have been unaware that the rest of the family are "good" werewolves who have guarded Timothy and his secret since birth. They know that Timothy is a "half-blood" who is prophesied to end the curse. But they also know that Timothy's power will put him in danger, for there are other werewolves that revel and embrace their blood-lust and are bent on finding and killing the boy. Four of these werewolves are a pack &mdash; leader Varek (), and cohorts Zo (), Sonya (), and Grenier (), who uses a hawk as an airborne spy &mdash; who track down Timothy in the small town of Huguenot, precipitating the movie's extended chase.

Varek discovers the location of Timothy via a video tape which is shown to various "good" werewolves that he is alive and well. Reaching Huguenot, Varek saw Nana and Timothy and proceeds with a gunfight between his pack against the "good" werewolves and various townspeople. Adam's father is killed in the gunfight and Nana sacrifices herself to let Timothy and the others escape. Jonas explain the whole situation to both Rachel and Timothy and they are convinced after Jonas and others turn into werewolves at night.

The next day, Timothy goes down with a seizure and is sent to a nearby hospital. Varek's gang infiltrate the hospital and attack Timothy. Grenier is killed by Adam while Katherine is being held hostage by Varek. It is subsequently revealed that Varek was Caleb, Rachel's husband and Timothy's father, and his transformation was due to him feeding on humans.

After escaping to a safe place, Adam goes off on his own and finds Katherine and brings her back. At sundown, Katherine was discovered to have been forced to feed on humans and kills Adam with his own gun. Just as Katherine is about to attack Timothy, Jonas manages to kill her with a gunshot in the back.

They manage to find their next safe place, with Rachel and Timothy hiding in a steel cage while Jonas sets out to ambush Varek, Zo & Sonya. Zo is killed after being trapped and being dropped down from a height. Sonya tries to attack Rachel and Timothy but is shot by Timothy. Rachel then proceeds to finish Sonya off. Varek then tries to kill Timothy but is stopped by Jonas. They get into a struggle and in a bid to win Varek, Jonas feeds on Varek's arm and knocks Varek unconscious. Taken over by the blood frenzy, Jonas attacks Timothy and is shot to death by Rachel. Varek wakes up and bites Timothy but the clock chimes midnight. He is then shot by Rachel and knocked down to the ground. He then transforms back into a human and to his former self, Caleb.

It is later revealed that Timothy is the cure via his blood and that they travel around, giving the cure to those who want it. They also fill bullets with Timothy's blood. The film leaves off with Timothy saying "For some I am salvation, for the others their destruction".

"Skinwalkers" had no advance screenings for critics, though Lionsgate did provide DVD screeners to those who asked. of TVGuide.com noted that "the emphasis is more on conventional action than on man-to-wolf metamorphosis effects and the subsequent beastly mayhem," and said the movie was "briskly paced and features a couple of clever twists on genre conventions before getting bogged down". [ [http://www.tvguide.com/movies/skinwalkers/review/286675 TVGuide.com] (, ): "Skinwalkers", by Maitland McDonagh (review)] of "" said that, "Before flagging toward the end to become a second-rate "", this Canadian-made action drama sparks an old-fashioned charge — it's welcome-to-the-grindhouse all over again with such delicious conceits as a town of werewolf-citizens and a pistol-packing grandma going it gangsta-style". [ [http://www.filmjournal.com/filmjournal/search/article_display.jsp?vnu_content_id=1003623915 "Film Journal International"] (, ): "Skinwalkers", by Frank Lovece (review)] Despite the praise given to the creature effects by Stan Winston, the film received mostly negative reviews.

Ultimately, it was not well received. The film currently maintains a very low rating of 15% at Rotten Tomatoes, with the consensus quote being "Atrociously acted with unoriginal and ineptly-staged action sequences."

The film was not widely released, appearing at its peak on 745 screens during the course of its 2 1/2 week run. The film grossed $553,520 on its opening weekend in the US and a total of slightly more than $1 million domestically. The film grossed $2.5 million worldwide.

The DVD was released on November 27, 2007. It includes a director's commentary, digital effects comparisons, a previsualization featurette, deleted scenes, the original theatrical trailer, a making of featurette, and additional Lionsgate film trailers to The Monster Squad, Fido, Fangs, and The Descent. There is as of right now no unrated or director's cut of the film. While the box says 110 minutes, the film is only 91 minutes.

Varek () &mdash; Formerly Caleb, Jonas's brother and Rachel's husband. Now the leader of the evil werewolves. He turns out to be the father of Timothy. He is cured at the end of the film and reverts to his old normal self.

Jonas () &mdash; The Alpha of the pack sworn to protect Timothy, and father of Katherine. Like the others, he keeps himself restrained on the full moon and wants their curse to finally end. He is shot and killed by Rachel after trying to attack Timothy towards the end of the film.

Rachel Talbot () &mdash; An assumed widow hard-pressed to cope with her frail son Timothy's frequent illnesses. She doesn't know her family and community is made up of werewolves.

Sonja () &mdash; The Alpha female in Varek's pack, and his mate. She was once human, with a seemingly miserable life until changed by Varek. She is very neurotic, completely loyal to Varek, and obsessed with him. She is shot and killed by Rachel.

Zo () &mdash; The second in command in Varek's pack. He is attacked by Jonas during the climax and falls to his death.

Timothy Talbot () &mdash; A half-blood, the offspring of Varek and Rachel. He holds the power to end the 'curse' of his family and the entire werewolf race along with him.

Katherine () &mdash; Jonas's daughter and, like the rest of the family and friends, a werewolf as well. She has a boyfriend named Adam. Towards the end of the film, she turns against and kills Adam and almost attacks Timothy but is shot in the back and killed by Jonas.

Grenier () &mdash; One of Varek's henchmen. He is mute and has a heavily scarred face. He is shot and killed by Adam.

Adam () - Katherine's boyfriend, who is also a lycanthrope. He is shot and killed by Katherine, his girlfriend.

Nana (Barbara Gordon) - Timothy's grandmother. She is killed during the firefight between the "bad" and the "good" werewolves.