The Kaweah River in the U.S. state of California flows 32 miles (51 km) westward from the foothills of the Sierra Nevada into the Central Valley. It rises in forks in the southern Sierra Nevada inside Sequoia National Park, the longest of which is the Middle Fork, about 18 miles (29 km) long. Once it exits the 8,000-foot (2,400 m)-deep canyons that make up its headwaters, the river flows into a reservoir called Lake Kaweah, where most of its water is stored for irrigation and flood control. Formerly the river continued southwest to empty into Tulare Lake, the terminal sink of an endorheic basin also including the Tule and Kern Rivers as well as southern distributaries of the Kings. Agricultural development and diversion for irrigation have left most of the Kaweah's lower course dry, as is Tulare Lake.

The site of Lake Kaweah, in a broad, arid valley in the foothills, was once inhabited by the Yokuts people, who had permanent villages along the river but traveled into the headwaters area in summer. The name "Kaweah" is thought to mean "crow" or "raven cry" in the Yokut language. Eventually, people from the Mono Lake basin began migrating over the Sierra Nevada, settling in the high valleys of the Kaweah's forks. Mineral King on the East Fork of the river was the subject of a silver boom in the 1870s, which soon faded. The majority of the Kaweah drainage basin above the Central Valley became part of Sequoia National Park in 1890, and a road was constructed along parts of the Middle Fork and the Marble Fork. The southeasternmost part of the river's watershed also became part of the park in the 1970s, after a failed proposal to build a massive ski resort, and the Kaweah River is now a popular destination for hiking, fishing and whitewater rafting.

Hamilton Lake at the headwaters of the Middle Fork Kaweah River

The Kaweah River rises in the southernmost part of the Sierra Nevada and flows southwest into the dry endorheic basin of the southern San Joaquin Valley, as do the Kings, Tule, and Kern Rivers, which all begin in or near Sequoia National Park. There are five primary forks to the Kaweah River: the Middle Fork, East Fork, North Fork, South Fork and Marble Fork, ordered by size. The Middle Fork, the largest tributary and sometimes considered the main stem of the Kaweah River, rises along the Great Western Divide, fed by a series of lakes, springs and snowfields. The river flows west, passing Moro Rock and crossing underneath California State Route 198, more commonly known as the Generals Highway (the main road through Sequoia National Park) between the confluence with Paradise Creek and the Marble Fork. It receives the Marble Fork from the right, forming the Kaweah River proper, which soon receives the East Fork from the left near Three Rivers.

The river continues southwest to the confluence with the North Fork from the right, then the South Fork enters from the left just before Lake Kaweah, formed by Terminus Dam, impedes the river’s course. After passing out of the dam, the Kaweah receives Dry Creek from the right then curves south through farmland past the town of Lemon Cove. Cottonwood Creek enters from the right and Yokohl Creek from the left. The river then splits into distributaries, including the St. Johns River and Deep Creek. The main channel continues southwest, joining with the Tule River. In wet years, the river occasionally reaches the now-dry Tulare Lake bed, which even emptied into the San Joaquin River during extreme floods through forks of the Kings River.

The watershed has numerous flora and fauna species, with considerable forested reaches. In the 1909 survey by Willis Linn Jepson there were found to be 20,000 trees (5000 of which were large trees) in the Marble Fork of the Kaweah River. There are also numerous wildflower species including the iconic Yellow Mariposa Lily, Calochortus luteus, which has been specifically noted in the Lime Kiln Creek tributary watershed.[3] The Kaweah River is famous for its stands of giant sequoias, which were one of the reasons for the establishment of the national park. The giant sequoia are native to the western slopes of the Sierra Nevada, and they are especially abundant in the South Sierra, where the Kaweah River flows. 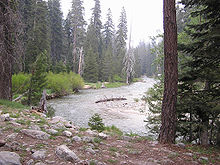 The meaning of the word "kaweah", pronounced "ga-we-hah", in the ancient Yokuts language is "crow" or "raven cry".

The first inhabitants of the Kaweah River Watershed were the Yokuts, who claimed water rights to the entire river. They settled in several villages in the broad, arid valley the Kaweah cuts through the foothills of the Sierra Nevada, in and around the present-day site of Lake Kaweah, an irrigation and water supply lake.[4] The Yokut sub-tribe called the Wukchumni lived in this area; their largest villages included Cobble Lodge at the confluence of the Kaweah River and Horse Creek (a southern tributary), and Slick Rock Village further upstream. Lower on the river were the Fawia, Telamni, Wolasi, Choinok, and Yokod. Further north, in the Kings River watershed, were the Monachi.[5]

Subsisting mostly on acorns, the Yokut ground acorns in mortars with granite pestles, and creating cakes and other foods from the material.They claimed the water rights of the entire Kaweah although in time, tribes from the Mono Basin east of the Sierra Nevada came over the Sierra and settled in the high mountain valleys of the Kaweah. Mineral King, a valley on the East Fork Kaweah River, was a summer settlement for the Yokut. However, several years before the arrival of Europeans, the valley became taboo to them for an unknown reason.

The first known European settler along the Kaweah river was Hale Dixon Tharp in 1856. He settled on Horse Creek near its confluence with the Kaweah River. During the 1860s, other stockman settled along the various forks of the river claiming large areas of land under the Homestead Act of 1862. This act allowed a settler to occupy 160 acres (0.65 km2), or 320 acres (1.3 km2) for a man and wife together. Thus began the settlement of the Kaweah region. Since then, various mining towns (due to the discovery of silver) and small establishments have existed in the area.

There is some fishing and rafting on the river, but access is difficult because some of the land is privately-owned, particularly in the lower portion. There are several companies that offer day trips on the class IV section. The Kaweah River is free-flowing above Lake Kaweah and depending on the winter snowfall, it can rise to very high flows during the spring. It is best if rafters and kayakers have previous experience running class IV because with the fluctuating flows, the river requires great maneuvering and whitewater skills.