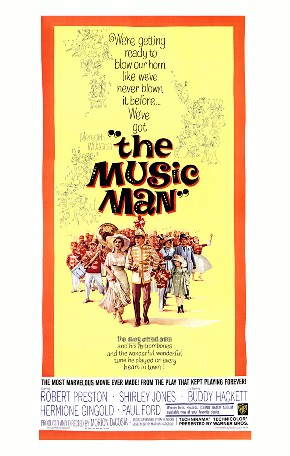 "The Music Man" is a 1962 winning starring Robert Preston as Harold Hill and as Marian Paroo. The film is based on the 1957 Broadway musical of the same name by .

The film was one of the biggest hits of the year and highly acclaimed critically. It also at last made Robert Preston into an "A" list star in motion pictures, after years of appearing in supporting roles in famous films and in starring roles in "B" movies. It also marked one of the first pictures in which Preston's character was not killed off, one of his former screen "trademarks." After the success of the film, Preston began getting much better film roles.

Although Preston scored a great success in the original stage version of the show, he was not first choice for the film version, partly because he was not a box office star. , who was notorious for wanting to film stage musicals with stars other than the ones who played the roles onstage, wanted for the role of Professor Harold Hill, but Meredith Willson insisted upon Preston. ["Making of" featurette included with the 1998 video release] was also "begged" by Warner to play Hill but he declined, saying "nobody could do that role as well as Bob Preston". [cite book
last= Nelson
first= Nancy
title= Evenings with Cary Grant: Recollections in His Own Words and by Those Who Knew Him Best
url=
year= 2003
publisher= Citadel Press
isbn= 080652412X
pages= p. 270]

Unusually for a musical film at the time, , who had directed the show onstage, not only directed the film, but produced it as well, ensuring that the film was extremely faithful to the show. The actress and the Buffalo Bills also reprised their stage roles. All of the show's songs were retained for the film with the exception of "My White Knight", which was replaced by "Being in Love"; this new song included some of the original song's lyrics.

In 2005, "The Music Man" was selected for preservation in the United States by the as being "culturally, historically, or aesthetically significant".

issued the soundtrack album in both and versions.

*The word "" has no meaning and was concocted by Willson for the show.
*Several phrases were altered for the film, as the writers felt they were too obscurely Midwestern to appeal to a broader audience; "Jeely kly!" is Tommy Djilas's catchphrase in the play, while in the film he exclaims, "Great honk!"
*Shirley Jones found out she was pregnant while filming was already underway; the costume designers kept having to adjust her dresses to conceal her pregnancy. In the scene at the footbridge when Marian and Harold embrace, Shirley Jones says that baby Patrick kicked hard enough for Robert Preston to feel him.
*When Harold asks about a "good hotel", the man replies: "Try the Palmer House in Chicago". The in , Illinois was built in 1871; it is now a five-star hotel.
*The of authors seen in the River City Library were popular in Andrew Carnegie Foundation libraries of the era.
*The portrait seen in City Hall and the photograph in the high school is US President .
*"The Music Man" is set in July, 1912.
*The backlot used for River City is also used as Hazzard County in "" and as Stars Hollow in "", which frequently references the film.
*To film the final parade scene in 1962, Jack L. Warner selected the marching bands of the and the . He used many junior high school students from Southern California for the majority of the band. It took about 8 hours of shooting over two days to film the scene.
*All the musical instruments for the production were specially made for the film by the Olds Instrument Company in Fullerton, CA. The instruments were then refurbished and sold by Olds with no indication they were ever used in the film.
*Actor/director 's young role as Winthrop Paroo in the film adaptation was used as -joke in an episode of "", the on which he later played the role of Richie Cunningham. The character's mother comments that the little boy in "The Music Man" looks "so much like Richie when he was little."
*In both the stage play and the movie, the School Board was played by the 1950 International Quartet Champions of the "Society for the Preservation and Encouragement of Barber Shop Quartet Singing in America" (SPEBSQSA), the Buffalo Bills.
*Many members of the Original Broadway cast appear in the film, including Robert Preston, and Susan Luckey.