The New York Athletic Club is a private social club and athletic club in Midtown Manhattan, New York City, New York, USA. It was founded in 1868 and currently has approximately 8,600 members.

NYAC members have won more than 230 Olympic medals. Of those, more than 120 have been gold. Presently, the NYAC has top-ranked competitors in wrestling, judo, rowing, fencing, water polo and track and field, among other sports. Forty NYAC members competed for three countries at the 2008 Olympic Games in Beijing, winning 16 medals.

Fifteen miles north of Manhattan, in Westchester County, the NYAC has a 30 acre facility on Travers Island. It offers tennis, swimming and boating, field sports and many other outdoor activities.[1]

Through at least the 1960s, the NYAC had membership restrictions against blacks and Jews. In 1962, New York Mayor Robert F. Wagner, Jr. quit the NYAC over charges that it barred blacks and Jews.[2][3][4][5] 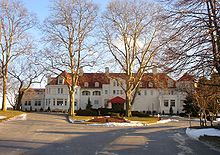 The club operates two facilities, one in New York City and the other on Travers Island which straddles the border of New Rochelle and Pelham Manor, New York.[1]

The City House, located at 180 Central Park South, occupies one of the finest locations in the city. A large, cavernous building built in the early twentieth century, it offers panoramic views of Central Park and is the athletic as well as the social hub of the Club. The architect was Charles W. Clinton. The 24-floor facility includes two restaurants, a cocktail lounge, library, ballroom, billiard room, meeting rooms, and eight floors of guest rooms for members and club guests. The athletic training floors include a swimming pool, basketball courts, boxing rings, a fencing and wrestling room, judo floor, and squash courts.

Named for Wall Street businessman William R. Travers, who arranged for its purchase in 1886, Travers Island is the NYAC's summer home on Long Island Sound. The island is located in the city's Lower Harbor and is situated between Neptune Island, Glen Island and Hunter Island in New York City's Pelham Bay Park.[1] It consists of the Main House and other buildings and facilities that sit on 30 acres (120,000 m2) of handsomely landscaped grounds. Centered around the Main House, the Olympic-sized salt water pool and accompanying cabanas, Travers Island extends the range of NYAC sports to include tennis, rowing, yachting, outdoor swimming and diving, a children's Day Camp, rugby, soccer, croquet and lacrosse.

The NYAC's Mercury Cup series is the premier regional fencing event in North America. The series includes a number of épée and sabre tournaments, ending each season with the famous 'Epeepalooza' and 'Sabrage' events. Competitors earn points based on final placements at each tournament, with the champion being the highest ranked fencer at the conclusion of the season.

The Mercury Cup has proven successful due to the club's prestige, corporate sponsorship, and the event's extraordinarily high-level of competition.

In November 2003, the club was the site of a four game chess match between Garry Kasparov and the computer program X3D Fritz. In November 2005, the Saturday morning program, the children's program run by the club gathered nearly $17,000 dollars for the Ronald McDonald House run, an event which the program has participated in for several years.[citation needed]

The NYAC currently fields 22 different teams for the following sports:[7]