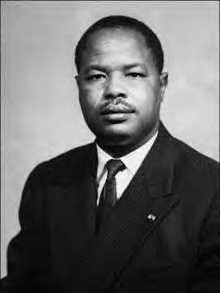 Born in , he entered the politics of during the 1940s. He was elected president of that country when it gained independence in 1960 as leader of the , and persuaded part of to join his country. He was reelected in 1965, 1970, 1975 and 1980, gradually establishing the complete dominance of his own party and outlawing all others in 1976.

He experienced a rebellion in the 1960s from a group known as the , but defeated it by 1970. In the early 1970s he created an unpopular constitution which ended the autonomy of British Cameroon and established unitary rule. Though many of his actions were dictatorial, his country became one of the most stable in Africa.

Ahidjo resigned, ostensibly for health reasons, on , (there are many theories surrounding the resignation; it is generally believed that his French doctor "tricked" Ahidjo about his health [ [http://www.waado.org/nigerian_scholars/archive/debates/constitution/OmoigCoup.html On The Question of Preventing Coups in Nigeria by Nowamagbe A. Omoigui ] ] [ [http://dawodu.com/bakassi3.htm The Bakassi Story ] ] ) and was succeeded by Prime Minister two days later.

Later in 1983, a major feud developed between Ahidjo and Biya. On , Ahidjo went into exile in , and Biya began removing Ahidjo's supporters from positions of power and eliminating symbols of his authority, replacing Ahidjo's portraits with his own and removing Ahidjo's name from the anthem of the CNU. On , Biya announced that a plot allegedly involving Ahidjo had been uncovered. For his part, Ahidjo severely criticized Biya, alleging that Biya was abusing his power, that he lived in fear of plots against him, and that he was a threat to national unity. The two were unable to reconcile despite the efforts of several foreign leaders, and Ahidjo announced on that he was resigning as head of the CNU.

In his remaining years, Ahidjo divided his time between France and . He died in .