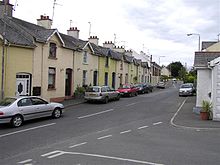 Clady (from Irish: Clóidigh meaning "washing river", or Claddagh meaning "muddy riverbank") is a small village in County Tyrone, Northern Ireland, about 4 miles from Strabane, on the River Finn and the border with County Donegal in the Republic of Ireland. In the 2001 Census it had a population of 423 people. In 1842 the population was 176. It lies within the Strabane District Council area.

The village has been pivotal in more recent times in giving profile to the district by acquiring fame in the All Ireland Top of the Town's variety entertainment competition.

According to Lewis in 1842, close to the village is a handsome bridge of seven arches over the River Finn, connecting Clady with the County Donegal. Before the erection of this bridge, there was an important ford here, which was contested with great slaughter by the partisans of William and James, in 1688; and at the time of the Siege of Derry it was a strong post under Colonel Skeffington, who was driven from it by the Duke of Berwick, a short time before King James II crossed the Finn at this place.

The village is among one of the oldest in the district and was at one time an important bridging point across the Finn when access further down river across the great expanse of the River Foyle was largely dependent on ferry travel. Clady was also an important ecclesiastical centre, being the location for the first Roman Catholic seminary to be established in the Diocese of Derry.

For more information see The Troubles in Clady (Tyrone), which includes a list of incidents in Clady during the Troubles resulting in two or more fatalities.