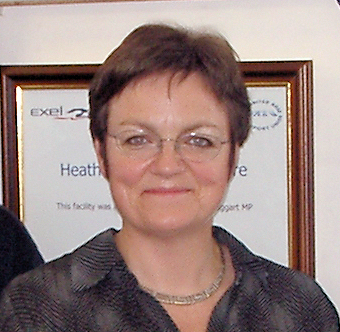 Fiona Margaret Mactaggart (born , ) is a politician in the . She is Labour for the Slough parliamentary constituency.

While at university, she was an outspoken member of the Young Students and Socialists Society and sought to live down her schooling. She read for a BA in English at , a MA at the Institute of Education, Bloomsbury and a PGCE at Goldsmiths College, New Cross. On being a teacher she said "I have a voice that children can hear me at the other end of the playground."Fact|date=July 2007

She was Vice-President and National Secretary of the National Union of Students from 1978 to 1981. She was General Secretary of the Joint Council for the Welfare of Immigrants [http://www.jcwi.org.uk] from 1982-87. She was a teacher in from 1987-92. She was a councillor and Leader of the Labour Group on Wandsworth Council from 1988 to 1990. From 1992-7, she was a Lecturer in at the Institute of Education and Chair of Liberty. While a primary school teacher, she decided to become an MP, as being able to change the world "thirty people at a time"Fact|date=July 2007seemed too slow for her.

She was first elected to Parliament in 1997, being selected from an all-female shortlist. From May 2003 until the Cabinet reshuffle, she served at the as Parliamentary Under-Secretary of State with responsibility for and Offender Management. She is on the .

Her father, the late Sir Bt, was a multimillionaire Glasgow property developer, Conservative candidate and Eurosceptic. Her mother's father, Bt, was a Conservative Member of Parliament for 27 years. Her great-grandfather however was Sir , the first treasurer of the first branch of 's Labour Party. Her father left her a fifth of his £6.5m estate, and it is thought she is the second richest Labour MP. She suffers from . She is not married and has no children, being infertile. Her twin sister stood as a Parliamentary candidate for the Liberal Democrats in Devizes in the 1992 General Electionfact|date = September 2007.