A molecular logic gate is a molecule that performs a logical operation on one or more logic inputs and produces a single logic output. Much academic research is dedicated to the development of these systems and several prototypes now exist. Because of their potential utility in simple arithmetic these molecular machines are also called moleculators. 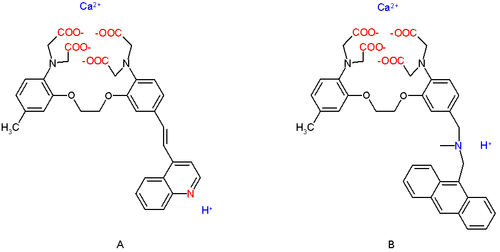 Compound A is a push-pull olefin with the top receptor containing four carboxylic acid anion groups (and non-disclosed counter cations) capable of binding to calcium. The bottom part is a quinoline molecule which is a receptor for hydrogen ions. The logic gate operates as follows.

Without any chemical input of Ca2+ or H+, the chromophore shows a maximum absorbance in UV/VIS spectroscopy at 390 nm. When calcium is introduced a blue shift takes place and the absorbance at 390 nm decreases. Likewise addition of protons causes a red shift and when both cations are in the water the net result is absorption at the original 390 nm. This system represents a XNOR logic gate in absorption and a XOR logic gate in transmittance.

In compound B the bottom section now contains a tertiary amino group also capable of binding to protons. In this system fluorescence only takes place when both cations are present and therefore the system represents an AND logic gate.

With both systems run in parallel and with monitoring of transmittance for system A and fluorescence for system B the result is a half-adder capable of reproducing the equation 1+1=2.

In a modification of system B not two but three chemical inputs are simultaneously processed in an AND logic gate [2]. An enhanced fluorescence signal from the compound depicted below is obtained only in the presence of hydrogen, zinc and sodium ions through interaction with respectively the amine, carboxylate and crown ether receptors and this system can be potentially applied in disease screening (lab-on-a-molecule) because these ions are all physiologically relevant.

In another XOR logic gate system the chemistry is based on the pseudorotaxane [3] depicted in scheme 3. In organic solution the electron deficient diazapyrenium salt (rod) and the electron rich 2,3-dioxynaphthalene units of the crown ether (ring) self-assemble by formation of a charge transfer complex.

An added tertiary amine like tributylamine forms a 1:2 adduct with the diazapyrene and the complex gets dethreaded. This process is accompanied by an increase in emission intensity at 343 nm resulting from freed crown ether. Added trifluoromethanesulfonic acid reacts with the amine and the process is reverted. Excess acid locks the crown ether by protonation and again the complex is dethreaded. 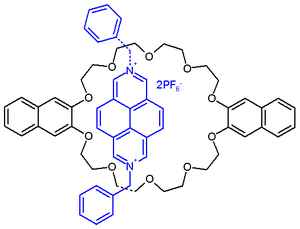 A Molecular Photoionic AND Gate Based on Fluorescent Signaling