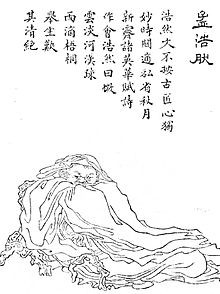 Meng Haoran (Chinese: 孟浩然; pinyin: Mèng Hàorán; Wade-Giles: Meng Hao-jan; Japanese: Mōkōnen) (689 or 691 – 740) was a Chinese poet during the Tang Dynasty. Unsuccessful in his official career, he mainly lived in and wrote about his birthplace.

The eldest of the major High Tang poets, he was born in Xiangyang, Hubei, and was strongly attached to the area. He lived there almost all his life, and its landscape, history and legends are the subjects of many of his poems. Particularly prominent are Nanshan (or South Mountain, his family seat) and Lumen Shan, where he briefly lived in retreat.

He had an unsuccessful civil service career, passing the Jinshi exam late, at the age of 39. He received his first and last position three years before his death, but resigned after less than a year.

He is often bracketed with Wang Wei, due to the friendship they shared and their prominence as landscape poets. In fact, Haoran composed several poems about Wei and their separation. While Wei focused on the natural world, in particular the solitude and reprieve it granted from human life along with the scale of the natural world, Meng Haoran focuses more on foreground details and human life.

His works are generally considered less consistently successful than Wang's.