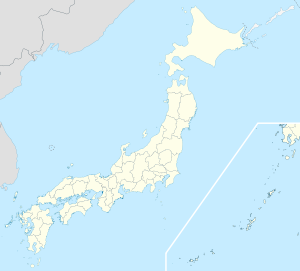 Japan Airlines Flight 123 was a Japan Airlines domestic flight from Tokyo International Airport (Haneda) to Osaka International Airport (Itami) on August 12, 1985. The Boeing 747-146SR that made this route, registered JA8119, suffered mechanical failures 12 minutes into the flight and 32 minutes later crashed into two ridges of Mount Takamagahara in Ueno, Gunma Prefecture, 100 kilometers (62 mi) from Tokyo. The crash site was on Osutaka Ridge (御巣鷹の尾根, Osutaka-no-One?), near Mount Osutaka. All 15 crew members and 505 out of 509 passengers died, resulting in a total of 520 deaths and four survivors.

It is currently the deadliest single-aircraft accident in history, and the second deadliest plane crash in history behind the Tenerife airport disaster.[1]

The flight was around the Obon holiday period in Japan, when many Japanese people make yearly trips to their hometowns or resorts.[3] Twenty-one non-Japanese boarded the flight.[4] The four survivors, all female, were seated on the left side and towards the middle of seat rows 54–60, in the rear of the aircraft.[5] The survivors were Yumi Ochiai (落合 由美, Ochiai Yumi?), an off-duty JAL flight attendant, age 25, who was jammed between a number of seats; Hiroko Yoshizaki (吉崎 博子, Yoshizaki Hiroko?), a 34-year-old woman and her 8-year-old daughter Mikiko Yoshizaki (吉崎 美紀子, Yoshizaki Mikiko?), who were trapped in an intact section of the fuselage; and a 12-year-old girl, Keiko Kawakami (川上 慶子, Kawakami Keiko?), who was found wedged between branches in a tree.[6] Among the dead were the famous singer Kyu Sakamoto (of Sukiyaki fame) and Japanese banker Akihisa Yukawa, the father of solo violinist Diana Yukawa.[7]

The flight took off from Runway 16L[8] at Tokyo International Airport (commonly referred to as Haneda Airport) in Ōta, Tokyo, Japan at 6:12 p.m., 12 minutes behind schedule.[9] About 12 minutes after takeoff, as the aircraft reached cruising altitude over Sagami Bay, the rear pressure bulkhead was torn open. The resulting explosive decompression tore the tailfin from the aircraft and severed all four of the aircraft's hydraulic systems. A photograph taken from the ground some time later confirmed that the vertical stabilizer was missing.[10] The loss of cabin pressure at high altitude had also caused a lack of oxygen throughout the cabin, and emergency oxygen masks for passengers soon began to fall. Flight attendants, including one who was off-duty and flying as a passenger, administered oxygen to various passengers using hand-held tanks.[3] 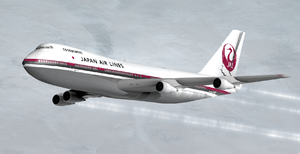 Illustration of JA8119, during breakup of the vertical stabilizer

The pilots, including Captain Masami Takahama (高浜 雅己, Takahama Masami?),[8][11] first officer Yutaka Sasaki (佐々木 祐, Sasaki Yutaka?), and flight engineer Hiroshi Fukuda (福田 博, Fukuda Hiroshi?),[3] set their transponder to broadcast a distress signal to Tokyo Area Control Center, which directed the aircraft to descend and gave it heading vectors for an emergency landing. Continued control problems required them to first request vectors back to Haneda, then to Yokota (a U.S. military air base), then back to Haneda again as the aircraft wandered uncontrollably.[citation needed]

By then all hydraulic fluid had drained away through the rupture. With total loss of hydraulic control and non-functional control surfaces, the aircraft began to oscillate up and down in a phugoid cycle. The pilots managed a measure of control by using differential engine thrust. These improvisations proved helpful, but further measures to exert control, such as lowering the landing gear and flaps, interfered with control by throttle, and the plane's uncontrollability once again escalated.[citation needed]

After descending to 13,500 feet (4100 m), the pilots reported the aircraft's uncontrollability. The plane flew over the Izu Peninsula, headed for the Pacific Ocean, then turned back towards the shore and descended to below 7,000 feet (2100 m) before the pilots managed to return to a climb. The aircraft reached an altitude of 13,000 feet (4000 m) before entering an uncontrollable descent into the mountains and disappearing from radar at 6:56 p.m. and 6,800 feet (2100 m). The final moments of the plane occurred when it clipped one mountain ridge then crashed into a second one during another rapid plunge, then flipped and landed on its back.[citation needed] The aircraft's crash point, at an elevation of 1,565 metres (5,135 ft), is located in Sector 76, State Forest, 3577 Aza Hontani, Ouaza Narahara, Ueno Village, Tano District, Gunma Prefecture. The east-west ridge is about 2.5 kilometres (8,200 ft) north north west of Mount Mikuni.[12] Ed Magnuson of Time magazine said that the area where the aircraft crashed was referred to as the "Tibet" of Gunma Prefecture.[8]

Thirty-two minutes elapsed from the time of the bulkhead explosion to the time of the final crash, long enough for some passengers to write farewells to their families.[3][13] Subsequent simulator re-enactments of the mechanical failures suffered by Flight 123 failed to produce a better solution or outcome, and in fact none of the four flight crews in the simulations were able to keep the plane aloft for as long as the 32 minutes achieved by the actual crew.[3]

United States Air Force controllers at Yokota Air Force base situated near the flight path of Flight 123 had been monitoring the distressed aircraft's calls for help. They maintained contact throughout the ordeal with Japanese flight control officials and made their landing strip available to the airplane. After losing track on radar, a U.S. Air Force C-130 from the 345 TAS was asked to search for the missing plane. The C-130 crew was the first to spot the crash site 20 minutes after impact, while it was still daylight. The crew radioed Yokota Air Base to alert them and directed a USAF Huey helicopter from Yokota to the crash site. Rescue teams were assembled in preparation to lower Marines down for rescues by helicopter tow line. The offers by American forces of help to guide Japanese forces immediately to the crash site and of rescue assistance were rejected by Japanese officials. Instead, Japanese government representatives ordered the U.S. crew to keep away from the crash site and return to Yokota Air Base, stating the Japan Self-Defense Forces (JSDF) were going to handle the entire rescue alone.[citation needed]

Although a JSDF helicopter eventually spotted the wreck during the night, poor visibility and the difficult mountainous terrain prevented it from landing at the site. The pilot of the JSDF helicopter reported from the air that there were no signs of survivors. Based on this report, JSDF ground personnel did not set out to the actual site the night of the crash. Instead, they were dispatched to spend the night at a makeshift village erecting tents, constructing helicopter landing ramps and in other preparations, all some 63 kilometers from the wreck. JSDF did not set out for the actual crash site until the following morning. Medical staff later found a number of passengers' bodies whose injuries indicated that they had survived the crash only to die from shock or exposure overnight in the mountains while awaiting rescue.[6] One doctor said "If the discovery had come ten hours earlier, we could have found more survivors." [14]

Yumi Ochiai, one of the four survivors out of 524 passengers and crew, recounted from her hospital bed that she recalled bright lights and the sound of helicopter rotors shortly after she awoke amid the wreckage, and while she could hear screaming and moaning from other survivors, these sounds gradually died away during the night.[6]

An animation of the aircraft's tailstrike incident

The official cause of the crash according to the report published by Japan's then Aircraft Accidents Investigation Commission is as follows:

The Japanese public's confidence in Japan Airlines took a dramatic downturn in the wake of the disaster, with passenger numbers on domestic routes dropping by one-third. Rumors persisted that Boeing had admitted fault to cover up shortcomings in the airline's inspection procedures, thus protecting the reputation of a major customer.[6] In the months after the crash, domestic traffic decreased by as much as 25%. In 1986, for the first time in a decade, fewer passengers boarded JAL's overseas flights during New Years than the previous year. Some of them considered switching to All Nippon Airways as a safer alternative.[17]

Without admitting liability, JAL paid ¥780 million to the victims' relatives in the form of "condolence money". Its president, Yasumoto Takagi, resigned, while a maintenance manager working for the company at Haneda committed suicide to apologize for the accident.[6]

In the summer of 2009, stairs with a handrail were installed to facilitate visitors' access to the crash site. Japan Transport Minister Seiji Maehara visited the site on August 12, 2010 to pray for the victims.[18]

Beginning in 2007, British academic Christopher Hood began writing a book on the crash and its effect on Japanese society.[19] The book, entitled Dealing with Disaster in Japan: Responses to the Flight JL123 Crash, was published by Routledge in September 2011.[20]

The crash also led to the 2006 opening of the Safety Promotion Center.[21][22] It is located in the Daini Sogo Building on the grounds of Tokyo International Airport.[23] This center was created for training purposes to alert employees of the importance of airline safety and their personal responsibility to ensure safety. The center, which has displays regarding air safety, the history of the crash, and selected pieces of the aircraft and passenger effects (including handwritten farewell notes), is also open to the public by appointment made one day prior to the visit.

Japan Airlines Flight 123 is featured in the TV series Mayday (called Air Emergency in the U.S. and Air Crash Investigation in other countries outside Canada) 3rd season episode 3 "Out of Control (Japanese title "御巣鷹の尾根 (Osutaka-no-One?)")".

The crash is also the subject of a BBC television documentary (Disaster: JAL 123 – A Japanese Tragedy) first shown in 1999. The documentary highlights Japan's alleged refusal for a US military helicopter to provide assistance two hours after the crash and concludes by drawing parallels with Japan's reluctance to accept foreign help in the wake of the Great Hanshin Earthquake in 1995.

To date three films have been made about Japan Airlines Flight 123. Osutakayama, directed by Fumiki Watanabe (渡辺文樹, Watanabe Fumiki?), was released in 2005. The central theme of this film is that the plane was shot down following orders from Prime Minister Yasuhiro Nakasone. Climber's High (クライマーズ・ハイ, Climber's High?) was released in 2008. This film is based on the novel by Hideo Yokoyama. The novel and film revolve around the reporting of the crash at the fictional Kita-Kanto Shimbun. Yokoyama was a journalist at the Jōmō Shimbun at the time of the crash.

In 2009, Shizumanu Taiyō, starring Ken Watanabe, was released to national distribution in Japan. The film, which does not mention JAL by name, instead using the name "National Airlines", gives a semi-fictional account of internal airline corporate disputes and politics surrounding the crash. JAL did not cooperate with the making of the film.[24] JAL criticized the film, saying that it, "not only damages public trust in the company but could lead to a loss of customers."[25]

The last 38 seconds of the cockpit voice recording appeared on certain pressings of the album Reise, Reise by Rammstein. The final 2 minutes of the recording, with English subtitles, are also available on YouTube.

The cockpit voice recording of the incident also became part of the script of a play called Charlie Victor Romeo.

The crash of Flight 123 is thought to be an inspiration for the visual novel Remember11, which begins with the crash of a passenger plane on an Aomori mountain, killing all but four survivors.