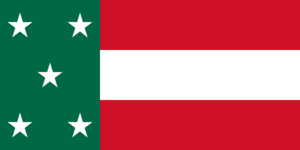 Yucatán is one of the 31 states of , located on the north of the . The Yucatan peninsula includes three states: Yucatán, , and ; all three modern states were formerly part of the larger historic state of Yucatán in the 19th century. The state capital of Yucatán is Mérida.

The State of Yucatán is located on the . It borders the states of to the southwest, to the east and southeast, and the to the north and west. As a whole, the state is extremely flat with little or no topographic variation. The exception are the hills, located in the southern portion of the state.

The Constitution of the State of Yucatán provides that the of Yucatán, like the government of every other state in Mexico, consists of three powers: the executive, the legislative and the .

The most recent local election in Yucatán was held on , . ("See main article: .")

Yucatecan food is its own unique style and is very different from what most people would consider "Mexican" food. It includes influences from the local Mayan culture, as well as Caribbean, Mexican, European (French) and Middle Eastern cultures.

There are many regional dishes. Some of them are:

*"Poc Chuc", a Mayan/Yucateco version of barbecued pork.
*"Salbutes and Panuchos". Salbutes are soft, cooked tortillas with lettuce, tomato, turkey and avocado on top. Panuchos feature fried tortillas filled with black beans, and topped with turkey or chicken, lettuce, avocado and pickled onions. chiles accompany most dishes, either in solid or purée form, along with fresh limes and corn tortillas.
*"Queso Relleno" is a "gourmet" dish featuring ground pork inside of a carved edam cheese ball served with tomato sauce
*"Pavo en Relleno Negro" is turkey meat stew cooked with a black paste made from roasted chiles, a local version of the mole de guajalote found throughout Mexico. The meat soaked in the black soup is also served in tacos, sandwiches and even in panuchos or salbutes.
*"Sopa de Lima" A turkey, lime and tortilla soup.
*"Papadzules". Egg tacos bathed with Pumpkin Seed sauce and Tomatoes.
*"Cochinita Pibil" is a marinated pork dish and by far the most renowned from the Yucatecan food.
*"Xcatik" is some kind of chilli.

Before the arrival of the Spanish in the area, Yucatán was the home of the , and in particular the Yucatecan . Archaeological remains show ceremonial architecture dating back some 3000 years; some Maya hieroglyphic inscriptions found in the area date back to the Maya Preclassic period (200 B.C.). Maya cities of Yucatán continued to flourish after the central and southern lowland Classic period Maya cities collapsed (c. A.D. 900), including the flouresence during the Terminal Classic, the rise of at roughly the same time, and the subsequent rise of other sites, such as , during the Postclassic. Several sites continued to be occupied up to and beyond the 16th century arrival of the Spanish. The ruins of well over a hundred Maya sites of varying sizes can still be found on the peninsula, such as and , though most sites have not been extensively investigated. Other important ancient Maya cities were built over by the Spanish, and their sites are still occupied today, such as ("Itsmal" in Yucatecan Maya) and Mérida ("T'ho" in Yucatecan Maya).

Arrival of the Spanish

:"See also: ".According to ' first letter () to the King of Spain, "Yucatan" represents a mis-naming of the land by his political antagonist Diego Velázquez. Cortés alleges that when Velazquez initially landed in Yucatan and asked about the name of the well-populated land, the indigenous people answered, "We don't understand your language." This was supposedly rendered as Yucatan by the Spaniards, who were unfamiliar with the phonetics of Mayan. However, there was political antagonism between Cortés and Velázquez, and this story evidently represents an attempt to defame Velázquez. The actual source of the name "Yucatan" is the Nahuatl (Aztec) word "Yokatlān", "place of richness."

The conquest of the Maya city-states took decades of long fighting.

African slaves brought by the Spanish also played a major role during Yucatan conquest, many of them declaring themselves free after a revolt led by took place. A lot of the freed slaves settled in small towns called Palenques and declared themselves independent. They also interacted with the indigenous Maya mixing both cultures in to what is now know as or ancestry. Fact|date=July 2007

Three Spanish expeditions explored the coastal areas of Yucatan from 1517 to 1519, but no major effort was made to conquer the country until 1527 when the first expedition under landed with Spanish crown authority to conquer and colonize Yucatán. While the chiefs of some states quickly pledged allegiance to the Spanish crown, others waged war against the Spanish. Montejo was forced to retreat from Yucatán in 1528. He came back with a large force in 1531, briefly established a capital at Chichén Itzá, but was again driven from the land in 1535. Montejo turned over his rights to his son, also named Francisco, who invaded Yucatán with a large force in 1540. In 1542 the younger Montejo set up his capital in the Maya city of T'ho, which he renamed Mérida. The lord (also known as Tutul Xiu in the ) of Mani converted to and became an ally, which greatly assisted in the conquest of the rest of the peninsula. When the Spanish and Xiu defeated an army of the combined forces of the states of eastern Yucatán in 1546, the conquest was officially complete.

As of 1564 Yucatan became a captaincy general and from 1786 an "intendencia", as a result of the in the administration of the Indies.

The Spaniards were granted land and natives to work it for their benefit. Priests and monks set to bringing the population into the . The first of Yucatán, , burned all the Maya books that could be located (saying "they contained nothing but the lies of the ") and suppressed any remnants of pagan beliefs with such vigour that he was for a time recalled to Spain to answer charges of improper harshness. The book he wrote (in the 1560s) in his defense, "Relación de las cosas de Yucatán" ("Relation of the Things of Yucatán"), is one of the single-most detailed accounts of Yucatán and of indigenous life from the time of the Conquest. Segments of this work would much later prove to be of instrumental value in the much-later of the pre-Columbian Maya .

While the Maya embraced , many took it on as an addition to rather than a replacement of pre-Columbian beliefs, and some Christian Maya continue to offer prayers to the ancient agricultural deities in addition to the Christian God and saints.

There were periodic native revolts against Spanish rule, including a large one led by Can Ek in 1761.

Independence and the turbulent 1840s

In February 1821, Mexico achieved independence from Spain. On of that year, Yucatán became part of independent Mexico. The State of Yucatán at that time included the territory of what is now the states of Campeche and Quintana Roo as well.

In 1835, a conservative unitary system of government was instituted in Mexico (a centralized dictatorship unconstitutionally brought forth and held by the then-President: Santa Anna). Yucatán became a department, and authority was imposed from the center. Discontent increased and an insurrection erupted in in May 1838, advocating Yucatecan independence. In 1840, the local Congress approved a declaration of independence of Yucatán. At first, Governor blocked it, saying that Yucatán would again recognize the rule of the central government in Mexico City if the Mexican Constitution of 1824 were reinstated. , sent to Mérida in 1841 by President , succeeded in settling the differences and signed a treaty with the local government. of stars in a green field. The Yucatecan Constitution was modeled in part on the 1824 Mexican Constitution and the Yucatán state constitution of 1825.

Santa Anna refused to recognize Yucatán's independence, and he barred Yucatecan ships and commerce in Mexico and ordered Yucatán's ports blockaded. He sent an army to invade Yucatán in 1843. The Yucatecans defeated the Mexican force, but the loss of economic ties to Mexico deeply hurt Yucatecan commerce. Yucatán's governor decided to use the victory as a time to negotiate with Santa Anna's government from a position of strength. It was agreed that Yucatán would rejoin Mexico so long as various assurances of right to self-rule and adherence to the 1825 Constitution within the Peninsula were observed by Mexico City. The treaty reincorporating Yucatán into Mexico was signed in December 1843.

Once more, the central government rescinded earlier concessions and in 1845 Yucatán again renounced the Mexican government, declaring independence effective . When the broke out, Yucatán declared its neutrality.

In 1847 the so-called "Caste War" ("Guerra de Castas") broke out, a major revolt of the against the Hispanic population in political and economic control. At one point in 1848, this revolt was successful to the point of driving all Hispanic Yucatecans out of almost the entire peninsula other than the walled cities of Mérida and Campeche.

The government in Mérida appealed for foreign help in suppressing the revolt, with Governor Méndez taking the extraordinary step of sending identical letters to Britain, , and the , offering sovereignty over Yucatán to whatever nation first provided sufficient aid to quash the Maya revolt. The proposal received serious attention in &mdash;the Yucatecan ambassador was received by US President and the matter was debated in the Congress, with no action taken other than an invocation of the to warn off any European power from interfering in the peninsula.

After the end of the Mexican-American War, Governor Barbachano appealed to Mexican President for help in suppressing the revolt, and in exchange Yucatán again recognized the central government's authority. Yucatán was again reunited with Mexico on .

Frequent skirmishes and occasional large battles between the forces of the Yucatecan government and independent Maya of the eastern part of the peninsula continued through 1901, when the Mexican army occupied the Maya capital of . Some Maya communities in Quintana Roo continued to refuse to acknowledge Ladino or Mexican sovereignty as late as the 1910s.

In 1857 broke off from Yucatán to become a separate state. On , , President proclaimed the creation of the territory of , separating that territory from the state of Yucatán.

for making rope was probably the first major export crop of the Yucatán Peninsula. The region prospered from this lucrative crop until alternative materials came into wider use after and (sometimes called "green gold") was planted in other places around the world, setting up competing industries. The decades of the henequen boom was a fairly progressive era for Yucatán; the city of Mérida had electric streetlights and trolley cars before . It is said there were more millionaires in Mérida at that time than anywhere else in the Americas. Today, the Paseo de Montejo, an avenue patterned after the in Paris, is lined with both abandoned and renovated mansions from that era. And the Yucatan countryside has over 300 , also built during that time, which are also in varying states of disrepair and renovation.

Until the mid-20th century most of Yucatán's contact with the outside world was by sea; trade with the USA and , as well as Europe and other Caribbean islands, was more significant than that with the rest of Mexico. In the 1950s Yucatán was linked to the rest of Mexico by railway, followed by highway in the 1960s, ending the region's comparative isolation. Today Yucatán still demonstrates a unique culture from the rest of Mexico, including its own style of food.

Commercial jet airplanes began arriving in Mérida in the 1960s, and additional international airports were built first in and then in the new planned resort community of in the 1980s, making tourism a major force in the economy of the Yucatán Peninsula.

The first Maya governor of Yucatán, , was elected in 1976.

Today, the Yucatán Peninsula is a major destination, as well as home to one of the largest indigenous populations in Mexico, the Maya people.