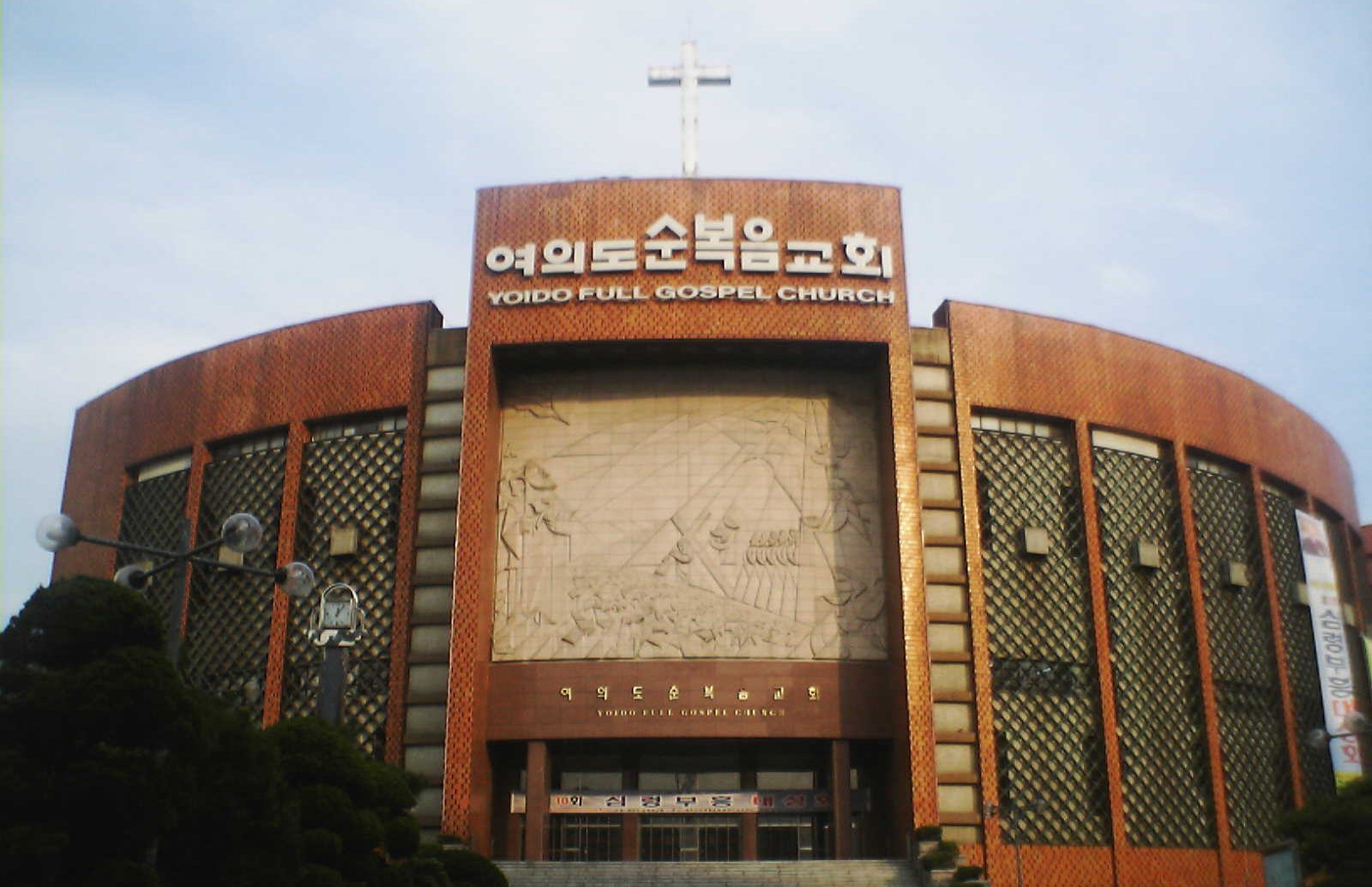 Yoido Full Gospel Church is a Christian church on in , . With about 830,000 members (2007), it is the largest Christian congregation in South Korea.

The Yoido Full Gospel Church was founded by and his mother-in-law, Choi Ja-shil (최자실), both pastors. On , a worship service was held in the home of Choi Ja-shil. Apart from the two pastors, only Choi Ja-shil's three daughters (one of whom later married David Yonggi Cho) and one elderly woman, who had come in to escape from the rain, attended the first service. The two pastors began a vigorous campaign of knocking on doors, providing spiritual and humanitarian help to the poor, and praying for the sick. Within months, the church had grown to fifty members, too many to accommodate in Choi Ja-shil's living room. Worship services were accordingly moved to a tent pitched in her backyard. As the church continued to grow over the following months and years, the church outgrew one tent after another.

Pastor David Yonggi Cho began preaching on the Three-Fold (the blessing of the spirit, soul, and body), proclaiming that physical health and financial prosperity are as much a part of God's will for Christians as the salvation of the soul. Inspired by his message of hope and monetary wealth, many previously uncommitted people joined the church, and by the beginning of 1961, membership had grown to a thousand.Fact|date=September 2008 Having grown too large for its tent, the church purchased its first plot of land, at (서대문).

The church's plans for expansion suffered a setback when Pastor Cho was called up for mandatory military service. Fortunately for the church, he was assigned to an American Army base near Seoul, allowing him to continue with his Sunday preaching, with the help of John Hurston, an American missionary. Cho's spell in the army turned out to be short-lived, as ill-health required a major operation and a subsequent discharge from the army. Although ill, Cho continued to pastor the church, and on , an inaugural service was held in the new auditorium that had been built on the plot of land the church had purchased at Seodaemun.Fact|date=September 2008 It was named the Full Gospel Revival Center.

Church membership continued to grow, reaching three thousand by 1964 and eight thousand by 1968.Fact|date=September 2008 Cho continued to be plagued by ill health, and he suffered a physical collapse while leading a baptismal service one Sunday.Fact|date=September 2008 At this time, Cho decided to restructure the church.when Cho divided the city of Seoul into zones, with church members in each zone comprising a "cell" that would meet on a weekday for worship and bible study in the home of a "cell leader." Cell members were encouraged to invite their friends to attend cell meetings to learn about Christianity. Each cell leader was instructed to train an assistant. When cell membership reached a certain number, it would be divided, with about half of its members joining the new cell led by the person who had been the assistant. Cho later wrote a book in English about this concept of "cell multiplication", which has since been emulated by churches throughout the world.Fact|date=September 2008

Some of Cho's methods were controversial.Fact|date=September 2008 He believed that women would make ideal cell leaders, having both the time and the desire to make home visits to other members, something that many men, for reasons pertaining to Korean culture as it was at that time, were unwilling to do. His decision to appoint women as cell leaders, went against the grain of Korean culture, which at that time was not open to the idea of women leading groups that had male members. He persisted, and the cell concept turned out to be an outstanding success. From 125 cells in 1967, the church has grown to several thousand cells today.Fact|date=September 2008

Aside from restructuring as a cell-based church, a Women's Fellowship was started in 1960, followed by a Men's Fellowship in 1963, to enable lay members to serve the church in a wide range of volunteer capacities. A church magazine, "Faith" was also started in 1967. Containing Bible studies, testimonies, and evangelistic messages, this monthly periodical soon spread far beyond Seoul.

Membership continued to grow exponentially, reaching ten thousand in the early 1970s. Having outgrown its Seodaemun premises, the church began looking for a new place to build.

(여의도), in the middle of the Han River which winds its way through the heart of Seoul, was at that time little more than sand dunes, without even a bridge to connect it to the city of Seoul. Believing that he had heard from God, Cho and the other leaders of the church decided to purchase a plot of land on Yoido Island. Economic problems, including the 1973 "oil shock" which led to spiraling inflation and the loss of jobs for many church members, delayed construction of the new auditorium. However, it was finally finished in 1973, and its inaugural worship service was held on of that year. A month later, Full Gospel Central Church, as it was now known, hosted the 10th at the . Fifty-five thousand attended, including five thousand foreigners.

Membership of Full Gospel Central Church reached fifty thousand by 1977, a figure which doubled in only two years. On , membership topped 200 000. By this time, it was the largest single congregation in the world and was recognized as such by the "". A special worship service was held to celebrate this milestone, with , President of the Businessmen's Fellowship International as the guest speaker.

Beginning in the 1980s, Full Gospel Central Church decided to establish satellite churches throughout the city of Seoul and further afield, as it would not be able to keep on expanding indefinitely. Despite the expansion of the auditorium to seat 12,000 in 1983, seven Sunday services were insufficient to accommodate the entire membership. As exponential growth continued, reaching 700 000 by 1992, the need for satellite churches became more pressing. Despite the drain of members to the satellite churches, however, new recruits by the mother church - brought in through the vast cell network - have made up for the losses, and membership stood at 780,000 in 2003. The church was renamed Yoido Full Gospel Church in the 1990s. Its founder, Mr David Yonggi Cho, has retired as head pastor several times, but the church has run into immediate infighting among the remaining ministers, causing him to come out of retirement, most recently late in 2006. As of 2007, membership stands at 830,000, with seven Sunday services translated into 16 languages.

In the heart of Seoul, the Yoido Full Gospel Church sits directly across from Korea's National Assembly. The building is large enough to seat 26,000 people, with overflow sent to nearby buildings who watch events in the main church on telescreens.

Ministries of the church

Yoido Full Gospel Church has established many ministries as part of its outreach program, both locally and internationally. A representative sample of them follows:

*In March 1973, the Osanri Prayer Mountain was founded. Comprising tiny cubicles in which people may lock themselves to fast and pray, Prayer Mountain now receives more than a million visitors a year, including some 50,000 foreigners.
*In November 1976, International, an organization dedicated to teaching the principles of evangelism and church growth to pastors all over the world, was established.
*A ten-story World Evangelical Center, an educational institution attached to the church, was opened on .
*A television studio, opened on , was built to broadcast the worship services both nationally and internationally.
*The Full Gospel Educational Research Institute, now the International Theological Institute, to promote evangelism and theological training.
*In January 1986, Elim Town, a facility for the elderly, the young, the homeless, and the unemployed, was set up under the auspices of the church. The latter would be given training and a choice of four occupations. In March of the same year, the church established .

In March 1996, the Seoul Company published a 21-volume collection of Pastor David Yonggi Cho's sermons, delivered over his ministry of thirty-eight years. What the church regarded as a crowning honour came in September 1992, when Pastor Cho was elected Chairman of the . This was the first time that international leadership of the denomination of fifty million members in sixty countries had passed out of American hands. He served in this capacity until August 2000. Pastor David Yonggi Cho, now assisted by a total of 171 associate pastors and 356 lay pastors, continues to lead the Yoido Full Gospel Church, whose status as the world's largest congregation has been recognized by the .

* – an overview of the history and social impact of Christianity in Korea.
* – a biography of the Senior Pastor of Yoido Full Gospel Church.
*
*
*