Purple
This article is about the color. For other uses, see Purple (disambiguation).

Purple is a range of hues of color occurring between red and blue,[1] and is classified as a secondary color as the colors (blue and red) are required to create the shade.

In art, purple is acknowledged as the color on the color wheel between magenta and violet and its tints and shades.[3]

The word 'purple' comes from the Old English word purpul which derives from the Latin purpura, in turn from the Greek πορφύρα (porphura),[4] name of the Tyrian purple dye manufactured in classical antiquity from a mucus secreted by the spiny dye-murex snail.[5][6] 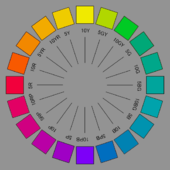 The hues of the Munsell color system, at varying values, and maximum chroma to stay in the sRGB gamut.

The Munsell color system is a color space that specifies colors based on three color dimensions: hue, value (lightness), and chroma (color purity), spaced uniformly in three dimensions in the elongated oval at an angle shaped Munsell color solid according to the logarithmic scale which governs human perception. In order for all the colors to be spaced uniformly, it was found necessary to use a color wheel with five primary colors—red, yellow, green, blue, and purple. The Munsell colors displayed are only approximate as they have been adjusted to fit into the sRGB gamut.

On a chromaticity diagram, the straight line connecting the extreme spectral colors (red and violet) is known as the line of purples (or 'purple boundary'); it represents one limit of human color perception. The color magenta used in the CMYK printing process is near the center of the line of purples, but most people associate the term "purple" with a somewhat bluer tone, such as is displayed by the color "electric purple" (a color also directly on the line of purples), shown below. Some common confusion exists concerning the color names "purple" and "violet". Purple is a mixture of red and blue light, whereas violet is a spectral color.

On the CIE xy chromaticity diagram, purple shades located on the straight line connecting the extreme colors red and violet; this line is known as the line of purples, or the purple line.[8][9]

Purple (HTML/CSS color) (patriarch) is used in HTML and CSS actually is deeper and has a more reddish hue (#800080) than the X11 color purple known as purple (X11) (#A020F0), which is bluer and brighter. A traditional name sometimes used for this tone of purple is patriarch. The first recorded use of patriarch as a color name in English was in 1925.[10]

This shade is precisely halfway between violet and magenta, being the artistic definition of purple.[12] This shade has also been referred to by Robert Ridgway in his 1912 book Color Standards and Color Nomenclature as true purple.[13]

The pure essence of purple was approximated in pigment in the late 1960s by mixing fluorescent magenta and fluorescent blue pigments together to make fluorescent purple to use in psychedelic black light paintings. The shade is also referred to as phlox, as it is the color of the phlox flower. The first recorded use of phlox as a color name in English was in 1918.[14]

The color heliotrope is a brilliant tone of purple; it is a pink-purple tint that is a representation of the color of the heliotrope flower. The first recorded use of heliotrope as a color name in English was in 1882.[15]

The traditional name for this tone of purple is veronica. The first recorded use of veronica as a color name in English was in 1919.[16]

The first recorded use of royal purple as a color name in English was in 1661.[17]

Thistle is a pale purplish color resembling the thistle plant. The first recorded use of Thistle as a color name in English was in 1892.[18] The color thistle is associated with Scotland as the thistle is the national flower of Scotland (Scotland's highest state decoration is also the Order of the Thistle).

The shade violet is a spectral color (approximately 380–420 nm), of a shorter wavelength than blue, while purple is a combination of red and blue or violet light.[19] The purples are colors that are not spectral colors – purples are extra-spectral colors. In fact, purple was not present on Newton's color wheel (which went directly from violet to red), though it is on modern ones, between red and violet. There is no such thing as the "wavelength of purple light"; it only exists as a combination.[2] Pure violet cannot be reproduced by a Red-Green-Blue (RGB) color system, but it can be approximated by mixing blue and red. The resulting color has the same hue but a lower saturation than pure violet. One psychophysical feature of the two colors that can be used to separate them is their appearance with increase of light intensity. Violet, as light intensity increases, appears to take on a far more blue hue as a result of what is known as the Bezold-Brücke shift.

The pansy flower has varieties that exhibit three different colors: pansy (a color between indigo and violet), pansy pink, and pansy purple. The first recorded use of pansy purple as a color name in English was in 1814.[21]

The first recorded use of mulberry as a color name in English was in 1776.[23] 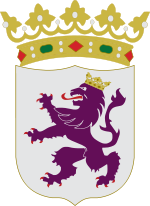 Coat of arms of the Kingdom of León.