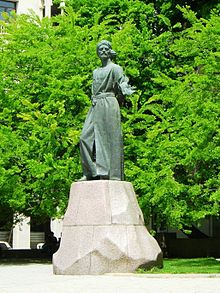 Nasimi statue in Baku, the capital of Azerbaijan

‘Alī ‘Imādu d-Dīn Nasīmī (Azerbaijani: Seyid Əli İmadəddin Nəsimi عمادالدین نسیمی, Persian: عمادالدین نسیمی), often known as Nesimi, (1369 Unknown) –1417 skinned alive in Aleppo) was a 14th-century Azerbaijani[citation needed][1][2][3] or Turkmen[4][5] Ḥurūfī poet. Known mostly by his pen name (or takhallus) of Nesîmî, he composed one divan in Azerbaijani,[6][7] one in Persian,[2][8] and a number of poems in Arabic.[9] He is considered one of the greatest Turkic mystical poets of the late 14th and early 15th centuries[9] and one of the most prominent early divan masters in Turkic literary history.[9]

Very little is known for certain about Nesîmî's life, including his real name. Most sources indicate that his name was İmâdüddîn[10][11], but it is also claimed that his name may have been Alî or Ömer.[12] It is also possible that he was descended from Muhammad, since he has sometimes been accorded the title of sayyid that is reserved for people claimed to be in Muhammad's line of descent.

Nesîmî's birthplace, like his real name, is wrapped in mystery: some claim that he was born in a province called Nesîm — hence the pen name — located either near Aleppo in modern-day Syria,[10] or near Baghdad in modern-day Iraq,[11] but no such province has been found to exist. There are also claims that he was born in Shamakhi-which is mostly likely because his brother is buried in Shamakhi, Azerbaijan.

According to the Encyclopædia of Islam,[8] 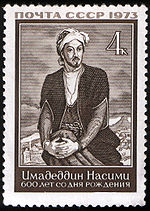 Stamp of the USSR devoted to Imadaddin Nasimi, 1973

From his poetry, it's evident that Nesîmî was an adherent of the Ḥurūfī movement, which was founded by Nesîmî's teacher Fażlullāh Astarābādī of Astarābād, who was condemned for heresy and executed in Alinja near Nakhchivan.[13] The center of Fażlullāh's influence was Baku and most of his followers came from Shirvan.[14]

Nesîmî become one of the most influential advocates of the Ḥurūfī doctrine and the movement's ideas were spread to a large extent through his poetry. While Fażlullāh believed that he himself was the manifestation of God, for Nesîmî, at the center of Creation there was God, who bestowed His Light on man. Through sacrifice and self perfection, man can become one with God.[15] Around 1417, (or possibly 1404[10][12]) as a direct result of his beliefs — which were considered blasphemous by contemporary religious authorities — Nesîmî was seized and, according to most accounts,[10][12] skinned alive in Aleppo.

A number of legends later grew up around Nesimi's execution, such as the story that he mocked his executioners with improvised verse and, after the execution, draped his flayed skin around his shoulders and departed.[10] A rare historical account of the event — the Tarih-i Heleb of Akhmad ibn Ibrahim al-Halabi — relates that the court, which was of the Maliki school of religious law, was unwilling to convict Nesîmî of apostasy, and that the order of execution instead came from the secular power of the emir of Aleppo, who was hoping to avoid open rebellion.[16]

Nesîmî's tomb in Aleppo remains an important place of pilgrimage to this day.

Nesîmî's collected poems, or dîvân, number about 300, and include ghazals, qasidas (“lyrics”), and rubâ'îs (“quatrains”) in Azerbaijani Turkic,[1][2][3] Persian, and Arabic. His Turkish Divan is considered his most important work,[9] contains 250–300 ghazals and more than 150 rubâ'îs. A large body of Bektashi and Alevi poetry is also attributed to Nesîmî, largely as a result of Hurûfî ideas' influence upon those two groups. Shah Ismail I, the founder of Safavid dynasty in Iran, who himself composed a divan in Azerbaijani Turkic under the pen name of Khatai,[17] praised Nesimi in his poems[18]

According to the Encyclopedia of Islam[8]:

One of Nesîmî's most famous poems is the gazel beginning with the following lines:

The poem serves as an excellent example of Nesîmî's poetic brand of Hurufism in its mystical form. There is a contrast made between the physical and the spiritual worlds, which are seen to be ultimately united in the human being. As such, the human being is seen to partake of the same spiritual essence as God: the phrase lâ-mekân (لامکان), or "the placeless", in the second line is a Sufi term used for God.[20] The same term, however, can be taken literally as meaning "without a place", and so Nesîmî is also using the term to refer to human physicality.[21] In his poem, Nesîmî stresses that understanding God is ultimately not possible in this world, though it is nonetheless the duty of human beings to strive for such an understanding. Moreover, as the poem's constant play with the ideas of the physical and the spiritual underlines, Nesîmî calls for this search for understanding to be carried out by people within their own selves. This couplet has been described in different pictures, movies, poems, and other pieces of arts.[22]

Some of Nesîmî's work is also more specifically Hurûfî in nature, as can be seen in the following quatrain from a long poem:

Seeing that moon I rejoiced
I made of my eyes a cup for its wine
I went on Hajj in pilgrim's garb
I called Fâ, Zâd, and Lâm by the name "Truth"

In the quatrain's last line, "Fâ", "Zâd", and "Lâm" are the names of the Arabic letters that together spell out the first name of the founder of Hurufism, Fazl-ullah. As such, Nesîmî is praising his shaykh, or spiritual teacher, and in fact comparing him to God, who is also given the name "Truth" (al-Haqq). Moreover, using the Perso-Arabic letters in the poem in such a manner is a direct manifestation of Hurûfî beliefs insofar as the group expounds a vast and complex letter symbolism in which each letter represents an aspect of the human character, and all the letters together can be seen to represent God.

Nesîmî is also considered a superb love poet, and his poems express the idea of love on both the personal and the spiritual plane. Many of his gazels, for instance, have a high level of emotiveness, as well as expressing a great mastery of language:

Should you want to lay your hair of musk atop the rose
And leave your lover destitute, oh please do not! 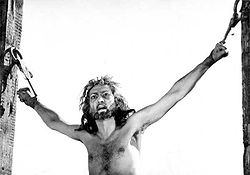 Nesîmî's work represents an important stage in the development of poetry not only in the Azerbaijani language vernacular, but also in the Ottoman Divan poetry tradition. After his death, Nesîmî's work continued to exercise a great influence on many Turkic language poets, and authors such as Fuzûlî (1483?–1556), Khata'i (1487–1524), and Pir Sultan Abdal (1480–1550) can be counted among his followers

Nesîmî is venerated in the modern Republic of Azerbaijan, and one of the districts of the capital city, Baku, bears his name. There is also a monument to him in the city, sculpted by T. Mamedov and I. Zeynalov. Furthermore, the Institute of Linguistics at the Academy of Sciences of Azerbaijan is named after him, and there was also a 1973 Azerbaijani film, Nasimi (the Azerbaijani language spelling of his name), made about him. The 600th anniversary of Nesîmî's birthday was celebrated worldwide in 1973 by the decision of UNESCO, and representatives from many countries took part in the celebrations held both in Azerbaijan and in Moscow, Russia.[citation needed]

In honor of Nasimi named: