The airport provides primary hub for the flag carrier, Pakistan International Airlines (PIA), Shaheen Air International, and Airblue as well as many other private airlines. The airport is equipped with aircraft engineering and overhauling facilities including the Ispahani Hangar for wide-body aircraft. 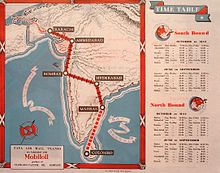 Tata Airlines, an early pioneer in air travel in South Asia, started as an air mail service from Karachi to Mumbai 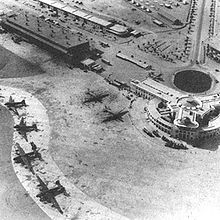 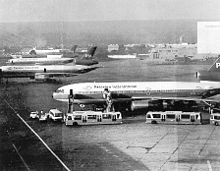 PIA aircraft at Karachi airport in the 1980s

During the 1940s there was a large black coloured hangar (also locally known as Kala Chapra) at the site of Karachi Airport, constructed for the British R101 Airship. Only three hangars were ever built in the world to dock and hangar the R101 airships. However, the R101 airship never arrived in Karachi (then part of the British Raj) as it crashed early in its journey in France. This hangar was so huge that aircraft often used it as a visual marker while attempting VFR landings at Karachi. Over the years, the hangar became known as the landmark of Karachi, until it was torn down by order of then-President Ayub Khan in the 1960s.

During World War II, Karachi Airport was a major transhipment base for United States Army Air Force units and equipment being used by Tenth Air Force in eastern India and Burma, as well as for Fourteenth Air Force in China. Several operational bomber and fighter units flew into Karachi for short organizational periods prior to their deployment. Air Technical Service Command had extensive facilities where aircraft were received, assembled and tested prior to being flown to their combat units at forward airfields. It also functioned as a major maintenance and supply depot for both air forces. In addition, Air Transport Command flew numerous cargo and passenger flights to the Middle East and to points within India and China.

The airport facilities were further expanded in the 1980s to Terminal 2 and Terminal 3 respectively. The present day infrastructure of Jinnah International Complex is a result of an expansion programme carried out in 1994. Today, the new Jinnah Terminal handles both domestic and international flights, whereas Terminal 2 is now dedicated to Hajj operations.[2]

In the past couple of years Karachi has seen a reversal in fortunes. The dwindling numbers of international airlines have stabilised and whilst there hasn't been a marked increase in the number of airlines flying in to Karachi, some have either increased the number of flights or resumed their old operations, either online or via codeshare service.

Economic factors may be partly responsible for the upswing in activity at the airport. As industrial growth in Karachi and the rest of Pakistan expands, some European and Asian carriers are mooting resumption of services to Jinnah International. 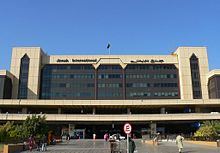 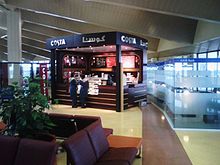 A coffee kiosk at the international departure lounge

The building is linked via connecting corridors to two satellites, each having a provision of eight passenger-loading bridges. The eastern satellite is devoted exclusively to handling international operations. The western satellite is used for domestic operations, as well as some international operations. This is achieved through a flexible arrangement of gates. The two satellites supplement the departure lounges of the terminal building and also provide shopping facilities, mobile recharging points, and snack counters.

The Jinnah Terminal was completed in 1992 at a cost of US $100 million - at the time the most expensive civil construction project in Pakistan. NESPAK (National Engineering Services Pakistan) and Airconsult (Frankfurt, Germany) were responsible for the architecture and planning of the terminal. Sogea Construction, a French company, was the contractor. Mukhtar Husain (NESPAK) was the Chief Architect for the new terminal.

In Karachi, the CIP Lounge can be used by all first and business class passengers on all outbound flights. Private banking clients of MCB Bank Ltd and United Bank Ltd can also use the lounge on complimentary basis under contract to CAA as part of their benefits package. Only passengers who have been pre-issued an airline card from the check-in desk can enter the lounge. Other passengers who wish to use the lounge may do so upon payment of charges of USD 6.00 (international) or PKR 100/- (domestic). The lounge features light savoury snacks and non-alcoholic beverages, satellite TV, audio entertainment, newspapers, magazines, telephones, fax facilities, wireless Internet, and mobile charging points. There are also two McDonald's kiosks located on-site at the airport. airblue has also introduced their own lounge in the international terminal of the airport.[4]

The airport is also where the majority of PIA's maintenance network is located, although some of its maintenance work also takes place at Benazir Bhutto International Airport, Rawalpindi. There are several hangars at the airport; the largest being the Ispahani Hangar (named after Mirza Ahmad Ispahani, the first chairman of PIA) that can accommodate two Boeing 747s and one narrow body airliner (e.g. Boeing 737) at one time. On 15 February 2006, the first major overhaul of a Boeing 777-200ER aircraft (known as "C" check) was done at Ispahani Hangar. Most of the PIA aircraft are checked and regulated at the aircraft hangars in Karachi. The PIA maintenance also check other airline aircraft in Karachi such as Philippine Airlines, Turkish Airlines, and Air Universal.

The airport has two runways measuring 3,200m and 3,400m in length respectively. Runways, 25R/07L and 25L/07R each have a width of 46 m (250 ft). The runways have capacity to handle 15 flights per hour and it accommodate simultaneous landing and take off. Runway 07L/25R is equipped with ILS to guide landing aircraft safely under very poor weather conditions and also allowing planes to land in low visibility conditions, such as fog.[8] The taxiway is able to handle 12 aircraft at any one moment while the parking area measures 266,000 sq meters and is able to accommodate 42 aircraft, 12 of which through air bridges linking them directly with the terminal building. In addition to this, there are remote parking bays for 30 aircraft.

The Ispahani Hangar is PIA's wide-body aircraft maintenance hangar at Jinnah International Airport. It has been named in honour of Mr. Mirza Ahmad Ispahani. Mirza Ahmad Ispahani was the first and longest serving chairman of Pakistan International Airlines from its inception in 1954 until 1962. The new jet hangar for wide body and narrow body aircraft with a supporting airframe overhaul shop was completed and commissioned in 1968.

Most of the PIA aircraft are checked and regulated at the aircraft hangars in Karachi. The PIA maintenance also check other airline aircraft in Karachi such as Philippine Airlines, Yemenia, and Turkish Airlines.

Jinnah Airport has one main terminal, divided into two concourses:[9] 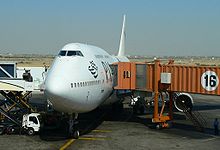 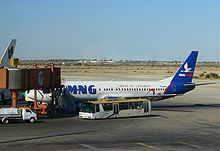 A leased MNG Airlines Boeing 737-200 aircraft being prepared for a Hajj flight, 2006 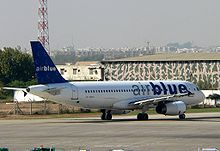 airblue Airbus A320-200 taxing out to the runway

Notes:
^1 : Iraqi Airways service on the sector BGW/BSR - KHI vv is routed via BAH. However they do not have fifth freedom traffic rights BAH - KHI vv.

A Saudi Arabian Airlines Boeing 747-412 during takeoff from Karachi