Where Quality Is Job Number 1

Where Quality Is Job Number 1 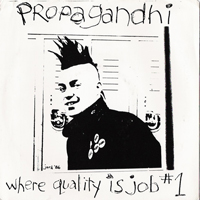 
"Where Quality is Job #1" is a double-7" EP by the band , released by Recess Records in 1994. It contains ten early demo and live recordings. The sound quality and packaging are consciously poor, featuring hand-written etched designs instead of labels as well as a confusing error and doodle-filled liner note sheet with reference to songs that did not appear on the EP while omitting songs that did.

*Rather than label the sides as A, B, C, and D, Propagandhi chose "F", "U", "C", and "K Off".
*The later compilation album, "Where Quantity is Job #1", is a reference to this early release.
*Despite having similar titles and artwork, only "Leg-Hold Trap," "Gov't Cartoons," Bent," and "Hidden Curriculum" were included on "Where Quantity is Job #1" as were the songs "White, Proud And Stupid" and "Fine Day" which were listed on the liner note insert sheet but did not appear on this EP.
*There is a five-second snippet of "Degrassi Jr. High Dropouts" at the beginning of Side "U." The song appears in its entirety on "Where Quantity is Job #1".
*"Greenest Eyes" is an early version and first part of the song "Showdown (G.E./P.)" on "".
*"Kill Bill Harcus" is an early version of the song "The Only "Good" Fascist is a Very "Dead" Fascist" on "".