Craig Alan Biggio (born December 14, 1965) is a former Major League Baseball second baseman, catcher, and outfielder. He played his entire 20-year baseball career with the Houston Astros (1988–2007). He ranks 21st all-time with 3,060 career hits, and is the ninth player in the 3000 hit club to get all his hits with the same team. He is currently the head varsity baseball coach for St. Thomas High School in Houston, Texas.

Craig Biggio graduated from Kings Park High School on Long Island, New York, where he excelled as a multi-sport varsity athlete. Most notably, after the 1983 season, Biggio was awarded the Hansen Award, which recognized him as being the best football player in Suffolk County.[1] However, Biggio's passion lay with baseball, such that he turned down football scholarships for the opportunity to play baseball for Seton Hall University.

An infielder in school, Biggio switched to catcher at Seton Hall University because his team needed one. Biggio was an All-American baseball player at Seton Hall, where he played with other future Major League Baseball stars Mo Vaughn and John Valentin. Biggio, Vaughn and Valentin, along with Marteese Robinson, were featured in the book The Hit Men and the Kid Who Batted Ninth by David Siroty which chronicled their rise from college teammates to the major leagues. Biggio was drafted by the Houston Astros in the first round (22nd overall) in 1987.

Biggio was called up as a catcher midway through the 1988 season, having batted .344 in his minor league career. In 1989, his first full season, Biggio became the Astros' starting catcher. He won the Silver Slugger award in 1989. Biggio was a very speedy runner, and an adept base stealer. Astros' management, in an attempt to keep the rigors of catching from sapping Biggio's speed, tried him in the outfield part-time in 1990, as he had played 18 games there in the minors. Yogi Berra, when asked about Biggio being short for a catcher, said "Short catchers are better, because they don't have to stand up as far."[citation needed]

The Astros finally convinced Biggio to convert to second base in spring training 1992, even though Biggio had made the National League All-Star team as a catcher in 1991. Biggio made the All-Star team for the second time in 1992, becoming the first player in the history of baseball to be an All-Star at both catcher and second base. It is remarkably rare for a major league catcher to make a successful transition to middle infielder. If a catcher changes positions, it is usually to first base, or occasionally to outfield or third base.

Biggio became known as a reliable, hustling, consistent leadoff hitter, with unusual power for a second baseman. He holds the National League record for most home runs to lead off a game, with fifty. His statistics reflect this, having consistently good marks in hitting, on-base percentage, hit-by-pitch, runs, stolen bases, and doubles throughout his career.

Biggio played 1,800 games without a trip to the disabled list until August 1, 2000, when he suffered a season-ending knee injury. In the play in which Biggio was injured, the Florida Marlins' Preston Wilson (who would later become Biggio's teammate) slid into second base, trying to stop a double play, and hit Biggio's planted left leg, tearing the ACL and MCL in Biggio's knee. Biggio rebounded with a good season in 2001, but had a lackluster performance in 2002, with only a .253 average, his lowest since entering the league.

However, he improved slightly for the 2003 season, averaging .264 with 166 hits despite being asked by management to move to center field after the signing of free agent All-Star second baseman Jeff Kent. In 2004, he put up numbers more typical for his career, batting .281 with 178 hits, including a career high 24 homers. Biggio moved to yet another new position, left field, midway through the 2004 season to accommodate Carlos Beltrán, who was acquired in a trade to help bolster the Astros' struggling offense.

For the 2005 season, Biggio moved back to second base after Kent left for the Dodgers. Biggio set a new career high by hitting 26 home runs and during the season hit his 1000th RBI becoming the second Astro with 1000 RBI for Houston (the first being Jeff Bagwell). Biggio played in the World Series in 2005 for the first time in his eighteen year career. On May 23, 2006, Biggio became the 23rd player in MLB history with 10,000 at-bats. 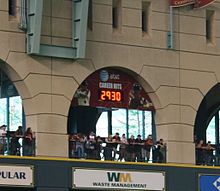 Biggio's hit counter, prior to the start of the 2007 season.

On June 28, 2007, Biggio became the 27th player in the history of Major League Baseball to join the 3000 hit club, with a single against Colorado Rockies pitcher Aaron Cook, even though he was tagged out on the play as he tried to stretch it into a double to draw a throw and allow a run to score. The game action paused while Biggio shared the moment with his wife and children. Longtime friend and former teammate Jeff Bagwell emerged from the Astros clubhouse to congratulate him. Biggio became the first player in Astros history to accumulate 3,000 hits. It was Biggio's third hit of the game, and he went on to accumulate two more later in the game, one in the ninth inning and one in the eleventh inning. Interestingly enough, Biggio's 3,000 hit came on the same day that Frank Thomas hit his milestone 500th career home run, both marks which are considered to guarantee one's induction into the Hall of Fame.

With 668 doubles, he ended his career in 5th place on the all-time list. Biggio also holds the record for the most doubles by a right-handed hitter. Biggio is the only player in the history of baseball with 3000 hits, 600 doubles, 400 stolen bases, and 250 home runs. Biggio ranks 20th on the all-time hits list, though of those 20 players he ranks 19th in career batting average.

Biggio fell nine home runs short of joining the career 300-300 club (300 homers and 300 stolen bases). He would have become only the seventh player to achieve the feat. Incidentally, this also caused him to fall short of the 3,000 hits, 300 homers and 300 stolen bases mark; he would have been only the second player in history to reach that club, the other being Willie Mays. 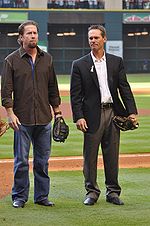 On July 24, 2007, Biggio announced his retirement, effective at the end of the season (his 20th season with the club, a franchise record). Hours later, with the Astros locked in a 3–3 tie with the Los Angeles Dodgers, Biggio hit a grand slam in the 6th inning. The Astros went on to win the game 7–4.

In the penultimate game of his career, Biggio started as a catcher and caught 2 innings for the Astros. He also hit a double in his first at-bat of the game.[2]

A sellout, record-breaking crowd packed Minute Maid Park on September 30, 2007, to witness Biggio's final game. He recorded his final career hit, a double in the first inning, and scored his final career run that same inning. In his final career at-bat, he grounded the ball to third baseman Chipper Jones, who threw out the hustling Biggio by half a step. He left the field to a standing ovation from the fans, and when he was replaced defensively in the top of the 8th inning he shook hands with umpires and teammates and left to another standing ovation as he waved to the fans. The Astros won the game 3-0.

Over his career, Biggio gained a reputation for being hit by pitches. Some have even gone so far as to proclaim him the "king of hit batsmen."[3] On June 29, 2005, Biggio broke the modern-era career hit-by-pitch record, previously held by Don Baylor with 267. He is second to only Hughie Jennings on the all-time list with 287. Despite being hit by a record number of pitches, Biggio never charged the mound,[4] and had no serious injuries as a result of being hit by a pitch.

In his final season, however, Biggio was only hit three times. He was hit fewer times total between 2006 and 2007 (9 times in 2006, total of 12) than he was in 10 of his previous 11 individual seasons. In August 2007, the satirical online newspaper The Onion referenced this in the article, "Craig Biggio Blames Media Pressure For Stalling At 285 Hit-By-Pitches".[5] Biggio sent an arm guard to the National Baseball Hall of Fame in recognition of his high hit-by-pitch total.

Craig Biggio was honored alongside the retired numbers of the Houston Astros in 2008. 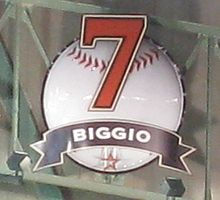 On May 23, 2008, during a pre-game ceremony in which Biggio received an award for MLB.com's This Year in Baseball 2007 Moment of the Year award for his 3,000th hit on June 28, the Astros announced that they would retire Craig Biggio's jersey.[6] The Houston Astros retired his No. 7 jersey on August 17, 2008, prior to the start of a game versus the Arizona Diamondbacks. Biggio was the ninth player in Astros history to have his number retired; most recently, Biggio's longtime teammate Jeff Bagwell had his No. 5 retired in 2007.

Work in the community

Biggio has received awards from various organizations, including the Hutch Award (2005) and being named one of Sporting News' Good Guys (2004). The Hutch Award is given to a player that shows competitiveness and never gives up. Part of the reason Biggio was given the award was for his multiple position changes, but also because of his work in the community and inspiring other teammates to participate as well. He also received the Roberto Clemente Award in 2007. The Roberto Clemente Award "recognizes the player who best exemplifies the game of baseball, sportsmanship, community involvement and the individual's contribution to his team."[7]

Biggio has been a supporter and lead spokesperson for the Sunshine Kids Foundation for over a decade and almost the entirety of his playing career. The organization supports children fighting cancer with exciting activities for themselves and their families. Biggio helps the organization by raising awareness of the organization by wearing a small yellow sun on his cap for interviews, batting practice, and spring training games and by holding a celebrity golf tournament in Houston each spring. Biggio hosts an annual party at Minute Maid Park for about 100 Sunshine Kids to play baseball with Biggio and some of his teammates.

With the 2006 annual golf tournament, Biggio has raised over $2 million for the organization. During 2007 spring training, MLB informed Biggio that he would no longer be allowed to wear the small yellow sun on his cap during interviews, photo shoots, or spring training. Biggio had worn the Sunshine Kids pin for over a decade. This edict was big news in Houston, and Houstonians, long known for their charitable nature and unconditional love of Biggio, reacted very negatively to MLB. After the public uproar, MLB relented and Biggio was allowed to wear the Sunshine Kids pin as he had done since becoming a spokesperson.[8]

Biggio and his wife, Patty (Egan), have three children: son Conor Joseph (b. January 7, 1993); son Cavan Thomas (b. April 11, 1995); and daughter Quinn Patricia (b. September 27, 1999). They currently live in Houston, Texas, where Craig is head varsity baseball coach at St. Thomas High School.[9] Biggio coached St. Thomas to back-to-back Texas Class 5A state baseball titles in 2010 and 2011. Both of Biggios' sons are involved in the baseball team. Cavan hit a home run in the teams 2011 championship game, while older brother Conor provided the winning offense in S. Thomas' semi-final victory.[10] When asked by the Houston Chronicle about the success, the elder Biggio replied

I don't get too caught up in that...it's not about me its about these kids, and win or lose we're trying to turn these kids into men. Thats the thing thats most important to me.

Biggio and his family had a home in Spring Lake, New Jersey that they named "Home Plate".[11]

Biggio, a fan of the musical group U2, often had their song "Mysterious Ways" played as he stepped up to the batter's box.