Church of the Province of South East Asia

Church of the Province of South East Asia

The Church of the Province of South East Asia, a member church of the Anglican Communion, was created in 1996, comprising the four dioceses of Kuching, Sabah, Singapore and West Malaysia. The current Metropolitan Archbishop is the Bishop of Singapore, the Most Reverend Dr John Chew Hiang Chea.

Anglicanism was first introduced with the establishment of the British East India Company's settlement of Penang Island in 1786. George Caunter, a local magistrate, was appointed as a Lay Clerk/Acting Chaplain in 1799 under the jurisdiction of the See of Calcutta. In 1819, the first Anglican church building, the Church of St. George the Martyr, was consecrated by the Bishop of Calcutta, Thomas Fanshawe Middleton.

In 1826, the Mission Chapel of the London Missionary Society (LMS) started services in Singapore and the first church building in Singapore was built in 1837. In 1842, a missionary of the LMS started the first girls school in Singapore, now known as St. Margaret's School. The work in Borneo started in 1848 when a group of missionaries led by Francis Thomas McDougall was invited by James Brooke, the Rajah of Sarawak. In 1849, a wooden church was built in Kuching. In 1851, this church was consecrated by Daniel Wilson, Bishop of Calcutta in honour of St. Thomas the Apostle.

Letters patent was issued in 1855 to establish the Bishopric of Labuan and McDougall was appointed the first Bishop of Labuan. McDougall was also appointed the Bishop of Sarawak by the Rajah of Sarawak due to the political conventions of the day ruled that no Anglican Diocese might be created outside the limits of the British Empire, and Sarawak was then technically an independent kingdom. This practice prevailed until the Sarawak became a Crown Colony in 1946.

In 1867, The East India Company transferred Penang to the British Crown and with that ended the chaplaincy of the Madras Presidency in Penang. The Anglican churches in Penang, Malacca and Singapore were organised into the Church in the Straits Settlement while remaining under the jurisdiction of the See of Calcutta.

The Church in the Straits Settlement was separated from the See of Calcutta by an Act of Parliament in 1869 and placed under the episcopal care of the Bishop of Labuan as the United Diocese of Singapore, Labuan and Sarawak. In 1909, the United Diocese was further divided into the Diocese of Singapore, the Diocese of Labuan and the Bishopric of Sarawak. The 3 separate Dioceses developed independently from then onwards until the creation of the Province.

The period between the division of the United Diocese and the outbreak of the Second World War in the Pacific, missionary work continued with increasing ordination of local clergy and planting of churches all throughout the Malaya and Singapore.

This development highlighted the urgent need for training local leaders for this developing part of the Anglican Church and eventually led to the establishment of Singapore's Trinity Theological College in 1951.

James Brooke, Rajah of Sarawak brought in missionaries in 1848.

Work in British Borneo after the division of the United Diocese until the outbreak of the Second World War followed a similar pattern to the work in Malaya and Singapore. Anglican missionaries were however more successful than their counterparts in Malaya and Singapore in evangelising the indigenous peoples.

In 1996, autocephaly was attained when the Province of South East Asia consisting of the Dioceses of West Malaysia, Singapore, Kuching and Sabah was established by the Archbishop of Canterbury. The Most Reverend Dr Moses Tay, Bishop of Singapore, was consecrated as the first Metropolitan Archbishop of the Province the same year. The Province celebrated its 10th Anniversary in February 2006.

Today, there are at least 98,000 Anglicans out of an estimated population of 23.8 million.

The polity of the Church of the Province of South East Asia is Episcopalian church governance, which is the same as other Anglican churches. The church maintains a system of geographical parishes organized into dioceses. The Province is divided into four dioceses. Furthermore, the Dioceses of Kuching, West Malaysia and Singapore are further subdivided into archdeaconries and deaneries respectively.

The Church of the Province of South East Asia embraces three orders of ministry: deacon, priest, and bishop. A local variant of the Book of Common Prayer is used. 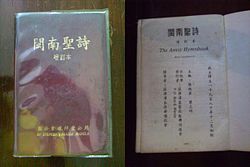 The center of the Church of the Province of South East Asia's teaching is the life and resurrection of Jesus Christ. The basic teachings of the church, or catechism, includes:

The threefold sources of authority in Anglicanism are scripture, tradition, and reason. These three sources uphold and critique each other in a dynamic way. This balance of scripture, tradition and reason is traced to the work of Richard Hooker, a sixteenth century apologist. In Hooker's model, scripture is the primary means of arriving at doctrine and things stated plainly in scripture are accepted as true. Issues that are ambiguous are determined by tradition, which is checked by reason.[4]

The dioceses of the Church of the Province of South East Asia participate in the ecumenical World Council of Churches via their respective national church councils: