Sharm el-Sheikh
Not to be confused with the settlement Sharm in Fujairah, United Arab Emirates.

Sharm el-Sheikh (Arabic: شرم الشيخ‎, Sharm al-Shaykh, pronounced [ˈʃɑɾˤm eʃˈʃeːx]) is a city situated on the southern tip of the Sinai Peninsula, in South Sinai Governorate, Egypt, on the coastal strip along the Red Sea. Its population is approximately 35,000 (2008). Sharm el-Sheikh is the administrative hub of Egypt's South Sinai Governorate which includes the smaller coastal towns of Dahab and Nuweiba as well as the mountainous interior, Saint Catherine's Monastery and Mount Sinai.

Sharm el-Sheikh is sometimes called the "City of Peace", referring to the large number of international peace conferences that have been held there. It was known as Şarm-üş Şeyh (Sharm ush-Sheikh, "bay of the Sheikh" in Arabic) during Ottoman rule and was known as Ofira during Israeli occupation between 1967 and 1982.[citation needed] Among Egyptians, the name of the city is commonly shortened to "Sharm" ([ʃɑɾˤm]). 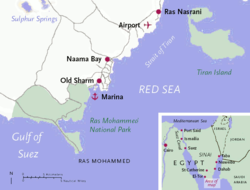 Sharm el-Sheikh is located on the Egyptian Red Sea coast, at the southern tip of the Sinai Peninsula.

Sharm el-Sheikh is on a promontory overlooking the Straits of Tiran at the mouth of the Gulf of Aqaba. Its strategic importance led to its transformation from a fishing village into a major port and naval base for the Egyptian Navy. It was captured by Israel during the Suez Crisis of 1956 and restored to Egypt in 1957. A United Nations peacekeeping force was subsequently stationed there until the 1967 Six-Day War when it was recaptured by Israel. Sharm el-Sheikh remained under Israeli control until the Sinai peninsula was restored again to Egypt in 1982 after the Israel-Egypt Peace Treaty of 1979.[citation needed]

A street in Naama Bay.

Before 1967 Sharm el-Sheikh was little more than an occasional base of operations for local fishermen; the nearest permanent settlement was in Nabk, north of Ras el-Nasrani ("The Tiran Straits"). Commercial development of the area began during the Israeli presence in the area. The Israelis built the town of Ofira, overlooking Sharm el-Maya Bay and the Nesima area, and opened the first tourist-oriented establishments in the area 6 km north at Naama Bay. These included a marina hotel on the southern side of the bay, a nature field school on the northern side, diving clubs, a now well-known promenade, and the Naama Bay Hotel.[citation needed]

After Sinai was restored to Egypt in 1982 the Egyptian government embarked on an initiative to encourage continued development of the city. Foreign investors – some of whom had discovered the potential of the locality during the Israeli occupation – contributed to a spate of building projects. Environmental zoning laws currently limit the height of buildings in Sharm el-Sheikh so as to avoid obscuring the natural beauty of the surroundings.

In 2005, the resort was hit by the Sharm el-Sheikh terrorist attacks, which were perpetrated by an extremist Islamist organisation, and aimed at Egypt's tourist industry. Eighty-eight people were killed, the majority of them Egyptians, and over 200 were wounded by the attack, making it the deadliest terrorist action in the country's history (exceeding the Luxor massacre of 1997).[1]

The city has played host to a number of important Middle Eastern peace conferences, including the 4 September 1999 agreement to restore Palestinian self-rule over the Gaza Strip. A second summit was held at Sharm on 17 October 2000 following the outbreak of the second Palestinian intifada, but it failed to end the violence. A summit was held in the city on 3 August 2005 on developments in the Arab world such as the situation in the Arab-Israeli conflict. Again in 2007, an important ministerial meeting took place in Sharm, where dignitaries discussed Iraq reconstruction[2] . The World Economic Forum on the Middle East was also hosted by Sharm el-Sheikh in 2006[3] and 2008.[4]

Amidst the 2011 Egyptian protests, President Hosni Mubarak reportedly went to Sharm el-Sheikh and resigned there on 11 February 2011.[5] 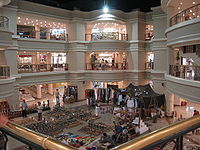 Sharm el-Sheikh was formerly a port, but commercial shipping has been greatly reduced as the result of strict environmental laws introduced in the 1990s.[citation needed]Until 1982, there was only a military port in Sharm el-Sheikh, on the northern part of Marsa Bareka. The civilian port development started in the mid 1980s when the Sharem-al-Maya bay became the city's main yacht and service port.[citation needed]

Sharm el-Sheikh's major industry is foreign and domestic tourism, owing to its dramatic landscape, year-round dry and temperate climate and long stretches of natural beaches. Its waters are clear and calm for most of the year[citation needed] and have become popular for various watersports, particularly recreational scuba diving and snorkeling. There is great scope for scientific tourism with diversity in marine life species; 250 different coral reefs and 1000 species of fish.[citation needed]

These natural resources, together with its proximity to European tourism markets, have stimulated the rapid growth of tourism that the region is currently experiencing. The total number of resorts increased from three in 1982 to ninety one in 2000. Guest nights also increased in that period of time from sixteen thousand to 5.1 million. Companies which have been attracted to invest in this city include Hyatt Regency, Accor, Marriott, Le Méridien, Four Seasons, Ritz-Carlton, with categories of three to five stars. In 2007 the area saw the opening of its first aqua park hotel resort. The four star Aqua Blu Sharm Resort was built on the Ras Om El Seid, with an area of 133,905 square metres (1,441,340 sq ft).

Sharm is also the home of a congress center, located along peace road, where many international political and economic meetings have been held, including peace conferences, ministerial meetings, world bank meetings, Arab League.[citation needed] The Maritim Sharm el-Sheikh International Congress Centre can host events and congresses for up to 4,700 participants.

The nightlife of Sharm El-Sheikh is modern and developed. The colorful handicraft stands of the local Bedouin culture are a popular attraction.[citation needed] Ras Mohammed, at the southern-most tip of the peninsula, has been designated a national park, serving to protect the area's wildlife as well as its natural landscape, shoreline and coral reef. A number of international hotels and noted restaurants are clustered around the centre of Sharm, known as Naama Bay, with golf courses and other leisure facilities further up the coast.

SPACE SHARM EL SHEIKH is located at the top of Naama Bay, downtown and can accommodate 9,000 to 10,000 people spread over three rooms designed completely different, being two of them outdoor and an indoor lounge area. All this is spread over an area of 5200 m2 with an impressive modern architecture and elegant design. -The Terrace framed within an organic style and decorated with natural elements including a 12 meter pool with a waterfall, a true feeling of being in an oasis. -Lounge, the inner room where you can breathe a genuine luxury all year round -The Discoteca, a modern, sophisticated design combined with the latest and most spectacular LED lighting technology. - Space has a spectacular view from the Red Sea and the mountains to enjoy Egypt in its purest form with the best music from Ibiza. The sound system has been developed especially for this club with Funktion one’s supreme quality.

Outings to places such as Cairo and the Great Pyramids require a crossing of a continental border (crossing from Asia to Africa) which requires a travel visa that must be acquired from Sharm el Sheik airport.

Sharm's marina has been redeveloped for private yachts and sailboats, with a passenger terminal for cruise ships and scheduled ferry service to Hurghada and Aqaba. Sharm el-Sheikh International Airport in addition to scheduled flights to Cairo, Hurghada, Luxor, Alexandria.

Sharm el-Sheikh has also become a favourite spot for scuba divers from around the world.[citation needed] Being situated near the Red Sea, it provides some of the most stunning underwater scenery and warm water making this an ideal place to dive. Visitors to Sharm el-Sheikh can experience a variety of water and activities. Beach seekers find many activities such as diving, snorkelling, windsurfing, kitesurfing, para-sailing, boating, and canoeing.

Ras Mohammed is the national park of South Sinai, located on the tip of the Sinai Peninsula. Along with Nabq, it has famous dive sites in the Red Sea, with 800-metre (2,600 ft) deep reef walls, pounding current and coral gardens.

The Sharm el-Sheikh Hyperbaric Medical Center was founded in 1993 with a grant from USAID by the Egyptian Ministry of Tourism, represented by Dr. Adel Taher to assist with diving related illnesses and complete the area's reputation as a full-service dive destination.

On 1 December 2010 four tourists - three Russians, and a Ukrainian - were attacked and injured by an oceanic whitetip shark or sharks in three separate incidents off Sharm-el-Sheikh. One victim lost a leg, and another an arm. The Egyptian authorities subsequently claimed that the shark responsible for the attacks had been captured alive, but the identification was disputed by the diving industry based on eyewitness and photographic evidence.[9][10] Four days later, on 5 December an elderly German woman was attacked and killed by a shark whilst snorkelling at the resort.[11]