Nationalities and regions of Spain

Nationalities and regions of Spain

While the Constitution was being drafted, the term made reference to the three specific regions that had approved or were about to approve a Statute of Autonomy during the Second Spanish Republic—Catalonia, the Basque country and Galicia[2][3][4]—which were to be granted self-government through a fast and simplified process.[2] Because of this, there were mass demonstrations in Andalusia, in southern Spain, for its recognition as a nationality as well, and its right to self-government. In the final version of the constitution, all nationalities and regions of Spain were to be devolved autonomy, albeit asymmetrically,[3][4] under very specific stipulations, and if their provinces requested so.[2] The three historical nationalities acceded to autonomy almost automatically or fast-track,[3] whereas the rest of the regions, Andalusia included, received autonomy in compliance with the 152nd and 153rd articles of the Constitution.

"The Constitution is based on the indissoluble unity of the Spanish Nation, the common and indivisible homeland of all Spaniards; it recognizes and guarantees the right to self-government of the nationalities and regions of which it is composed and the solidarity among them all." (emphasis added)

The term nationality was a consensus solution trying to conciliate the centralist and old-regime positions, who consider these regions part of the indivisible unity of Spain, with the nationalists from the Basque Country, Catalonia etc., who consider those territories as nations (see also nationality vs. nation).

Actually, only the Catalan statute was active before the Spanish Civil War. Andalusia statute of autonomy was drawn and submitted by Blas Infante at the same time[5], then approved by parliament in June 1936, to be voted in referendum in September 1936. However the start of the Civil War in July and the assassination of Infante by Franco's rebels in August of the same year put an end to the autonomic project for Andalusia. The Basque statute was approved during the war and was effective only on the limited part of the region under the control of the Basque Government. 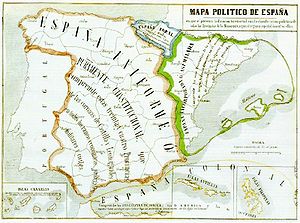 Anachronous map showing the different regions where traditional consuetudinary law in Spain ("fueros") used to be applied before the 18th century. Many of the demands for present-day "historical nationality" claims have been based in this former status

The current Spanish Constitution—as the keystone of the troubled yet successful Spanish transition to democracy—is a compromise of diverse and often opposing views.[4] As such, it has been open to interpretation, especially in the dispositions regarding the territorial organization of the country. While it has been argued that the term nationality made reference to the three historic ones, these are not explicitly mentioned in the constitution.[4] Moreover, the constitution established that the internal organization of the states was built upon the "municipalities, the provinces, and the autonomous communities that may be constituted",[6] thus being ambiguous as to which entity was considered the building block of the administrative organization. Arguably, the so-called autonomous communities, as political bodies, where meant for the historic nationalities while the rest of the regions could have taken on another organizational structure, including a centralized one. Nonetheless, after the Andalusian Statute of Autonomy was passed, all the regions opted for the Autonomous Community decentralized model. This opened the phase dubbed in Spanish with the expression café para todos or coffee for all, which means that all regions would be served the same—that is, all regions could accede to self-government in the same degree— regardless of any given nationality or region status.[7]

In practical terms, the extension of the descentralized model, though still retaining an asymmetrical form,[3] opened a source of complaint in the nationalities, especially in Catalonia. Both Andalusia and Galicia are among the biggest net beneficiaries of inter-community state-sponsored economic funding while the Basque Country and Navarra secured its own finances apart from the state-wide ones based on their historical charter system. Thus, Catalan parties have been the most vocal in their dissatisfaction with the generalization of this autonomic model, especially in the financial chapter (only the two chartered communities enjoy financial autonomy, while the rest are common-regime communities, which administer a share of the taxes they collect for the central government). In their pursue for a more asymmetric, extended and customized devolution of power, the Generalitat of Catalonia has tried to distinguish itself from common-regime autonomous communities searching for more regional empowerment and aiming to retain and administer the taxes collected locally, as it is currently done in the chartered communities (Navarre, and the Basque Country).[8] Moreover, the extended use of the term nationality aside of the three historic ones, has led to political movements in the latter—and in Andalusia as well—to move a step higher in being recognized as nations within the Spanish State.[3] In the new Catalan Statute of Autonomy, the term was introduced in the draft by the Catalan Parliament, but later removed in the final version approved by the Spanish Parliament.

On the face of a Constitution which remains open and vague about these topics, practice has become that the rest of common regime autonomous communities typically follow wherever Catalonia leads, thus vanishing whatever practical distinction between nationality and region, (the distinction factor being the degree of devolution of power) regardless of how the autonomous community identifies itself. Accordingly, in the 2006-2007 period a number of autonomies, including some originally slow-track ones (Andalusia, the Valencian Community, Balearics) also self-styled themselves as nationalities at the time of amending their respective statutes of autonomy, and this list is likely to grow in future amendments of other statutes of autonomy.

The current system established by the Spanish Constitution sets what some observers have defined as a trap for governments without an absolute majority in the Cortes Generales, since, to stay in control of the whole country, those will need the votes of regional nationalist parties[9] whose agendas are typically at odds with the Spanish national one.

Similarly, on the face of the extra bureaucracy imposed by the regional governments and mounting regional demands asking for additional funds, it has been argued by media such as the Financial Times that "café para todos is a stimulating brew no one wants to forgo. When the waiter comes, however, no one wants to pay the bill."[9]

As of 2007, the autonomous communities which are defined in their statutes of autonomy as nationalities,[10] therefore legally recognized as such are: Andalusia (1981 and 2006 statutes), Aragon (1996), Balearic Islands (1983 and 2007), Canary Islands (1996), Catalonia (1979 and 2006), Valencia (1982 and 2006), Galicia (1981) and Basque Country (1979). The rest chose diverse names to identify themselves such as regions or having historical regional identity (Murcia, Extremadura, Castile-La Mancha), historical communities (Asturias, Cantabria, Castile and León), having historical identity (La Rioja) and as a chartered community (Navarre). The Community of Madrid, on the other hand, was constituted as an autonomous community in the nation's interest by a prerogative of the Cortes Generales despite being part of the historical region of Castile-La Mancha.[11]