Kang Kek Iew or Kaing Kek Iev, also romanized as Kaing Guek Eav (Khmer: កាំង ហ្គេកអ៊ាវ), nom de guerre Comrade Duch or Deuch (មិត្តឌុច); or Hang Pin, (born 17 November 1942)[1] is a former leader in the Khmer Rouge communist movement, which ruled Democratic Kampuchea from 1975 to 1979. He is best known for heading the Khmer Rouge special branch and running the infamous Tuol Sleng (S-21) prison camp in Phnom Penh. The first Khmer Rouge leader to be tried by the Extraordinary Chambers in the Courts of Cambodia for the crimes of the regime,[2] he was convicted of crimes against humanity, murder, and torture for his role during the Khmer Rouge rule of Cambodia and sentenced to 35 years' imprisonment. 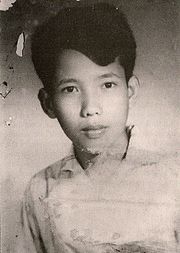 Kang Kek Iew at the age of about 17

Kang Kek Iew was born in Choyaot village, Kampong Chen subdistrict, Kampong Thom Province,[3] and is of Chinese-Khmer ancestry.[4][5] A star pupil in his school, he passed his Brevet d'Etudes Secondaire de Première in 1961 at the age of nineteen. He finished the first half of his Baccalaureate in 1962 at the Lycée Suravarman II in the town of Siem Reap. The same year he was offered a place in the prestigious Lycée Sisowath in Phnom Penh where he completed his Baccalaureate in mathematics, scoring second in the entire country.[6][page needed]

Induction into the Khmer Rouge

In 1964, Kek Iew began studying for his teaching certificate in Mathematics, a subject he loved, at the Institut de Pédagogie.[7] The Institute was a cradle of activism under the directorship of Son Sen who was later to emerge as the Defence Minister of the Khmer Rouge and Duch's immediate superior.

On August 28, 1966, Kek Iew got his teaching certificate and was posted to a lycée in Skoun, a small town in Kampong Cham Province. He was a good teacher, remembered as earnest and committed by his pupils.[6][page needed] He joined the Communist Party of Kampuchea in 1967. Following the arrest of three of his students, he fled to the Khmer Rouge base in Chamkar Leu District where he was accepted as a full member of the Communist Party of Kampuchea.

A few months later, he was arrested and tortured at the Prey Sar prison[6][page needed] by Norodom Sihanouk's police for engaging in communist activities.[7] He was held without trial for the next two years. In 1970, when he was released following the amnesty granted to political prisoners by Lon Nol, he joined the Khmer Rouge rebels in the Cardamom Mountains bordering Thailand.

Communist groups in France's former colonies in Indochina borrowed the French World War II expression 'maquis' when referring to their resistance movements in the jungles.[8]

In the zone under the control of the Khmer Rouge, Kek Iew took on his nom de guerre Comrade Duch (IPA:[dojc]) and became a prison commandant. He was appointed the head of Special Security by his immediate superior Vorn Vet. In the forests of Amleang, Thpong District, Duch set up his first prison, code-named 'M-13'. Two years later, he also established a second prison 'M-99' in nearby Aoral District.

Assisted by his two deputies, Comrade Chan and Comrade Pon, Duch began perfecting his interrogation techniques and the purging of perceived enemies from the Khmer Rouge ranks. Prisoners at these camps, mostly from the ranks of the Khmer Rouge, were routinely starved and tortured to extract real and made-up confessions. Few prisoners left the camps alive.

While in the maquis, Duch married Chhim Sophal, aka Rom, a dressmaker from a nearby village.

Leading the Santebal and Tuol Sleng

After the Khmer Rouge victory in April 1975 Duch and his men set up prisons throughout the capital including the infamous Tuol Sleng prison. Duch's request for a transfer in May 1975[9] to the Industrial Sector of government was denied.[7] The Tuol Sleng prison camp was initially headed by In Lon aka Comrade Nath with Duch acting as deputy.[6][page needed] Subsequently, In Lon was transferred and Duch promoted to be the Director.[10] By May 1976 all the prisons in Phnom Penh were consolidated and relocated to Tuol Sleng. Prisons like Tuol Sleng were created to cleanse the ranks of the Khmer Rouge of suspected enemies of the revolution.

Duch ordered the execution of prisoners after their interrogation was completed. For example, on a list containing the names of 17 prisoners (eight teenagers and nine children), he wrote the order “Smash them to pieces.” On a longer list of detainees, his annotation reads “smash: 115; keep: 44 persons.” The text below this annotation reads “Comrade Duch proposed to Angkar; Angkar agreed.” On a list of 20 female detainees, Duch wrote annotations for each of them, ordering: “take away for execution,” “keep for interrogation” or “medical experiment". At least 100 detainees died after having their blood drawn for transfusions for wounded soldiers. Surgical operations were also performed on detainees in order to train medical staff.[11]

Duch impressed his superiors with his work and was appointed the head of Democratic Kampuchea's dreaded "special branch" – the Santebal.

As the party purges increased towards the end of the Democratic Kampuchea period, more and more people were brought to Duch, including many former colleagues including his predecessor at Tuol Sleng, In Lon. Throughout this period Duch built up a large archive of prison records, mug shots and extracted "confessions".

On 7 January 1979, Duch was amongst the last Khmer Rouge cadres to flee Phnom Penh after it fell to the Vietnamese army. Though he was unable to destroy much of the prison's extensive documents, he saw to the execution of several surviving prisoners before he fled the city.

Duch reached the border with Thailand in May 1979. Details of his whereabouts at this time were sketchy. It is believed that he went to the forests of Samlaut where he was reunited with his family. Here Duch was demoted by Brother Number Two, Nuon Chea, for having failed to destroy the documents at Tuol Sleng. At the border, he learned to speak Thai and taught himself English. He later taught English and mathematics at a refugee camp in Borai just inside Thailand.[6][page needed]

In June 1986, Duch was sent to China to teach as a Khmer language expert at Beijing's Foreign Language Institute. He returned to the Thai-Cambodian border a year later and changed his name to Hang Pin. He worked as a senior bureaucrat just inside the Cambodian border at Pol Pot's secretariat at Camp 505. Shortly after the Paris agreement in October 1991, he moved with his family to a small isolated village called Phkoam close to the Thai border where he bought some land and began teaching in the local school. He was known as a good teacher, but one with a fiery temper.[6][page needed]

In 1995, following an attack on his home that killed his wife, Duch sold all his possessions, secured a transfer to Svay Chek College, and moved there with his children. Shortly after his wife's murder, Duch began attending the prayer meetings of the Golden West Cambodian Christian Church held in Battambang by Christopher LaPel, an evangelical Khmer-American. Duch was baptized by LaPel and eventually became a lay pastor.[6][page needed] LaPel was later to observe that although he did not know Duch's real identify at the time, there were clues. For example, before his conversion, Duch had said to Lapel that he had done a lot of bad things in his life. Later, Duch was to say, "I don’t know if my brothers and sisters can forgive the sins I've committed against the people".[12]

Close to his identity being discovered, Duch accepted a transfer to Samlaut as Director of Education. When fighting broke out in 1996 following the split of the Khmer Rouge and the coup to oust Prince Rannaridh in 1997, he fled with his family to the Ban Ma Muang camp just inside Thailand. At the camp, he worked for the American Refugee Committee as the Community Health Supervisor. In late 1998, he returned to Cambodia when fighting subsided. He settled in the village of Andao Hep in Rattanak Mondul and worked closely with World Vision International, the Christian relief agency.

The photojournalist Nic Dunlop tracked down Duch to Samlaut. In 1999, Nate Thayer, who had previously interviewed Pol Pot and Ta Mok, and Dunlop interviewed Duch for the Far Eastern Economic Review. Duch surrendered to the authorities in Phnom Penh following the publication of his interview.[13]

On 31 July 2007, Duch was formally charged with crimes against humanity and detained by Cambodia's United Nations-backed Cambodia Tribunal. Duch, represented by Cambodian lawyer Kar Savuth and French lawyer Francois Roux, appealed against his provisional detention by the Extraordinary Chambers in the Courts of Cambodia based on the more than eight years he spent without trial in Cambodian military detention. The appeal was unsuccessful and on 14 August 2008, the tribunal issued its indictment after completing their investigation of Duch.[14]

In February 2008, as part of the judicial process, Duch was taken to the scene of his crimes. He reportedly collapsed in tears after stating, "I ask for your forgiveness – I know that you cannot forgive me, but I ask you to leave me the hope that you might."[15]

On 16 February 2009, the UN supervised trial of Duch began at a Phnom Penh court. Duch was prosecuted by international co-prosecutors William Smith and Anees Ahmed and was charged with "personally overseeing the systematic torture of more than 15,000 prisoners".[2] The presiding judge of the case was Nil Nonn. Duch was tried by a panel of five judges — three Cambodian, one French and one New Zealander — according to a 2003 pact between Cambodia and the United Nations establishing the tribunal.[14]

On 30 March 2009, Duch testified that US policies in the 1970s contributed to the brutal regime's rise to power.[16] "I think the Khmer Rouge would already have been demolished," he said of their status by 1970. "But Mr Kissinger (then US secretary of state) and Richard Nixon were quick [to back coup leader Gen Lon Nol], and then the Khmer Rouge noted the golden opportunity." "Because of this alliance, the Khmer Rouge were able to build up their power over the course of their 1970–75 war against the Lon Nol regime", Duch said.

On 31 March 2009, Duch, in a statement in front of the Cambodia tribunal, accepted responsibility for torturing and executing thousands of inmates, expressed "heartfelt sorrow" for his crimes and vowed to cooperate fully with the tribunal.[17]

Duch surprised the tribunal on 27 November 2009 with a plea to be released. In his final statement before the tribunal he acknowledged his involvement in Khmer Rouge-era crimes, including the execution of more than 12,000 Tuol Sleng prisoners, but said they were committed by a "criminal party". Duch also noted that he had served more than 10 years in detention, and stressed that he had been fully cooperative with the tribunal. There were also conflicting closing arguments from Duch's defense team. His Cambodian lawyer, Kar Savuth demanded his client’s acquittal and release, while his international counterpart, François Roux pressed judges to hand down a lenient sentence.[18]

At the conclusion of the trial, prosecutors asked that Duch be given 40 years in prison if convicted.[19] On 26 July 2010, Duch was found guilty of crimes against humanity, torture, and murder; he was sentenced to 35 years' imprisonment, with a pre-trial detention credit of 11 years being applied to his sentence and an additional controversial five year deduction because his period of pre-trial detention exceeded the maximum allowed under Cambodian law.[20][21] If he serves his entire sentence in prison, he will be released in 2029 at age 87.