Möbius strip
This article is about the mathematical object. For musical group, see Mobius Band (band). 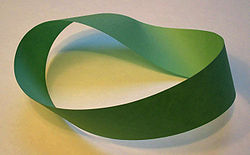 A Möbius strip made with a piece of paper and tape. If an ant were to crawl along the length of this strip, it would return to its starting point having traversed every part of the strip (on both sides of the original paper) without ever crossing an edge.

The Möbius strip or Möbius band (pronounced UK: /ˈmɜːbiəs/ or US: /ˈmoʊbiəs/ in English, [ˈmøːbi̯ʊs] in German) (alternatively written Mobius or Moebius in English) is a surface with only one side and only one boundary component. The Möbius strip has the mathematical property of being non-orientable. It can be realized as a ruled surface. It was discovered independently by the German mathematicians August Ferdinand Möbius and Johann Benedict Listing in 1858.[1][2][3]

A model can easily be created by taking a paper strip and giving it a half-twist, and then joining the ends of the strip together to form a loop. In Euclidean space there are in fact two types of Möbius strips depending on the direction of the half-twist: clockwise and counterclockwise. That is to say, it is a chiral object with "handedness" (right-handed or left-handed).

It is straightforward to find algebraic equations the solutions of which have the topology of a Möbius strip, but in general these equations do not describe the same geometric shape that one gets from the twisted paper model described above. In particular, the twisted paper model is a developable surface (it has zero Gaussian curvature). A system of differential-algebraic equations that describes models of this type was published in 2007 together with its numerical solution.[4]

The Euler characteristic of the Möbius strip is zero.

The Möbius strip has several curious properties. A line drawn starting from the seam down the middle will meet back at the seam but at the "other side". If continued the line will meet the starting point and will be double the length of the original strip. This single continuous curve demonstrates that the Möbius strip has only one boundary.

Cutting a Möbius strip along the center line yields one long strip with two full twists in it, rather than two separate strips; the result is not a Möbius strip. This happens because the original strip only has one edge which is twice as long as the original strip. Cutting creates a second independent edge, half of which was on each side of the scissors. Cutting this new, longer, strip down the middle creates two strips wound around each other, each with two full twists.

A strip with an odd-number of half-twists, such as the Möbius strip, will have only one surface and one boundary. A strip twisted an even number of times will have two surfaces and two boundaries. 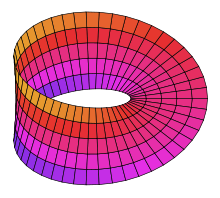 A parametric plot of a Möbius strip 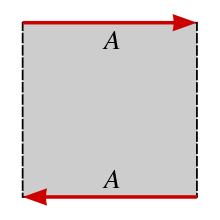 To turn a rectangle into a Möbius strip, join the edges labelled A so that the directions of the arrows match.

One way to represent the Möbius strip as a subset of R3 is using the parametrization:

In cylindrical polar coordinates (r, θ, z), an unbounded version of the Möbius strip can be represented by the equation:

A less used presentation of the Möbius strip is as the orbifold quotient of a torus.[5] A torus can be constructed as the square [0,1] × [0,1] with the edges identified as (0,y) ~ (1,y) (glue left to right) and (x,0) ~ (x,1) (glue bottom to top). If one then also identified (x,y) ~ (y,x), then one obtains the Möbius strip. The diagonal of the square (the points (x,x) where both coordinates agree) becomes the boundary of the Möbius strip, and carries an orbifold structure, which geometrically corresponds to "reflection" – geodesics (straight lines) in the Möbius strip reflect off the edge back into the strip. Notationally, this is written as T2/S2 – the 2-torus quotiented by the group action of the symmetric group on two letters (switching coordinates), and it can be thought of as the configuration space of two unordered points on the circle, possibly the same (the edge corresponds to the points being the same), with the torus corresponding to two ordered points on the circle.

A simple construction of the Möbius strip which can be used to portray it in computer graphics or modeling packages is as follows :

Occurrence and use in mathematics

The space of unoriented lines in the plane is diffeomorphic to the open Möbius band.[6]

These equations, which give the same line, are identified with the points (λa,λb,λc). Thus, the space of lines in the plane is a (proper) subset of the real projective plane; where the equation ax + by + c = 0 corresponds to the point (a:b:c) in homogeneous coordinates. It is only a subset because some equations of the form ax + by + c = 0 do not give lines. We need to disallow a = b = 0 to be sure that the equation ax + by + c = 0 does indeed give a line. The space of unoriented lines in the plane is given by deleting the point (0:0:c) = (0:0:1) from the real projective plane. This space is exactly the open Möbius band.

The edge of a Möbius strip is topologically equivalent to the circle. Under the usual embeddings of the strip in Euclidean space, as above, this edge is not an ordinary (flat) circle. It is possible to embed a Möbius strip in three dimensions so that the edge is a circle. One way to think of this is to begin with a minimal Klein bottle immersed in the 3-sphere and take half of it, which is an embedded Möbius band in 4-space; this figure M has been called the "Sudanese Möbius Band". (The name comes from a combination of the names of two topologists, Sue Goodman and Daniel Asimov). Applying stereographic projection to M puts it in 3-dimensional space, as can be seen here as well as in the pictures below. (Some have incorrectly labeled the stereographic image in 3-space "Sudanese", but this is rather an image of the actual Sudanese one, which has a high degree of symmetry as a Riemannian surface: its isometry group contains SO(2). A well-known parametrization of it follows.)

To see this, first consider such an embedding into the 3-sphere S3 regarded as a subset of R4. A parametrization for this embedding is given by {(z1(η,φ), z2(η,φ))}, where

A closely related 'strange' geometrical object is the Klein bottle. A Klein bottle can be produced by gluing two Möbius strips together along their edges; this cannot be done in ordinary three-dimensional Euclidean space without creating self-intersections.[7]

In graph theory, the Möbius ladder is a cubic graph closely related to the Möbius strip. 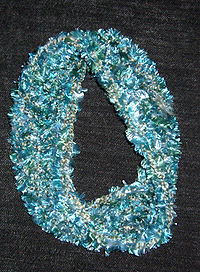 A scarf designed as a Möbius strip.

There have been several technical applications for the Möbius strip. Giant Möbius strips have been used as conveyor belts that last longer because the entire surface area of the belt gets the same amount of wear, and as continuous-loop recording tapes (to double the playing time). Möbius strips are common in the manufacture of fabric computer printer and typewriter ribbons, as they allow the ribbon to be twice as wide as the print head while using both half-edges evenly.

A device called a Möbius resistor is an electronic circuit element that has the property of canceling its own inductive reactance. Nikola Tesla patented similar technology in the early 1900s:[9] "Coil for Electro Magnets" was intended for use with his system of global transmission of electricity without wires.

The Möbius strip is the configuration space of two unordered points on a circle. Consequently, in music theory, the space of all two note chords, known as dyads, takes the shape of a Möbius strip; this and generalizations to more points is a significant application of orbifolds to music theory.[10][11]