Arrasate or Mondragón (Basque and Spanish official names, Mondragoe is an unofficial Basque name) - is a town and municipality in Gipuzkoa province, Basque Country, Spain. Its population on 31 December 2007 was 22,112. 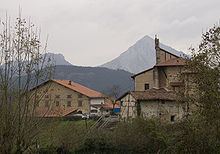 A country house near Mondragón

It is known mainly as the place of origin of the Mondragón Cooperative Corporation (MCC), the world's largest worker cooperative, whose foundation was inspired in the 1940s by Father José María Arizmendiarrieta. In 2002 the MCC contributed 3.7% towards the total GDP of the Basque Country and 7.6% to the industrial GDP. The valley of the High Deba where it is located enjoyed a high level of employment in the 1980s while the rest of the Basque industrial areas suffered from the steel crisis.

Noted poverty expert and sociology professor Barbara J. Peters (Southampton College, Long Island University) has studied the incorporated and entirely resident-owned Basque town of Mondragón, Spain. "In Mondragón, I saw no signs of poverty. I saw no signs of extreme wealth," Peters said. "I saw people looking out for each other…..It's a caring form of capitalism.”[1]

The spa at Santa Águeda (now a psychiatric hospital) was the location of the 1897 murder of Spanish politician Antonio Cánovas del Castillo by Michele Angiolillo.

Mondragon also serves as base of Mondragon University, a private university created on 1997, which is heavily connected with the MCC companies. Almost all the graduates find their first job within 3 months after completing their studies due to this strong link. Mondragon University is divided in an engineering, humanities and enterprise faculties. The faculty of engineering is both at Mondragon and Goierri. The humanities one is located at Escoriaza, and the enterprise one at Bidasoa and Oñati. It currently has a volume of students of about 3500, which is growing fast. Almost all the students are from Gipuzkoa and surrounding villages, although in the last years, the number of students from Bilbao, San Sebastián and the Basque Country capital, Vitoria-Gasteiz, has increased significantly.