North Marston is a village and also a civil parish within Aylesbury Vale district in Buckinghamshire, England. It is located about three miles south of Winslow, and four miles north of Waddesdon.

The village name 'Marston' is a common one in England, and is Anglo-Saxon for 'farm by a marsh'. This refers to the common state of the land in the Aylesbury Vale, where the water table is quite high. The prefix 'North' was added later to distinguish the village from nearby Fleet Marston. The population of the village is approximately 700 and there are about 500 houses.

The facilities in North Marston include:

A recent project within the village has re-created the sports field, which is now called the North Marston and Granborough Community Sports Field. In the field there is a pavilion, football pitch, running track, nature trail and cricket nets. There is a cricket team (North Marston & Granborough Cricket Club).

A community shop in the village is now established. Construction work started on The Shop North Marston on November 11, 2010 and opened in June 2011. 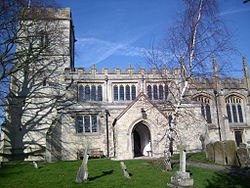 The parish church is dedicated to the Assumption of the Blessed Virgin Mary and the foundation stones of the church on this site were laid around the 12th century. Pilgrim money enabled the nave roof to be raised and clerestory windows put in. The inner part of the tower dates back to the 15th century: from 2002 to 2004 all of the outer stones were replaced due to crumbling. There are six bells in the tower - tuned to the key of F - and a tenor weight of 13-2-27 from 1925 (with original inscriptions dating from as far back as C16th). There is a plan to build a meeting room, with kitchen and toilet facilities on the north side of the church, to replace those facilities of the Methodist chapel, which it is planned to sell. Since 2004, when the Methodist Chapel closed, the Parish Church has been in a Local Ecumenical Partnership with the Methodists. 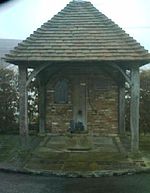 There is a holy well in the village, found by Sir St John Schorne, who was rector of the parish of North Marston in about 1290. He was referred to as a saint who, it is claimed, performed many miracles. It was he that blessed the village well and after his death it became a resort of great pilgrimage. Pilgrims probably stayed at one or two of the houses in Church Street that still stand today, but most of the houses were destroyed in a later fire. The Holy Well was renovated in 2004/2005, after many other designs had been put in place. On the day of its official re-opening a poem was read; this can be found here, with some 'before' and 'after' pictures.

Education in the Village

The North Marston Church of England School is a mixed Church of England primary school. It is a voluntary controlled school, which takes children from the age of four through to the age of eleven. The school has approximately 100 pupils. It is situated across the road from the parish church. The school has 3 "houses" each named for local reasons: Camden Neild (Red,) Verney (Green,) Schorne (Blue.)

The Village has a pre-school called Schorne Pre-School which has been running for around twenty years now.

Pictures of the village