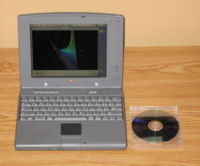 The PowerBook Duo was a line of small subnotebooks manufactured and sold by Apple Computer from 1992 until 1997 as a more compact companion to the PowerBook line. Improving upon the PowerBook 100's portability (its immediate predecessor and Apple's third smallest laptop), the Duo came in seven different models. They were the Duo 210, 230, 250, 270c, 280, 280c, and 2300c, with the 210 and 230 being the earliest, and 2300c being the final incarnation before the entire line was dropped in early 1997.

Weighing in at a mere 4.1 pounds and slightly smaller at 10.9 × 8.5 in (280 × 220 mm) than a sheet of paper, only 1.4" thick, it was the lightest and smallest of all of Apple's PowerBooks of its time. Only the MacBook Air weighs less, though wider and deeper, but considerably thinner making it the second smallest subnotebook overall. The Duo had the most in common with the original MacBook Air which only included one USB 2.0 port, one video port (requiring an adapter) and one speaker port, but no ability for expansion.[1]

The PowerBook Duo line was replaced by the PowerBook 2400, which was slightly larger in size to the Duos, but still only the fifth smallest behind the 12 in (300 mm) PowerBook G4 which succeeded it as fourth smallest. Although both featured much more onboard functionality, they lacked docking capability. Apple presently only offers the MacBook Air in the subnotebook category.

The Duo line offered an ultraportable design that was light and functional for travel and infinitely expandable via its unique docking connector. However certain compromises were made to achieve this level of portability. The Duo series used an 88% of standard desktop-sized keyboard which was criticized for being difficult to type on. Likewise the trackball was reduced in size from even that used on the PowerBook 100. The only usable port which came standard on the Duo was a dual printer/modem EIA-422 serial port.

There was a slot for an expensive optional built-in 14.4 Express Modem and no provision for built-in Ethernet. This somewhat limited configuration meant the only way to move data in or out of the laptop in a stock configuration without purchasing additional accessories was via a relatively slow AppleTalk connection, which was not practical in the event of hard drive problems. Compensating for these limitations, the initial Duo offering provided for a considerably larger RAM limit of 24 MB (to the 100 series' 14 MB), and a standard 80 MB hard drive (to the 100's 40 MB). The debut year for the duo only offered a passive matrix display on both the mid-level and high-end models. In contrast to the high end of the 100-series line with which the Duos shared the same processors, the PowerBook 170 and 180 with their crisp active matrix displays were both already in great demand over the lower powered models with passive matrix displays. The following year, Apple replaced the earlier models with both an active matrix display and a color active matrix display, the latter becoming the de facto standard of the PowerBook line. The respective Duo models are easily differentiated by their display method and processor. All other features are identical.

The 2xx Duos were powered by either Motorola 68030 or 68LC040 processors, ranging from 25-33 MHz. When Apple debuted its next-generation PowerPC processors in 1994, it took nearly two years for the first PowerPC Duo (the 2300c) to debut. The original PowerPC 601, like the original 68040 before it, produced too much heat and consumed too much power for Apple to use in any laptop, but by the end of 1995 the more efficient PowerPC 603e had been developed, which was featured in the Duo 2300c as well as its full size companion, the PowerBook 5300 series. The PowerPC 603e was designed for a 64-bit bus, but was engineered by Apple to run on an older 32-bit bus to maintain compatibility with the Duo Docks. This led to poor system and video performance.

PowerBook Duos lacked most common ports (featuring only one internal printer/modem serial port and an optional fax/modem card port). In their place was docking ability, accomplished via a unique 156-pin Processor Direct Slot giving the docks full access to the Duo's CPU and data buses. Several dock options were offered by Apple as well as third parties.

This was the largest and most expensive dock for the PowerBook Duo and the only form-factor offered exclusively by Apple. Unlike the other docks, or "port replicators" that plugged into the back of other laptops, the Duo Dock pulled the laptop inside the dock's metal and plastic case via an internal sliding mechanism (similar to that of a VHS player). The dock turned the PowerBook Duo into a full-size, AC-powered, fully functional desktop computer with all the standard ports.[1]

Like a desktop computer, the dock could physically support a heavy, high-resolution CRT display on top. The Duo Dock included a floppy drive on the side, two NuBus expansion slots, an optional FPU, level 2 cache, a slot for more VRAM to enable more colors at higher resolutions, and space for a second hard drive.[1] The original Duo Dock was replaced by the Duo Dock II, which added AAUI networking and compatibility with newer color-screen PowerBook Duos. A replacement lid was offered to allow use of the thicker color Duos with the original Duo Dock. The Dock II was followed by the Duo Dock Plus, which was identical to the Duo Dock II, but lacked the FPU and level 2 cache—which were not compatible with the 68LC040-processor Duo 280 and PowerPC-processor Duo 2300c. While the laptop's LCD display obviously could not be opened when inside the dock, additional NuBus video cards could be installed to drive up to three monitors.

The Mini Dock was a port expander for the PowerBook Duo and was popularly offered by many third-party manufacturers as well as Apple. When attached, the PowerBook Duo could be plugged into various standard desktop devices including SCSI, ADB, serial, floppy, external speakers, and an external display. This type of dock also allowed the Duo's internal LCD and battery to be used. Third party contributions to the Mini Dock added a variety of specialized custom options including Ethernet capability, NTSC and PAL video ports. The only significant difference between these docks and a full desktop configuration was the lack of custom PDS or NuBus expansion slots, which were included on all standard desktop Macs, a shortfall made up in task specific third party dock offerings.

This type of dock was manufactured by both Apple and many third parties, and gave the PowerBook Duo up to three extra ports in a minimal configuration. Examples include floppy, SCSI, video and Ethernet docks, each typically included one ADB port as well. This was the least expensive, and most basic of the docks. This type of dock allowed the Duo's internal LCD to be used as well, and could run on the Duo's internal battery for a reduced amount of time. Popular due to the minimal impact in accessories that must be carried with the Duo, they offered a practical alternative to emergency hard disk and software situations and task specific needs.

The 2300 was the last Apple product to carry any vestige of the Snow White design language, which Apple had been phasing out since 1990. Drawing heavily upon improvements made to the original PowerBook 140 design, the Duo series continues many of the stylistic features of the PowerBook 100, which is approximately equivalent in size and weight. In addition to the Snow White features, the Duo takes the 100's radius curves a step further along both the top of the display as well as the front and sides and which is also heavily mirrored in the various docks.

The PenLite was an early tablet PC prototyped by Apple Computer in 1993 around the same time as the Apple Newton. It was not a PDA but rather a complete computer. The project was canceled in 1994 due to the similarity to the Newton.[2]

The Penlite was based on the PowerBook Duo and was meant to be a tablet-style addition, with a stylus as the input device. It was designed to be compatible with PowerBook Duo docks and accessories[3] and ran the normal Mac OS.

An Apple PowerBook Duo 270c. This model was often seen in the media

One of the most stylish and iconic of the laptops available at the time, the Duo was widely used in advertising, film and television.