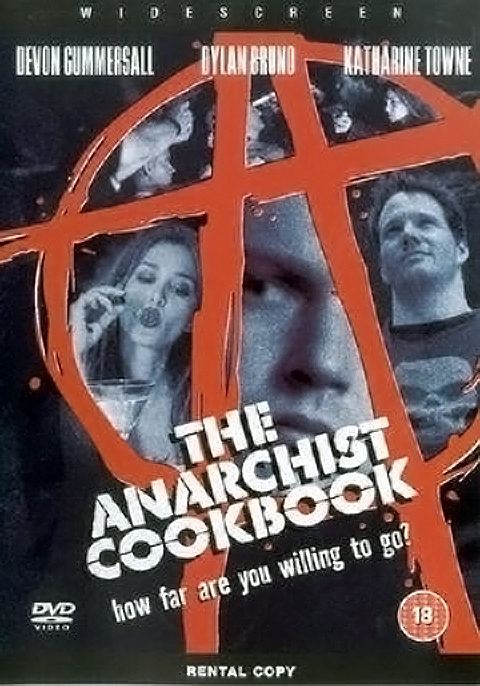 "The Anarchist Cookbook" is a 2002 film directed by . The movie is about a young honors student-turned-anarchist, Puck (), and his group of anarchist friends living peacefully in a Dallas commune until a nihilist, Johnny Black (), appears with "" and completely destroys their way of life.

The movie was heavily criticized by anarchists for its poor presentation of , philosophy, and ethics, which they felt amounted to anti-anarchist propaganda.

The story is narrated by the protagonist, Puck (real name Peter Leslie Gold), who begins with a monologue describing the basics reasoning underlying his philosophy, as well as the movie's general interpretation of Anarchism, as he walks through the commune he lives in, while events of his daily life are presented.

Other members of the commune include Johnny Red, a '60s radical who constantly refers to as an ideal society; Gin, Red's girlfriend; Karla, a bisexual with issues of ; Sweeny, a promiscuous DJ who worked at a local record store; Double D (real name David Dwight), an unintelligent but good hearted commune member, and Puck's best friend; and "The Trolls," a ragtag group of "crunchy types" who lived in tents in the backyard of the house and home schooled about a dozen children. The commune, referred to as "Sam," is funded by a collective Anarchist bookstore, where the members take turns operating the front desk. Throughout the movie this group is referred to as "The Family," and their way of life is described as peaceful and happy, until the day Johnny Black, a mysterious, militant nihilist with a forceful personality, appears.

Johnny Black shares much of the rebellious philosophy of "the family" when he shows up, however he disrespects what he sees as the narrow minded and shortsighted protest tactics Johnny Red espouses, encouraging the group to forge alliances with "like-minded" organizations. Over time, Black undergoes a more militant shift in personality. At a meeting for a planned protest demonstration against a plant, Black denounces the peaceful, non-violent approach most of the attendants support, and presents two tools to be used in their attack on the plant: and "".

Johnny Red describes the book as "a relic from the past... it taught you how to make bombs, how to make drugs... and it meant something once." He also accurately mentions that the author, William Powell, has disavowed the book. He continues, commenting, "the book's not the problem. The problem is the kind of people who look to it for answers."

A few days afterward, Johnny Black discovers Red's private journal, in which he admits to being sexually attracted to young boys. He places this in the open for Gin to discover, and after reading a passage in which Red admits to his , she dumps him. Following this, Red's personality becomes more anxious and submissive to Black.

One day, while carrying miscellaneous boxes, Puck, Double D, and Sweeney are approached by a police officer who randomly stops them and requests to inspect their contents. After complying, they receive a ride from the officer to Sam, explaining that their run down house is in fact an orphanage the science kits are intended for. The officer decides to visit the building, and enters to discover Karla in the midst of using cocaine with Johnny Black. The entire group, except for Johnny Red, is promptly arrested and brought to trial, the presiding judge ironically being a spurned, former lover of Karla. The flop house, Sam, is shut down by the city; Johnny Black receives time at a medium security prison, with the possibility for parole in four months; Sweeney and Double D each receive 250 hours of community service; Karla, aside from being subtly insulted by the judge, is made to receive a mandatory psychiatric evaluation; and Puck is placed under house arrest for 180 days, and forced to move into his parent's home in the city of Plano, .

Puck chafes in his suburban life, but comes to accept it with Jody's encouragement, until Johnny Black is paroled after four months. Black appears in Puck's apartment and easily convinces Puck to remove the ankle bracelet that tracks him and to rejoin the group, which has relocated at a new squat which they name "Son of Sam". He soon discovers that Karla, Sweeney, and Double D are all suffering from drug addiction. The next stage of Johnny Black's strategy for his movement is the creation of a coalition of organizations which agree with any facet of his goals. However, these include extremist, conservative groups, such as neo-nazis and militia men.

Black offers "The Anarchist Cookbook" as an instructional booklet to the other groups, while they pledge to offer various arms and explosives, and plans a "joint mission" to attack a local university. Puck attempts to leave the organization, but is under constant surveillance. He commits to remaining in the group, so as to watch over Double D, for whom he feels responsible. This situation eventually ends in tragedy when Double D overdoses on . Puck finally resolves to escape from the group and prevent the mission, and convinces a sober Sweeney and Johnny Red to help. Together, they devise a plan to intoxicate the extremist group members with pancakes laced with the very drugs Double D overdosed on.

Once the entire organization is unconscious, the surviving members of The Family split up. Alone, Puck decides that once the group awakens he'd be in immediate danger, and so decides to report the organization and cooperate fully with the FBI, for which he receives a reward of $200,000. Immediately afterward, Puck considers his options and realizing that he now has the money and time to commit to his future, decides to take Jody's advice and return to college.

He begins to hitchhike to California to join Jody as she s at the . Receiving a ride from a truck driver, Puck is asked what his name is, and after some internal thinking, decides to accept his legal name and chosen name together: "Peter Puck." The final monologue by Puck meditates over his new perspective on life and his personal philosophy, and renounces the concept of "freedom without responsibility," which contrasts with his idealistic opening-sequence monologue.

In an interview, director commented that inspirations for the film included "Animal House, Battle of Algiers and ... Everywhere Chico and Harpo Marx went, anarchy ensued. When they spread their anarchy, it was the most joyous thing you had ever seen. I made (lead actor Devon Gummersall) watch Duck Soup, and he saw what I wanted to show, which was a sense of personal freedom and autonomy." [ [http://www.filmstew.com/ShowArticle.aspx?ContentID=6354 Anarchy in the U.S.A.] . filmstew.com Accessed April 27, 2007]

The movie was received with mostly negative criticism. "" shows a freshness rating of 41% (with a 33% rating from the 'Cream of the Crop' critics),

"" magazine also published a review of the film with a similar critique: