Banbury Road is a major arterial road in Oxford, England, running from St Giles' at the south end, north towards Banbury through the leafy suburb of North Oxford and Summertown, with its local shopping centre. Parallel and to the west is the Woodstock Road, which it meets at the junction with St Giles'. To the north, Banbury Road meets the Oxford Ring Road at a roundabout. The road is designated the A4165 (which continues for a short distance as Oxford Road to Kidlington). 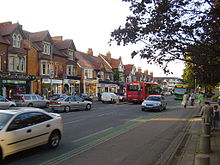 Shops on Banbury Road in Summertown 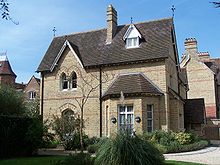 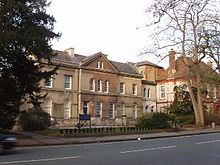 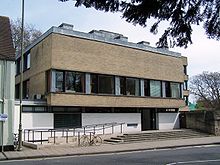 The Mathematical Institute, near the southern end of Banbury Road.

The former residence of the lexicographer James Murray, first editor of the Oxford English Dictionary, at 78 Banbury Road, opposite the junction with St Margaret's Road. Note the pillar box in front of the house, installed because of the volume of post that he sent, with a commemorative blue plaque behind, added in 2002.[2]

The Mathematical Institute of Oxford University is at the lower end of the road on the east side. Opposite Keble Road is St Giles' Church, built in 1120 and consecrated in 1200. Further north are the Denys Wilkinson Building (astrophysics) and the prominent 1960s Thom Building of the Engineering Science department.

St Anne's College backs onto Banbury Road and St Hugh's College flanks the road further up. Both are former women's colleges of the University. Kellogg College and Wycliffe Hall, which are also part of the university are situated on Banbury Road, near to the junction with Bevington Road. The Independent Sixth Form of d'Overbroeck's College is in the Swan Building at 111 Banbury Road.

BBC Oxford is also based on the Banbury Road and is home to the local televised news output and BBC Radio Oxford. In early 1970 the BBC Oxford studios were actually located further down at 242-254 Banbury Road (now a Marks & Spencer supermarket), but were later moved to 269 in 1989 as local media services within BBC Oxford expanded.

Famous residents include the lexicographer James Murray who produced the first Oxford English Dictionary (a blue plaque now marks the site) and the zoologist Desmond Morris, author of The Naked Ape.

Jesse Elliston, the proprietor of what became Oxford's leading department store, Elliston & Cavell, died in the Banbury Road in 1853 at the age of only 47.