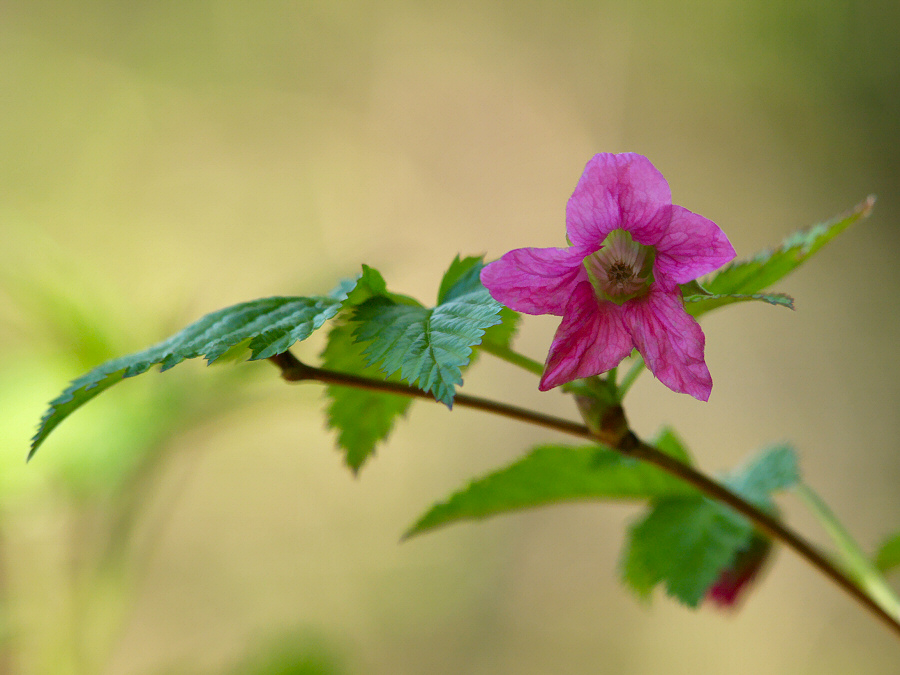 "Rubus spectabilis" (Salmonberry) is a species of "" native to the west coast of North America from southern Alaska to California.

It is a shrub growing to 1–4 m tall, with perennial, not biennial woody stems (unlike other species). The leaves are trifoliate, 7–22 cm long, the terminal leaflet larger than the two side leaflets. The leaf margins are toothed. The flowers are 2–3 cm diameter, with five purple petals; they are produced from early spring to early summer. The fruit matures in late summer to early autumn, and resembles a large yellow to orange-red raspberry 1.5-2 cm long with many lets.

In Washington State the berries can ripen from mid-June to late-July.

Salmonberries are found in moist forests and stream margins, especially in the coastal forests. They often form large thickets, and thrive in the open spaces under stands of ("Alnus rubra").

In Kodiak, Alaska, orange salmonberries are often referred to as "Russian berries".Fact|date=August 2007

Salmonberry shares the fruit structure of the raspberry, with the fruit pulling away from its receptacle. Books often call the fruit "insipid"

They are important food for Native Americans. It is one of the numerous berries gathered to incorporate into . It is said that the name came about because of the First Nations fondness for eating the berries with half-dried salmon roe.

It is widely grown as an for its flowers. It has escaped cultivation and become naturalized in parts of northwestern Europe, including Great Britain, Ireland and the .