Charles Wilkes (April 3, 1798 – February 8, 1877) was an American naval officer and explorer. He led the United States Exploring Expedition, 1838-1842 and commanded the ship in the Trent Affair during the American Civil War (1861–1865). Although credited with several "firsts", his behavior led to two convictions at court-martial.

Wilkes was born in New York City, on April 3, 1798, as the great nephew of the former Lord Mayor of London John Wilkes. His mother was Mary Seton, who died in 1802 when Charles was just three years old. As a result, Charles was raised by his aunt, Elizabeth Ann Seton, a convert to Roman Catholicism who was the first American-born woman to be canonized a saint by the Catholic Church. When Elizabeth was left widowed with five children, Charles was sent to a boarding school, and later attended Columbia College, which is the present-day Columbia University. He entered the United States Navy as a midshipman in 1818, and became a lieutenant in 1826.

In 1833, for his survey of Narragansett Bay, he was placed in charge of the Navy's Department of Charts and Instruments, out of which developed the Naval Observatory and Hydrographic Office. Wilkes' interdisciplinary expedition (1838–1842) set a physical oceanography benchmark for the office's first superintendent Matthew Fontaine Maury.

During the 1820s, Wilkes was a member of the prestigious society, Columbian Institute for the Promotion of Arts and Sciences, which counted among its members former presidents Andrew Jackson and John Quincy Adams and many prominent men of the day, including well-known representatives of the military, government service, medical and other professions.[1]

USS Vincennes in Disappointment Bay, Antarctica, during the Wilkes expedition.

In 1838, although not yet a seasoned naval line officer, Wilkes was experienced in nautical survey work, and was working with civilian scientists. Upon this background, he was given command of the government exploring expedition "... for the purpose of exploring and surveying the Southern Ocean, . . . as well to determine the existence of all doubtful islands and shoals, as to discover, and accurately fix, the position of those which [lay] in or near the track of our vessels in that quarter, and [might] have escaped the observation of scientific navigators." The U.S. Exploring Squadron was authorized by act of the Congress on May 18, 1836.

The United States Exploring Expedition, commonly known as the "Wilkes Expedition", included naturalists, botanists, a mineralogist, taxidermists, artists and a philologist, and was carried by the USS Vincennes (780 tons) and Peacock (650 tons), the brig Porpoise (230 tons), the store-ship Relief, and two schooners, Sea Gull (110 tons) and Flying Fish (96 tons).[2]

Departing from Hampton Roads on August 18, 1838, the expedition stopped at the Madeira Islands and Rio de Janeiro, Argentina; visited Tierra del Fuego, Chile, Peru, the Tuamotu Archipelago, Samoa, and New South Wales; from Sydney, Australia sailed into the Antarctic Ocean in December 1839 and reported the discovery "of an Antarctic continent west of the Balleny Islands". Next, the expedition visited Fiji and the Hawaiian Islands in 1840. In July 1840, two sailors, one of whom was Wilkes' nephew, Midshipman Wilkes Henry, were killed while bartering for food on Fiji's Malolo Island. Wilkes retribution was swift and severe. According to an old man of Malolo Island, nearly 80 Fijians were killed in the incident.

From December 1840 to March 1841, he employed hundreds of native Hawaiian porters and many of his men to haul a pendulum to the summit of Mauna Loa to measure gravity. Instead of using the existing trail, he blazed his own way, taking much longer than he anticipated. The conditions on the mountain reminded him of Antarctica. Many of his crew suffered snow blindness, altitude sickness and foot injuries from wearing out their shoes.[3] 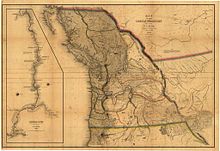 Pacific Northwest: 1841 Map of the Oregon Territory from Narrative of the United States Exploring Expedition

He explored the west coast of North America, including the Strait of Juan de Fuca, Puget Sound, the Columbia River, San Francisco Bay and the Sacramento River, in 1841. He held the first American Independence Day celebration west of the Mississippi River in Dupont, Washington on July 5, 1841.[4][5]

The United States Exploring Expedition passed through the Ellice Islands and visited Funafuti, Nukufetau and Vaitupu in 1841.[6] The expedition returned by way of the Philippines, the Sulu Archipelago, Borneo, Singapore, Polynesia and the Cape of Good Hope, reaching New York on June 10, 1842.

After having completely encircled the globe (his was the last all-sail naval mission to do so), Wilkes had logged some 87,000 miles and lost two ships and 28 men. Wilkes was court-martialled upon his return for the loss of one of his ships on the Columbia River bar, for the regular mistreatment of his subordinate officers, and for excessive punishment of his sailors. A major witness against him was ship doctor Charles Guillou.[7] He was acquitted on all charges except illegally punishing men in his squadron. For a short time, he was attached to the Coast Survey, but from 1844 to 1861, he was chiefly engaged in preparing the report of the expedition.

His Narrative of the United States Exploring Expedition (5 volumes and an atlas) were published in 1844. He edited the scientific reports of the expedition (20 volumes and 11 atlases, 1844–1874) and was the author of Vol. XI (Meteorology) and Vol. XIII (Hydrography). Alfred Thomas Agate, engraver and illustrator, was the designated portrait and botanical artist of the expedition. His work was used to illustrate the Narrative of the United States Exploring Expedition.[8]

Other valuable contributions were the three reports of James Dwight Dana on Zoophytes (1846), Geology (1849) and Crustacea (1852–1854). Moreover, the specimens and artifacts brought back by expedition scientists ultimately formed the foundation for the Smithsonian Institution collection. In addition to many shorter articles and reports, Wilkes published the major scientific works Western America, including California and Oregon in 1849, and Theory of the Winds in 1856.

Wilkes was promoted to the rank of commander in 1843 and that of captain in 1855. At the outbreak of the American Civil War, he was assigned to the command of the USS San Jacinto to search for the Confederate commerce destroyer Sumter. 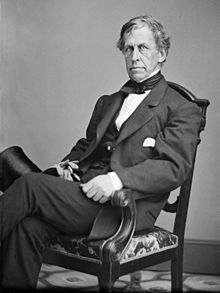 As part of these duties he visited the British colony of Bermuda. Acting on orders, Wilkes remained in port for nearly a week aboard his flagship the Wachusett, violating the British rule that allowed American naval vessels (of either side) to remain in port for only a single day. While Wilkes remained in port, his gunboats Tioga and Sonoma blockaded Saint George's harbor, a key Confederate blockade runner base. The gunboats opened fire at a Royal Mail Steamer, the Merlin.

When Wilkes learned that James Murray Mason and John Slidell, two Confederate commissioners to England, were bound for England on the British mail packet Trent, he ordered the steam frigate San Jacinto to stop them. On November 8, 1861, the San Jacinto met the Trent and fired two shots across its bow, forcing the ship to stop. A boarding party from the San Jacinto led by its captain then boarded the Trent and arrested Mason and Slidell. The diplomats were taken to Fort Warren in Boston Harbor.

The actions of "The Notorious Wilkes" — as Bermuda media branded him — convinced many that full-scale war between the United States and the United Kingdom was inevitable.[9]

He was officially thanked by Congress. However, his action was later disavowed by President Lincoln due to diplomatic pressure by the British Government. (Mason and Slidell were released.) His next service was in the James River flotilla. Subsequently, after reaching the rank of commodore on July 16, 1862, he was assigned to duty against blockade runners in the West Indies.

Despite his accomplishments, Wilkes acquired a reputation as sometimes arrogant and capricious. This may have been partly due to his open conflict with Gideon Welles, who was the Secretary of the Navy. Secretary Welles recommended that Wilkes had been too old to receive the rank of commodore under the act then governing promotions. Wilkes wrote a scathing letter to Welles in response. This controversy ended in his court-martial in 1864. He was found guilty of disobedience of orders, insubordination, and other specifications. He was sentenced to public reprimand and suspension for three years. However, President Lincoln reduced the suspension to one year and the balance of charges were dropped. On July 25, 1866, he was promoted to the rank of rear admiral on the retired list.

Some historians speculate that Wilkes' obsessive behavior and harsh code of shipboard discipline shaped Herman Melville's characterization of Captain Ahab in Moby-Dick.[10] Such speculation is not mentioned in the U.S. Naval historical archives.

In addition to his contribution to U.S. Naval history and scientific study in his official Narrative of the Exploration Squadron (6 volumes), Wilkes wrote his autobiography.

Wilkes died in Washington, D. C. on February 8, 1877 at the rank of Rear Admiral. In August 1909, the United States moved his remains to Arlington National Cemetery. His gravestone says "he discovered the Ant-arctic continent".[11]

Admiral Charles Wilkes serves as the primary antagonist in an 8-page comic titled "The Wicked King", written by Jeff Pfaller and drawn by Sean Hill. Wilkes is obsessed with killing a mythological creature, called a ningen, that he encountered during his expedition to Antarctica. He returns to the ice with two famed occult hunters in an attempt to kill the creature. It was published in 2010 by Saint James Comics.[16]