What We Do Is Secret (film)

What We Do Is Secret (film)

Infobox Film
name = What We Do Is Secret 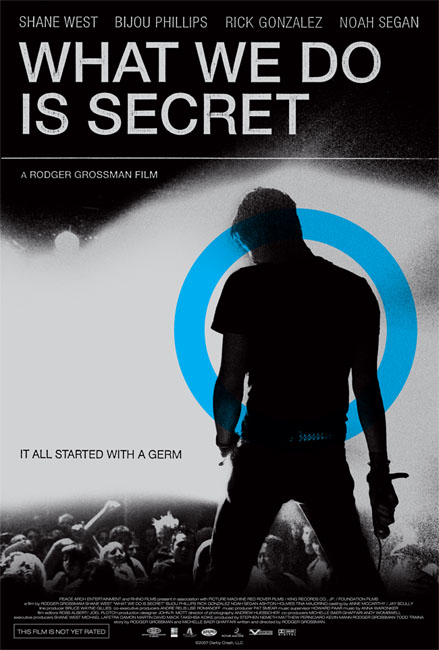 "What We Do Is Secret" is a directed by based on the seminal punk band, , and their lead singer, . Grossman also wrote the screenplay for the film, based on a story by Grossman and one of Darby’s best friends, Michelle Baer Ghaffari (who produced the film).

The film centers on the narrative of The Germs and their lead singers’ five-year plan to become a legend. The band’s history culminates with Crash’s tragic planned suicide, which was ironically overshadowed in the media by the assassination of .

After almost a decade of production beset by changes in production staff and adjustments in casting, filmmakers Grossman and Ghaffari created an original story that echoes the feel of the late 1970s Los Angeles punk rock scene and uncovers the untamed life of lead singer Darby Crash. Grossman admitted that the extended process was actually a blessing in disguise; it provided him the chance to conduct “thousands of hours of original interviews,” and the time to come across the film’s lead, , an actor he feels “did a masterful job capturing Crash on film.” [ [http://www.billboard.com/bbcom/news/article_display.jsp?vnu_content_id=1001017612 Billboard Article About the Film] ]

The film centers on the creation of The Germs and Crash’s five-year plan to become a legend. As the band grows in popularity and cultural impact, their fifth year culminates with Crash’s tragic planned suicide, which was overshadowed by the assassination of John Lennon the next day. With all the commotion surrounding Lennon’s death, not even the other band members knew of Crash's passing.

The film is produced by , , and as well as being independently produced and financed. The film was released at the on , , and is being distributed theatrically and on video by beginning August 2008.

Fusing an innovative mixture of narrative and documentary style, Grossman illustrates the wild story of – born Jan Paul Beahm – and his mysterious five-year plan to become a legend. The story begins as Paul is being expelled from , an experimental high school in West before forming the band with his friend, Georg (George) Ruthenberg.

Beahm and Ruthenberg with the band idea set in their minds, post flyers around town to recruit members. The flyers, in true Beahm form say, “Wanted: Two untalented girls who don’t know how to play their instruments to form a band.” They find Terri Ryan, who becomes the bassist, and Belinda Carlisle, on drums. Belinda, however, leaves the band before they ever practice or perform. A young woman named Becky (a.k.a. Donna Rhia) becomes the first drummer for . Beahm appoints himself lead singer and Ruthenberg chooses to pick up the guitar. Beahm endows each band member with a new stage name: George becomes ; Terri becomes ; and he names himself Bobby Pyn. He decides to name the band "Sophistifuck and the Revlon Spam Queens" but later realizes that the name requires more letters than they can afford to put on their t-shirts. The group settles on "The Germs".

At their first performance in lieu of not knowing how to play instruments, Beahm (as Bobby Pyn) manufactures chaos by starting a food fight with the audience. From their creation, The Germs earn the reputation amongst local bars and clubs of a fiery, uncontrollable stage spectacle, which makes it difficult for the band to book gigs. Bobby Pyn changes his name again, this time to the infamous Darby Crash, and decided that it was time for the band to get serious. Drummer Becky (as Donna Rhia) is forced out of the band, causing The Germs to go through a multitude of drummers before settling on Arizona transplant, Don Bolles – Born Jimmy Giorsetti. Bolles named himself after the Arizona journalist of the same name, who had recently been murdered by the Mafia. Bolles had heard The Germs’ EP, from What? Records, and drove from Pheonix to Los Angeles in hopes of joining the band. Shortly thereafter the group begins playing regularly at the Masque on North Cherokee Avenue, where they develop their talent and establish their notoriety throughout the underground punk scene. [ [http://www.laweekly.com/2001-01-04/news/annihilation-man/ Written by Brendan Mullen, owner of The Masque, co-author of Darby Crash biography, Lexicon Devil] ]

The Germs’ first single, the 7” Forming/Sexboy, was the first punk record in Los Angeles history, and was made from a barely audible live cassette recording of their second show at the Roxy. Chris Ashford, their first manager, was responsible for the groundbreaking album pressing with What? Records, but he would put the label on the wrong side of the record [ [http://www.hootpage.com/hoot_germs-trib.html Bill Bartell's Germ Tribute Page] ] .

Eventually, The Germs become so infamous they are prohibited from performing at every club in LA. In an attempt to circumvent the ban, The Germs perform under the name GI, which stood for “Germs Incognito.” After Crash’s death, Doon moved back to New York.

Throughout the film Darby talks about his five-year plan. As to how the plan will end, he merely says “you’ll see".

Everyone is caught off guard when Lorna receives a phone call informing her of Darby's suicide. The impact of Darby’s death was obscured by the untimely and dramatic assassination of John Lennon the next day.

as (born Jan Paul Beahm) is the film’s protagonist. As the frontman for The Germs, his unpredictable onstage performances include food fights, bottle breaking, chest slashing, and riot inciting. Darby’s interest in philosophy contributes to his insightful and poetic lyrics. He often speaks about the significance of circles, which are the inspiration for the band’s blue circle logo. Darby’s drug use takes a toll on the band, and ultimately leads to his demise. After a Germs farewell show, he intentionally overdoses on heroin, hoping to be remembered as a legend and a martyr. Much of the notoriety of the suicide was eclipsed by John Lennon’s assassination.

as (born Terri Ryan) is the Germs’ bassist. She joined the band after reading a flyer that called for “Two untalented girls who don’t know how to play their instruments to form a band.” She constantly supports Darby throughout the film, despite his drug problem.

as (born Georg Ruthenburg) is the Germs’ guitarist, and Darby’s closest friend. As classmates, Pat and Darby team up to form a band, despite having no experience playing musical instruments. Pat and Darby’s determination solidifies the band and the group quickly becomes an iconic fixture in the LA punk scene.

as (born Jimmy Giorsetti) is the drummer for The Germs. Don drove from his hometown of Phoenix, Arizona to audition for the band and is quickly invited to become a member. Don is later replaced by Darby’s close friend, Rob Henley played by Ashton Holmes. However, Don is invited to reunite with the group to perform in the band’s farewell show.

Inspired by ' "" and the punk rock scene of Los Angeles, AFI Film School graduate and LA native, Rodger Grossman, set out to create an authentic story about the formative years of The Germs.

Although The Germs project experienced several setbacks and false starts over a nine-year period, Grossman stayed committed to the film and ultimately cast Shane West as Darby Crash. West’s strong connection to the material, along with his own experience as the lead singer of a punk band, convinced Grossman to choose West over many other contenders. Grossman cast Bjiou Phillips, who was seventeen years old at the time, to play Lorna Doom. Phillips stayed committed to the project for the entire time it took to bring the film into production.

Pat Smear (the original guitar player in the band), who ultimately became a member of Nirvana, the Foo Fighters and many other bands, was the music producer for the film. With the exception of Phillips, who played guitar (but not bass guitar), and West, who had experience as a singer, none of the other cast members had ever played musical instruments. Intent on making the music in his film sound authentic, Grossman asked Smear to help his actors learn to play their instruments. Smear rehearsed with the band and produced all the pre-recordings that were used in the movie, utilizing the other original members of the Germs, Bolles and Doom. The new band of actors slowly came together. Pat Smear said: "These kids will be as good as we were when we were bad…which is good enough." Smear went on to affectionately refer to the cast as the "Baby Germs." The music in the film was recorded during pre-production, used by the cast as synch tracks during production, and finally married with West’s live vocals, which were recorded on-set. Pat Smear also produced the recordings of the other bands that perform in the movie -- the performed as , and The Bronx performed as Black Flag. [ [http://www.billboard.com/bbcom/news/article_display.jsp?vnu_content_id=1001017612 Billboard Article About the Film] ]

The film was shot on location in , primarily at Occidental Studios, where and once made movies. The film was shot guerrilla-style in a total of twenty-one days and in three production periods over a two year period.

All wardrobe and makeup was supervised by , a friend of Darby’s, to ensure authenticity.

Grossman used multiple camera positions to convey the significance of the band in relation to the audience. For example, in a scene depicting one of the band’s first shows, the camera looks down on Darby, suggesting the lackluster effect that the band had on the audience. As the film progresses, Grossman changes the camera’s position to make the stage higher relative to the audience, illustrating the control Darby had over his audience.

After a stressful false start in production, the cast and crew held a wrap party to celebrate the un-shot film. At the party the actors who portrayed the band (the Baby Germs) entertained the crew by playing a few of The Germs’ tracks on stage. Then the original Germs, who were in attendance, joined the Baby Germs on stage. The Baby Germs handed their instruments over to the original Germs, who continued to jam with West on vocals. The result was an unexpected Germs reunion with Shane West as front man. [ [http://www.nytimes.com/2008/08/03/movies/03spit.html?ex=1375934400&en=e0a8cb6e59833c3e&ei=5124&partner=permalink&exprod=permalink A Phoenix of a Film Exhumes a Punk Prince - NY Times] ]