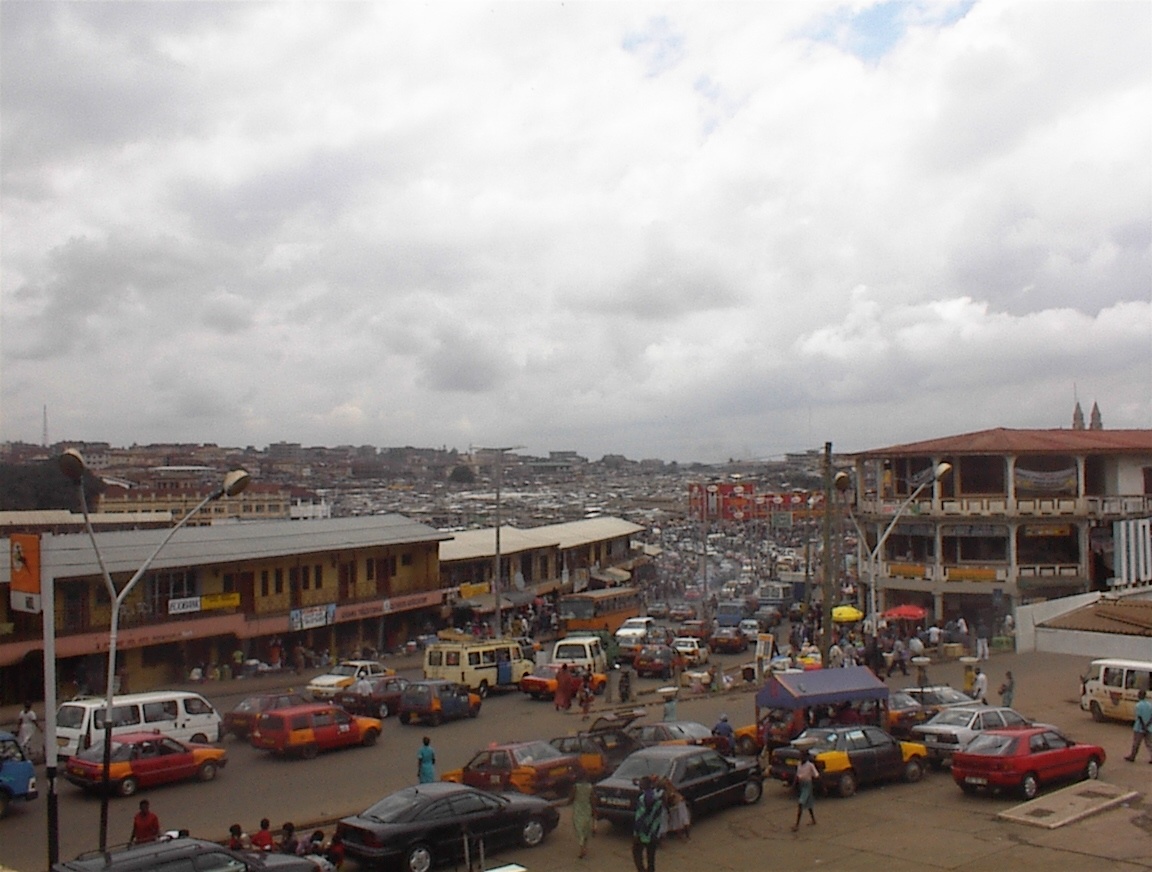 Kumasi is a in southern central . It is located near the , in the Rain Forest Region about 250 km (by road) northwest of . Kumasi is approximately 300 miles north of the Equator and 100 miles north of the Gulf of Guinea. It is popularly known as "The Garden City" or "heart beat" of Ghana because of its many beautiful species of flowers and plants.

With a population of 1,517,000 [2005, source: [http://esa.un.org/unup/ United Nations Population Division] ] , Kumasi is the second-largest city in the country. The largest ethnic group is the Ashanti, but other ethnic groups are growing in size. Approximately 80% of the population is and 20% , with a smaller number of adherents to traditional beliefs. It is an diocesan and archdiocesan see.

There is evidence that the area around Kumasi has been kept cleared since the age.

The city rose to prominence in 1695 when it became capital of the due to the activities of its ruler . The ruler of Kumasi, known as the , also served as ruler of the Confederacy. With their 1701 victory over Denkyira the Asante confederacy became the primary state among the speaking peoples. [McCaskie, T. C. "Denkyira in the Making of Asante" in "The Journal of African History" vol. 48 (2007) no. 1, p. 1]

Parts of the city, including the Royal Palace, were destroyed by British troops in the Fourth Anglo-Ashanti War of 1874. It remains a royal city, although since all of Ghana was declared independent in 1957, the role of king has been mainly symbolic. The city holds an important place in the history of the Ashanti people, as legend claims that it was here received the Golden stool, an embodiment of the soul of the Asanti nation.

Due to large deposits that have been mined in the area, Kumasi has been among the wealthier cities in Ghana. The city's major exports are and . Kumasi has 50% of the timber industry in Ghana, with more than 4,000 employed in the business. The plays an important role in industry in the area. The is based there and is listed on the .

Features of the city include the large , , (built by the British in 1896 to replace an Asante fort and now a museum) and the . Royal Asante attractions include the (including the with various Asante including a reproduction of the golden stool), the , the (built in 1972), and the , dating from 1925, now a .

Kumasi is also home to a , and to the (formerly the "Kumasi College of Technology").

The city's most famous son is the former , . The local team, the Kumasi Asante Kotoko has won several national and continental awards. Their stadium was built in 1959, renovated in 1978, and again in 2007 with a seating capacity of 40,000 [http://www.thestatesmanonline.com/pages/news_detail.php?newsid=3938&section=3] .

Please note that, the information on festivals for Kumasi is misleading. Homowo is a festival celebrated by the gas and not Ashantis. All the information given are true for Accra and not Kumasi. Rather the Ashantis celebrates Akwasidee.

Homowo is an annual festival which celebrated by the Gaspeaking people. It is said to be originated during a period of "great famine which was eventually followed by a bumper harvest of grain and fish" (Wiafe, New Internationalist). The word literally means "hooting at hunger". [Wiafe, Samuel. "Hooting At Hunger: There's a Festival in Ghana Where You Can Find a Spouse, Race a Bicycle … and Even End Up More Optimistic Than You Began …." New Internationalist (1999). 2 May 2008 ]

Leading up to the festival, Kumasi faces several restrictionssuch as no loud music, no drumming, no whistling after dark, and no eating yam. [Witcombe. "The Odwira Festival." Trave Journal (2005). 2 May 2008 ]

On Monday, the starting week of the festival, men from three royal families in the village swipes the path between the "ancestral burial grounds and the town" (travel journal.com)

On early Tuesday morning, the restrictions placed on Kumasi are lifted. In the Tuesday afternoon, the entire town line up in the streets and "cheers and screams" [Witcombe. "The Odwira Festival." Travel Journal (2005). 2 May 2008 ] as male members of royal family return, who departed in earlier morning to a walk to the sacred burial site of the ancestors in order to ask for permission for the festival to begin. (Traveljournals.net)

Please note that, the information on festivals for Kumasi is misleading. Homowo is a festival celebrated by the gas and not Ashantis. All the information given are true for Accra and not Kumasi. Rather the Ashantis celebrates Akwasidee

Kumasi is served by and lines to and . Because of the barrier mountain range just to the north, the rail system does not yet go further to the north.

Public transit in the city is provided by a mix of privately owned Mini-buses (known as Tro-Tros), taxis and buses. Tro-Tros are usually converted Mini-buses that run a regular, well-known route. They are cheap and frequent but often in poor repair and over-crowded. Some taxis also run regular routes, which cost more but provide for a more comfortable ride. Recently in 2002, the city introduced metro bus services, which were initially met with skepticism by commuters, but have increased in popularity.