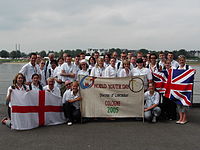 It is in the province of Liverpool. It extends along the west of England from the Ribble River in the south of Preston to the Scottish border, comprising the counties of Cumbria and much of Lancashire. The diocese was erected in 1924, taking areas and parishes from the Archdiocese of Liverpool and the Diocese of Hexham and Newcastle. The current Bishop of Lancaster is the Right Reverend Bishop Michael Gregory Campbell OSA, who is resident at the Cathedral in Lancaster. The emeritus bishop is The Right Rev Patrick O'Donoghue. The diocese has around 90 active priests, 50 permanent deacons, 12 secondary schools, over a hundred primary schools and a similar number of parishes.

Areas in the diocese include the city of Preston; a city with an uncharacteristically high Catholic population - the highest anywhere in England & Wales in fact, due in no small part to the fact that the Protestant Reformation never took hold in Preston to the same extent as it did in other places. Also notable in the diocese are: the Lake district, Sellafield nuclear power station, and towns and cities including Carlisle, Lancaster, Blackpool, Whitehaven, Workington, Barrow-in-Furness, the major shipbuilding town.

Central organisations of the diocese include the residential youth centre Castlerigg Manor, the Diocesan Youth Service, the Education Centre, Catholic Caring Services and others including the monthly diocesan newspaper, The Voice. There are also many other committees, societies and other informal organisations in the diocese.

Since the erection of the Diocese in 1924, there have been six bishops. The longest serving Bishop was the third (Brian Charles Foley), who served from 1962 until 1985. The current incumbent is Bishop Michael Gregory Campbell. Bishop Campbell was installed on 1 May 2009 following the retirement of Bishop Patrick O'Donoghue. 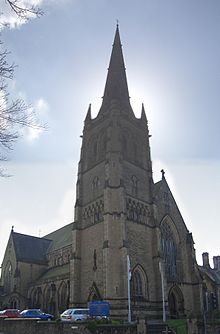 A composite photo of Lancaster Cathedral from the northwest

St. Peter's Cathedral on Balmoral Road, Lancaster, is the diocesan cathedral and the seat of the Bishop of Lancaster. Completed in 1859 as a parish Church of the Archdiocese of Liverpool, and raised to the status of a cathedral upon the establishment of the diocese in 1924, St. Peter's is a functioning parish. In addition, its grounds host numerous diocesan offices, including the Bishops Office, Finance Office and the Diocesan Youth Service.

For further details about the Cathedral, please see the detailed article on the subject.