Built in the 1920s and designated in 1955, I-680 begins at a junction with I-280 and US 101 (Bayshore Freeway), and heads northeast and north-northwest through the northeast part of San Jose. After passing SR 237 in Milpitas and SR 262 in Fremont, I-680 abruptly turns northeast (where a connection to a SR 238 freeway was planned) and enters a hilly area. The highway crosses over Mission Pass, also known as the Sunol Grade, and descends into the Sunol Valley, where it meets SR 84 near Sunol. From Sunol, I-680 again heads north-northwesterly through valleys, including the San Ramon Valley, along the Calaveras Fault. Junctions along this portion include I-580 in Dublin and SR 24 in Walnut Creek. Beyond the latter interchange, a three-way directional junction with the SR 24 freeway west to Oakland, I-680 heads north into Pleasant Hill, where SR 242 splits and I-680 again heads northwesterly. After the junction with SR 4 in Martinez, the highway crosses the Carquinez Strait on the Benicia-Martinez Bridge, immediately meeting the east end of I-780 on the Benicia end. The remainder of I-680, from Benicia to I-80 at Cordelia, lies between a hilly area to the west and a marshy area (along the Suisun Bay and Cordelia Slough) to the east.[2]

I-680 is part of the State Scenic Highway System from SR 238 in Fremont north to SR 24 in Walnut Creek,[3] and is eligible for said system from SR 238 south to the Alameda-Santa Clara County line.

The portion of this route from the Route 280/US101 junction to the Santa Clara/Alameda County line is named the Joseph P. Sinclair Freeway, after the District Engineer for District 4 Division of Highways (now Caltrans) from 1952 to 1964 pursuant to Assembly Concurrent Resolution 104, chapter 168 in 1967.

Between Alcosta Boulevard and the intersection with I-580 , I-680 is officially named the "Officer John Paul Monego Memorial Freeway." It was named after Dublin Police Officer John Paul Monego, who died on December 12, 1998, in the line of duty at the age of 33 years, while responding to a takeover robbery. Named by Senate Concurrent Resolution 60, enrolled August 18, 2000.[1]

From Route 24 to Route 4, the route is historically part of "El Camino Sierra" (The Road to the Mountains).[1]

The portion of this route from about the Livorna Road interchange in Walnut Creek/Alamo to the Alcosta Blvd. interchange in San Ramon appears to be named the "Donald D. Doyle Highway".[1] While serving in the California Assembly from 1953 to 1958, Donald D. Doyle co-authored the Short-Doyle Mental Health Act and authored legislation creating the ferry boat transportation system between Benecia and Martinez. The signs indicating this were erected in 1998.

Of the above names, only the name Sinclair Freeway for its designated portion usually appears on maps, and the other portions on maps are always unnamed, referred to as simply I-680.[4]

The route begins at U.S. Route 101, where it acts as a continuation of Interstate 280 eastward.[5] From here, it begins its journey northward through San Jose, where it meets the Capitol Expressway, signed as County Route G21.[1] The next exit northbound is State Route 130, which is also known as Alum Rock Avenue. As it continues through Santa Clara County, it meets numerous local roads before interchanging with the Montague Expressway. Here, it exits San Jose and enters the city of Milpitas, California, where it meets State Route 237, often referred to as Calaveras Boulevard. After one more intersection, I-680 exits Santa Clara County and enters Alameda County.[1]

In Alameda County, the freeway instantly begins in the city of Fremont, where it intersects State Route 262. Continuing through the city, it meets Mission Boulevard at State Route 238 before exiting the city. Amid Alameda County, it abruptly turns northeastward and enters a hilly area, where it crosses over Mission Pass, and descends into the Sunol Valley, where it joins State Route 84 for a short while. Afterwards, it enters Pleasanton and interchanges with Interstate 580. It enters Dublin for a short segment before exiting the county and entering Contra Costa County.[1][5]

In the wake of the September 11 Attacks, a flag was painted on a large piece of concrete on a hill along the Sunol Grade. It stayed there for nine years before being painted over, as the mural had been painted without authorization. Due to this action being taken shortly before the 4th of July, and also due to the mural's fame, this was met with controversy. The flag was replaced shortly later.

By the 1920s, a road ran south from Martinez through Walnut Creek, Dublin, Danville, and Sunol to Mission San Jose, where it met State Highway Route 5 (Mission Boulevard, signed over the years as US 48, US 101E, SR 9, and now SR 238). It was not yet paved south of Dublin, where it crossed Mission Pass between the Sunol Valley and the San Francisco Bay basin.[4] The majority of this roadway was added to the state highway system in 1933 as portions of several routes: Route 108 from Mission San Jose to Sunol, Route 107 from Sunol to Walnut Creek, and Route 75 from Walnut Creek to Pleasant Hill.[6][7]

At Martinez, the Martinez-Benicia Ferry took automobiles across the Carquinez Strait to Benicia, where Route 7, one of the original state highways from the 1910 bond issue, led north and northeast past Cordelia towards Sacramento and Oregon.[8] The portion north from Benicia to Cordelia became part of Route 74 in 1935, when Route 7 was realigned to the more direct American Canyon route that is now I-80.[9] None of the aforementioned roads were given state sign route numbers in 1934, when that system was laid out,[10] but by 1937 they had been numbered State Route 21.[11] This route began at the intersection of Warm Springs Boulevard and Brown Road in Warm Springs, where Route 5 and Route 69 (SR 17) split, follewed Route 5 along Mission Boulevard to Mission San Jose (this part later became an overlap with SR 9), and then continued to US 40 (Route 7) at Cordelia. The routing was very close to the present I-680, following such roads as Pleasanton Sunol Road, San Ramon Valley Boulevard, Danville Boulevard, and Pacheco Boulevard.[12]

The portion of SR 21 between Pleasant Hill and Martinez was finally added to the state highway system in 1949, as a branch of Route 75.[13] The ferry approach in Benicia became a spur of Route 74 in 1947,[14] and in 1953 it was transferred to Route 75. The same law, effective immediately as an urgency measure, authorized the Department of Public Works to acquire the ferry system, then operated by the city of Martinez, which was planning to shut it down.[15] Ownership was transferred just after midnight on October 6, 1953.[16] 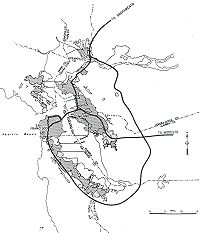 1955 map of the planned Interstates in the San Francisco Bay Area. These early plans essentially called for a interstate loop route that would head south down the San Francisco Peninsula from San Francisco to San Jose, then head north through the eastern cities of the East Bay to Vallejo. This route now basically comprises present-day I-280, I-680, and I-780.

The Bureau of Public Roads approved urban routes of the Interstate Highway System on September 15, 1955, including a loop around the San Francisco Bay, soon numbered I-280 and I-680. The east half (I-680) began at the interchange of US 101 north of downtown San Jose and followed the Nimitz Freeway (SR 17/Route 69, now I-880) to the split at Warm Springs (the present location of SR 262), SR 21 to Benicia, and Route 74 (no sign route number) to I-80 in Vallejo.[17][18][19] The first piece of I-680 freeway built, other than the pre-existing Nimitz Freeway, was in the late 1950s, along the SR 24 overlap between North Main Street in Walnut Creek and Monument Boulevard in Pleasant Hill.[20][21] A southerly extension, bypassing downtown Walnut Creek to South Main Street, opened on March 22, 1960, connecting with the SR 24 freeway to Oakland.[22] In the next decade, the freeway was completed from Vallejo south to SR 238 at Mission San Jose, and the roadway north from Benicia to Cordelia, which became the only remaining piece of SR 21, was also upgraded to freeway standards.[23][24]

In the 1964 renumbering, the legislative designation was changed to Route 680. SR 17 was officially moved to former Route 5 between San Jose and Warm Springs, which had not had a signed designation since the Nimitz Freeway (then I-680) was constructed,[25] but this was instead marked as part of SR 238 (which replaced SR 9 north of Mission San Jose), and SR 17 remained signed along the Nimitz Freeway.[26] This was very short-lived, as the Bureau of Public Roads approved a shift in the south end of I-680 in October 1964.[18] The legislature changed the routes in 1965, swapping Routes 17 and 680 south of Warm Springs, and creating a new SR 262 on the short roadway at Warm Springs where they had overlapped to switch sides.[27][28] However, until I-680 was completed in the early-to-mid 1970s,[23] it remained signed along the Nimitz Freeway, and the old road between San Jose and Warm Springs continued to be marked as SR 238.[24] One more change was made to the routing of I-680: in July 1973, the remainder of SR 21, from Benicia to Cordelia, was added to the Interstate Highway System. This became the new alignment of I-680, and the old route to Vallejo became I-780. The corresponding changes were made by the state legislature in 1976.[29]

A 14-mile (23 km) southbound high-occupancy toll (HOT) lane along I-680 between SR 84 in Alameda County and SR 237 in Santa Clara County opened on September 20, 2010.[30] Solo drivers are required to pay a toll via a FasTrak transponder. There are currently no plans to add northbound HOT lanes on I-680, however.