Blue Man Group is an organization founded by Chris Wink, Matt Goldman and Phil Stanton. The organization produces theatrical shows and concerts featuring popular music, comedy and multimedia; recorded music and scores for film and television; television appearances for shows such as The Tonight Show, Las Vegas, Scrubs, FETCH! with Ruff Ruffman, and Arrested Development; and a children's museum exhibit ("Making Waves").[1] All of the organization's appearances star a trio of performers called Blue Men, who all wear a blue "skin". The original founding Blue Men still perform, but they have since then taken on administrative roles in the company. Because of the success of Blue Man Group, a parent company called Blue Man Productions was created, which produces all the Blue Man Group shows in the world. It currently has a staff of over 50 people.

Wink and Goldman had become friends when they bonded as the "new kids" in a Manhattan (New York City) junior high school. In college, however, the two went separate ways: Wink to Wesleyan University in Middletown, Connecticut and Goldman to Clark University in Worcester, Massachusetts. After college in 1984, Wink and Goldman reunited in NYC and later, in 1986, met Stanton, a recent transplant from Savannah, Georgia. Formed in 1987 by Goldman, Stanton, and Wink, The Blue Man Group played around Manhattan in such venues as Central Park, the Performing Garage, Dixon Place and PS 122.[2][3] It is not clear how much influence the Brazilian band Uakti had on the founders, although Uakti's Marco Antônio Guimarães had been building tuned PVC instruments (struck with foam paddles) since the late 1970s. Uakti was introduced to US audiences just about the same time as Blue Man Group was forming, through Paul Simon, The Manhattan Transfer and composer Philip Glass.[4] 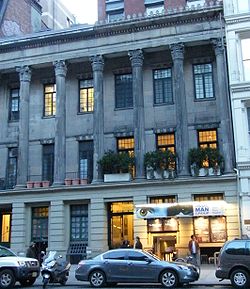 Astor Place Theatre with marquee for the group

Meryl Vladimer, the Artistic Director of The CLUB @ La MaMa, saw their work as part of a variety show hosted by the Alien Comic (Tom Murrin) and commissioned Blue Man Group to create a full-length show. The resulting piece, Tubes, took off after Vladimer persuaded New York Times theater critic Stephen Holden to review it. Blue Man Group's popularity continued to snowball, resulting in a performance at Lincoln Center titled "Serious Fun", and eventually an Obie Award and a Lucille Lortel Award, which led producers to take the show to off-Broadway. Tubes opened in 1991 at the Astor Place Theater in New York City.[5][6]

Blue Man Group won a special citation in the 1990-1991 Village Voice Obie Awards,[7] and a special award in the 1992 Lucille Lortel Awards, which are for excellence in off-Broadway theatre.[8]

Early in the history of the group, the members would speak with audiences after the show while still in makeup, answering questions, signing autographs, and talking about the show.[citation needed] Eventually, however, it was decided that cast members would stay in character at all times while in makeup, meaning after shows they would still not speak to audience members, and the only "autograph" they would sign would be a smudge of blue paint. When shown a "new" piece of technology, such as a cell phone or even an old pair of binoculars, they will simply stare at it in wonder.[citation needed]

Blue Man Group is in the midst of an International Blue Man Theatrical Tour. This tour started in Stuttgart, proceeded to Basel, Zürich, and Vienna, and will eventually go to Spain, France, and the Netherlands for approximately two to six month runs in each location.

In 1999, the group released their first audio recording, appropriately titled Audio. Although it contained some of the music from their stage productions, it was less of a soundtrack and more a collection of full-length instrumentals that featured new instruments.

In 2002, the group participated in Moby's Area2 tour, giving a more rock-oriented performance than in the theatrical shows. Songs developed during this tour appeared on 2003's album The Complex.

Unlike Audio, The Complex featured a variety of vocalists and guests including Tracy Bonham, Dave Matthews, Gavin Rossdale and Venus Hum. The record spawned its own 2003 tour, the first headlined by Blue Man Group. The tour deconstructed the traditional rock concert experience into its often clichéd parts and was chronicled in a 2004 DVD release. The tour featured Tracy Bonham and Venus Hum as supporting acts. The DVD included a surround sound mix of some of the studio recordings.

Blue Man Group launched its second tour, The "How to Be a Megastar Tour 2.0", on September 26, 2006. The tour added some new material to material from the original Complex Rock Tour, and had Tracy Bonham as an opening act and vocalist. DJ/VJ Mike Relm was the opening act for the second leg of this tour, which ended April 22, 2007 in Wilkes-Barre, PA. This third leg of the tour began in May 2007 and included performances in Mexico City, Guadalajara, and Monterrey, Mexico; Buenos Aires, Argentina; Sao Paulo and Rio de Janeiro, Brazil; and Santiago, Chile. The fourth leg, using "2.1" in its title, included more U.S. and Canada dates. Following that, the Megastar World Tour visited France, Korea, Canada, Germany, and a few other European countries throughout 2008.

The "How to Be a Megastar Tour 2.0" visited Taipei, Taiwan from August 19 to 23 as part of a promotional campaign for the 2009 Summer Deaflympics in Taipei, most of the show's dialogue displayed with subtitle. As Typhoon Morakot hit the island and caused serious damage in mid August, the group agreed to perform one extra show with the proceeds being donated to the victims of the flood.

There are a number of different themes found in various Blue Man performances. These themes include:[15]

The Rock Concert Instruction Manual, used by Blue Man Group in The Complex Rock Tour and the How to Be a MegaStar Tours 2.0 and 2.1, is a satire of the conventions of rock music. Before the manual appears, a fake infomercial for it by "Rodco" (played by Fred Armisen) plays. The manual describes in simple steps how one can gain fame and fortune by becoming a rock star. Parts of the manual are also used in Blue Man Group's theatrical shows.

The Rock Concert Instruction Manual is bought at the beginning of the How to Be a MegaStar show from a fake infomercial (played by Fred Armisen), using an audience member's credit card. $4,000 is supposedly charged to it.[citation needed](In compensation, the audience member later receives a marshmallow sculpture that was in one Blue Man's mouth). The Manual is narrated by a monotone male voice (Todd Perlmutter) who directs their actions step-by-step, from creating their persona to ending the show.[citation needed]

In September 2008, Variety reported that the original trio (Matt Goldman, Chris Wink and Phil Stanton) would star in a Blue Man Group IMAX 3D feature film, to be produced by Charlotte Huggins.[16] The film, titled Blue Man Group: Mind Blast, will be directed by David Russo, and will be released by National Geographic Entertainment.[17] The group's website confirms that the film should arrive in theaters in 2011.[18]

Blue Man Group is largely a non-union organization. There have been union organizing efforts at shows in Toronto and Las Vegas, however the show is no longer performed in Toronto.[17]

In September 2005, Blue Man Group moved from Luxor Hotel and Casino, where they operated under the hotel’s union contract, to The Venetian Hotel and Casino, where there was not a union contract in place. Stagehands at the Venetian started an organizing campaign with the International Alliance of Theatrical Stage Employees in Las Vegas, leading to a vote in May 2006. Before the vote, Matt Goldman, a co-founder of Blue Man Group, pledged to honor the results "in accordance with the great democratic traditions of our country."[19]

In the May 2006 election, the stagehands voted to be represented by IATSE Local 720. In June the National Labor Relations Board certified the results. The winning election permitted the employees to start bargaining a contract with Blue Man Group. After the election, Blue Man Group refused to negotiate, arguing that the election was not valid because it did not include a half-dozen musical technicians who repair and maintain the show’s unusual musical instruments.[20]

In June, the union filed an unfair labor practice charge with the regional office of the National Labor Relations Board. The NLRB sided with the union. The company filed a challenge, sending the case to the full Board in Washington DC. In September 2006 the NLRB rejected the challenge, ordering bargaining to begin.[17]

In September 2006, Blue Man Group filed a petition for review of the NLRB’s order in the United States Court of Appeals for the District of Columbia Circuit. Blue Man Group argued that the musical technicians, who work side by side with the stage crew, should have been included in the bargaining unit and, for this reason, the NLRB’s election and resulting certification of Local 720 as the bargaining representative were invalid. In October, the NLRB filed a cross-petition for enforcement of its order.[31] (D.C. Cir. Nos. 06-1328 & 06-1341 NLRB v. Blue Man Vegas, LLC Board Case Nos. 28-CA-20868 and 28-RC-6440).[21]

On June 10, 2008, the United States Court of Appeals for the District of Columbia Circuit ruled in favor of the NLRB and denied Blue Man Group’s petition for review.[21] Following this decision upholding the election, Blue Man Group and the Union promptly began negotiations for a collective bargaining agreement.

Singles
"The Current" · "I Feel Love" · "Rods and Cones"
Video releases
The Complex Rock Tour Live · How to Be a Megastar Live!
Other
Sharp Aquos Theatre · LIVE at Luxor
Categories: