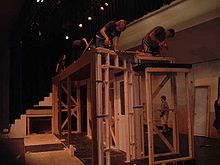 Carpenters work on constructing the set

Set construction is the process by which a set designer works in collaboration with the director of a production to create the set for a theatrical, film or television production. The set designer produces a scale model, scale drawings, paint elevations (a scale painting supplied to the scenic painter of each element that requires painting), and research about props, textures, and so on. Scale drawings typically include a groundplan, elevation, and section of the complete set, as well as more detailed drawings of individual scenic elements which, in theatrical productions, may be static, flown, or built onto scenery wagons. Models and paint elevations are frequently hand-produced, though in recent years, many designers and most commercial theatres have begun producing scale drawings with the aid of computer drafting programs such as AutoCAD or Vectorworks.

In theater, the technical director or production manager is the person responsible for evaluating the finished designs and considering budget and time limitations. He or she engineers the scenery, has it redrafted for building, budgets time, crew and materials, and liaisons between the designer and the shop. Technical directors often have assistant technical directors whose duties can range from drafting to actually building scenery.

A scene shop is often overseen by a shop foreman or master carpenter. This person assigns tasks, does direct supervision of carpenters, and deals with day-to-day matters such as absences, breaks, tool repair, etc. The staff of a scene shop is usually referred to as scenic carpenters, but within that there are many specialities such as plasterers, welders, and scenic stitchers. Scenic painting is a separate aspect of scenic construction, although the scenic painter usually answers to the technical director.

There is also usually another person often referred to as a jack of all trades, or as a Fred-John. He or she doesn't specialize in a particular aspect of construction, but is skilled to some degree in most.