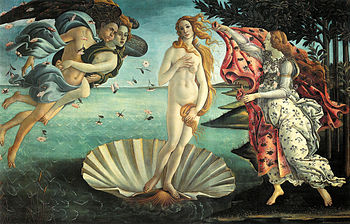 Venus (Latin: [ˈwɛnʊs]) is a Roman goddess principally associated with love, beauty and fertility, who played a key role in many Roman religious festivals and myths. From the third century BC, the increasing Hellenization of Roman upper classes identified her as the equivalent of the Greek goddess Aphrodite.

The noun form venus means "love" and "sexual desire" in Latin,[1] and has connections to venerari (to honour, to try to please) and venia (grace, favour) through a possible common root in an Indo-European *wenes-, comparable to Sanskrit vanas- "lust, desire".[2][3]

Venus' name might embody the function of honours and gifts to the divine when seeking their favours: such acts can be interpreted as the enticement, seduction or charm of gods by mortals.[4][5] The ambivalence of this function is suggested in the etymological relationship of the root *venes- with Latin venenum (poison, venom), in the sense of "a charm, magic philtre".[6]

Due to her early association with Aphrodite in the interpretatio graeca, it is hard to establish what characteristics the natively Italic Venus may have had. Ushas is linked to Venus by a Vedic Sanskrit epithet ascribed to her, vanas- "(female) loveliness; longing, desire", which is cognate with Latin Venus (Proto-Indo-European root *wen- "to desire").[7]

In the interpretatio romana of the Germanic pantheon during the early centuries AD, Venus became identified with the Germanic goddess Frijjo, giving rise to the loan translation "Friday" for dies Veneris. The historical cognate of the dawn goddess in Germanic tradition, however, would be Ostara.

For more details on this topic, see Aphrodite.

Venus was commonly associated with the Greek goddess Aphrodite and the Etruscan deity Turan, borrowing aspects from each. As with most other gods and goddesses in Roman mythology, the literary concept of Venus is mantled in whole-cloth borrowings from the literary Greek mythology of her equivalent counterpart, Aphrodite. The early, Etruscan or Latin goddess of vegetation and gardens became deliberately associated with the Greek Goddess Aphrodite.[8] In some Latin mythology Cupid was the son of Venus and Mars, the god of war. In other times, Venus was understood to be the consort of Vulcan. Virgil, in compliment to his patron Augustus and the gens Julia, made Venus, whom Julius Caesar had adopted as his protectress, the ancestor of the Roman people by way of its legendary founder Aeneas and his son Iulus.

Her cult began in Ardea and Lavinium, Latium. On August 15, 293 BC, her oldest known temple was dedicated, and August 18 became a festival called the Vinalia Rustica. After Rome's defeat at the Battle of Lake Trasimene in the opening episodes of the Second Punic War, the Sibylline oracle recommended the importation of the Sicillian Venus of Eryx; a temple to her was dedicated on the Capitoline Hill in 217 BC:[9] a second temple to her was dedicated in 181 BC.[10]

Venus seems to have played a part in household or private religion of some Romans. Julius Caesar claimed her as an ancestor (Venus Genetrix); possibly a long-standing family tradition, certainly one adopted as such by his heir Augustus. Venus statuettes have been found in quite ordinary household shrines (lararia). In fiction, Petronius places one among the Lares of the freedman Trimalchio's household shrine.[11]

Like other major Roman deities, Venus was ascribed a number of epithets that referred to her different cult aspects and roles.

Venus Acidalia was,[12] according to Servius, named after the well Acidalius near Orchomenus, in which Venus used to bathe with the Graces. Others connect the name with the Greek acides (άκιδες), meaning cares or troubles.[13]

Venus Calva ("Venus the bald one"), an image of the Goddess attested by post Classical Roman writings which offer several different Roman traditions to explain this appearance and epithet. One holds that it commemorates the virtuous offer by Roman matrons of their own hair to make bowstrings during a siege of Rome: another, that during the reign of king Ancus Marcius, the queen and others lost their hair during an epidemic. In hope of its restoration, women unaffected by the affliction willingly sacrificed their own hair to Venus.[14] Ashby (1929) finds the existence of a temple to her "very doubtful".[15]

Venus Cloacina ("Venus the Purifier"), was a fusion of Venus with the Etruscan water goddess Cloacina, likely resulting from a statue of Venus being prominent near the Cloaca Maxima, Rome's sewer system. The statue was erected on the spot where according to Rome's founding tradition, peace was made between the Romans and Sabines.

Venus Erycina ("Venus from Eryx"), also called Venus Ericina, originated on Erice, in western Sicily. Temples were erected to her on the Capitoline Hill and outside the Porta Collina. She embodied "impure" love, and was the patron goddess of prostitutes.

Venus Felix ("Lucky Venus") was an epithet used for a temple on the Esquiline Hill and for a temple constructed by Hadrian dedicated to "Venus Felix et Roma Aeterna" ("Favorable Venus and Eternal Rome") on the north side of the Via Sacra. This epithet is also used for a specific sculpture at the Vatican Museums.

Venus Genetrix ("Mother Venus") was Venus in her role as the ancestress of the Roman people, a goddess of motherhood and domesticity. A festival was held in her honor on September 26. As Venus was regarded as the mother of the Julian gens in particular, Julius Caesar dedicated a Temple of Venus Genetrix in Rome in 46 BC. This name has attached to an iconological type of statue of Aphrodite/Venus. 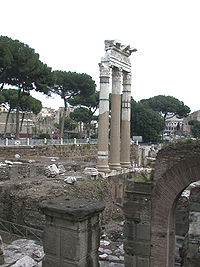 Venus Kallipygos ("Venus with the pretty bottom"), a form worshipped at Syracuse.

Venus Libertina ("Venus the Freedwoman") was an epithet of Venus that probably arose from an error, with Romans mistaking lubentina (possibly meaning "pleasurable" or "passionate") for libertina. Possibly related is Venus Libitina, also called Venus Libentina, Venus Libentia, Venus Lubentina, Venus Lubentini and Venus Lubentia, an epithet that probably arose from confusion between Libitina, a funeral goddess, and the aforementioned lubentina, leading to an amalgamation of Libitina and Venus. A temple was dedicated to Venus Libitina on the Esquiline Hill.

Venus Murcia ("Venus of the Myrtle") was an epithet that merged the goddess with the little-known deity Murcia or Murtia. Murcia was associated with the myrtle-tree, but in other sources was called a goddess of sloth and laziness.

Venus Obsequens ("Graceful Venus" or "Indulgent Venus") was an epithet to which a temple was dedicated in the late 3rd century BC during the Third Samnite War by Quintus Fabius Maximus Gurges. It was built with money fined from women who had been found guilty of adultery. It was the oldest temple of Venus in Rome, and was probably situated at the foot of the Aventine Hill near the Circus Maximus. Its dedication day, August 19, was celebrated in the Vinalia Rustica.

Venus Urania ("Heavenly Venus") was an epithet used as the title of a book by Basilius von Ramdohr, a relief by Pompeo Marchesi, and a painting by Christian Griepenkerl. (cf. Aphrodite Urania.)

On April 1, the Veneralia was celebrated in honor of Venus Verticordia ("Venus the Changer of Hearts"), the protector against vice. A temple to Venus Verticordia was built in Rome in 114 BC, and dedicated April 1, at the instruction of the Sibylline Books to atone for the inchastity of three Vestal Virgins.

Venus Victrix ("Venus the Victorious") was an aspect of the armed Aphrodite that Greeks had inherited from the East, where the goddess Ishtar "remained a goddess of war, and Venus could bring victory to a Sulla or a Caesar."[16] Pompey, Sulla's protege, vied with his patron and with Caesar for public recognition as her protege. In 55 BC he dedicated a temple to her at the top of his theater in the Campus Martius. She had a shrine on the Capitoline Hill, and festivals on August 12 and October 9. A sacrifice was annually dedicated to her on the latter date. In neo-classical art, her epithet as Victrix is often used in the sense of 'Venus Victorious over men's hearts' or in the context of the Judgement of Paris (e.g. Canova's Venus Victrix, a half-nude reclining portrait of Pauline Bonaparte).

Venus de Milo at the Louvre 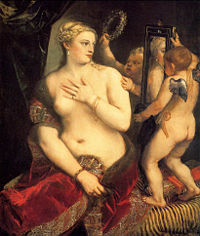 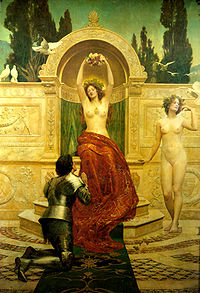 Tannhäuser in the Venusberg by John Collier, 1901: a gilded setting that is distinctly Italian quattrocento.

Roman and Hellenistic art produced many variations on the goddess, often based on the Praxitlean type Aphrodite of Cnidus. Many female nudes from this period of sculpture whose subjects are unknown are in modern art history conventionally called 'Venus'es, even if they originally may have portrayed a mortal woman rather than operated as a cult statue of the goddess.

In the field of prehistoric art, since the discovery in 1908 of the so-called "Venus of Willendorf" small Neolithic sculptures of rounded female forms have been conventionally referred to as Venus figurines. Although the name of the actual deity is not known, the knowing contrast between the obese and fertile cult figures and the classical conception of Venus has raised resistance to the terminology.

The medieval German legend Tannhäuser preserved the Venus myth long after her worship was extirpated by Christianity.

The German story tells of Tannhäuser, a knight and poet who found Venusberg, a mountain with caverns containing the subterranean home of Venus, and spent a year there worshipping the goddess. After leaving Venusberg, Tannhäuser is filled with remorse, and travels to Rome to ask Pope Urban IV if it is possible to be absolved of his sins.

Urban replies that forgiveness is as impossible as it would be for his papal staff to blossom. Three days after Tannhäuser's departure, Urban's staff blooms with flowers; messengers are sent to retrieve the knight, but he has already returned to Venusberg, never to be seen again.