A bent-over row (or barbell row) is a weight training exercise that targets a variety of back muscles. Which ones are targeted varies on form. The bent over row is often used for both bodybuilding and powerlifting. It is a good exercise for increasing strength and size. 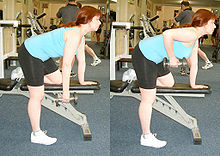 A one arm dumbbell bent-over row with a bench used as support.

There are several variants of this exercise, depending on whether dumbbells or a barbell is used:

The muscles emphasized in the pulling movement vary based on form:

Chances of being injured are increased when a lifter deviates from safer postures. Adopting a stable form and alignment can be difficult for many to learn. Being supervised by someone experienced in doing the lift can benefit beginners who would not be aware of unsafe postures. Some things that people do with the desire of safety are: