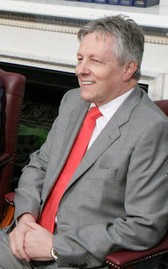 Peter David Robinson (born ) is a and is the current First Minister of Northern Ireland, since , and leader of the (DUP), since .

Robinson has been involved in Northern Irish politics for much of his adult life. He was elected in 1979 as Member of Parliament (MP) for the constituency of Belfast East. Following the re-establishment of devolution in Northern Ireland, Robinson was elected in 1998 as Member of the Legislative Assembly (MLA) for the Belfast constituency of Belfast East.

He won the DUP leadership election unopposed on . [ [http://www.belfasttelegraph.co.uk/news/local-national/article3611609.ece Belfast Telegraph] ] ; and subsequently became First Minister on following the resignation of First Minister on .

Peter Robinson was born in , the son of David McCrea Robinson and his wife Sheila Robinson.

Robinson attended , a in Belfast.

Robinson was educated at (now ), a single-sex in Belfast.

Between leaving college and beginning his political career he was an .

Robinson was General Secretary of the DUP between 1975 and 1979.

Robinson first stood in the election to the on in Belfast East. Although he started in fifth place, he failed to get elected being overtaken by his .

Robinson was selected as DUP candidate for Belfast East in the 1979 general election, a seat which previously had a big (UUP) majority.

He won the seat with a 19.9% swing to the DUP and a majority of 64, with Alliance Party leader 928 votes behind, unseating the MP former leader and UUP candidate William Craig on .

Robinson does not sit on any committees.

Robinson served on the from 1997 to [ [http://www.parliament.uk/parliamentary_committees/northern_ireland_affairs/niac_pn_1__05_06_.cfm UK Parliament] ] .

Along with UUP and DUP MPs Robinson resigned his seat in protest at the on and was re-elected in the subsequent .

Robinson is the longest serving Member of Parliament for any Belfast constituency since the Act of Union in 1800.

Robinson's electoral success was marked when he was elected Deputy Leader of the DUP in 1980.

Robinson was elected to the Northern Ireland Assembly for Belfast East on where he served as Chairman of the Environment Committee until it was dissolved in 1986.

Robinson was elected to the on and served in it until it completed its work in 1998. [ [http://www.ark.ac.uk/elections/ff96.htm ARK] ]

Member of the Legislative Assembly

Robinson was elected MLA for Belfast East in the Northern Ireland Assembly election on . [ [http://www.ark.ac.uk/elections/aeb.htm ARK] ]

Robinson was , which has overall responsibility for the (DRD), between to and to .

He was responsible for the introduction of free fares on for the and helped formulate the 25 year Regional Development Strategy for Northern Ireland and devised the 10 year Regional Transport Strategy.

Minister for Finance and Personnel

Robinson was , which has overall responsibility for the (DFP), from to June 2008.

Leadership of the Democratic Unionist Party

Robinson espouses a populist, statist form of Unionism. He is strongly in favour of and opposed to in the and the . Nonetheless, he is in favour of state intervention and socialist measures which are popular with his largely constituents.

While Deputy Leader of the DUP behind Ian Paisley he had a unique character and has an independent style. He is regarded as the leader of the urban, secular, working class wing of the DUP (as opposed to Paisley's rural, fundamentalist base), and the architect of the DUP's development in recent years of a slick electoral and media machine. He is also seen as a leader of the "" tendency within the DUP which acknowledges that it must at some point come to an accommodation with .

According to Robinson has voted on key issues since 2001 like this:

On , in protest at the , Robinson led a group of 500 loyalists into the town of in in the . The loyalists entered the Garda station in the town and physically assaulted two police officers, before holding a quasi-military parade in the town square. Robinson was later arrested. He pleaded guilty to and was fined IR£17500 in a court to escape a prison sentence. As a result, Robinson briefly resigned from the DUP deputy leadership [ [http://cain.ulst.ac.uk/othelem/chron/ch86.htm#Aug CAIN] ] . In a subsequent court appearance in he again led a large loyalist mob into the town which led to a riot [ [http://cain.ulst.ac.uk/heathwood/static/1986.html CAIN] ] . At his trial the judge described him as "a senior extremist politician." The event earned him the nickname "Peter the Punt" for a while.

In November 1986, he spoke at the demonstration which launched which collaborated with the and to procure arms. Robinson was photographed wearing the loyalist at an Ulster Resistance demonstration.

Robinson's character on the 's "" is portrayed as aggressive and constantly trying to get away from the - so-called "" image when he works with Martin McGuinness. [ [http://www.bbc.co.uk/northernireland/tv/programmes/folks/index.shtml Folks on the Hill] ] However it does not appear that he will escape a shared nickname as "" is catching on. [ [http://www.belfasttelegraph.co.uk/columnists/lindy-mcdowell/article3490714.ece Belfast Telegraph] ]

Peter married Iris Collins on and they have three children, Jonathan, Gareth and Rebekah.

has joined him as a , a MLA and a MP. They are the first husband and wife ever to represent constituencies in Parliament.On 6 June 2008 his wife Iris made comments on the 's Nolan Show calling for homosexuals to seek psychiatric counselling. During the broadcast she said "I have a very lovely psychiatrist who works with me in my offices and his Christian background is that he tries to help homosexuals - trying to turn away from what they are engaged in". She went on to say "I'm happy to put any homosexual in touch with this gentleman and I have met people who have turned around and become heterosexuals." Mrs Robinson claimed that homosexuality was an "abomination" and it made her feel "sick" and "nauseous". Mrs Robinson defended her views and denied prejudice against homosexuals, saying that "just as a murderer can be redeemed by the blood of Christ, so can a homosexual.... If anyone takes issue, they're taking issue with the word of God." [ [http://news.bbc.co.uk/1/hi/northern_ireland/7447850.stm BBC NEWS | Northern Ireland | Attack victim lambasts Robinson ] ] Her claims were rebuffed by , who said that homosexuality was not a psychiatric disorder.

At present, the are investigating the comments as a ,after receiving over 100 complaints from the public. [ [http://www.bbc.co.uk/blogs/ni/ethics/ BBC Will and Testament | William Crawley's broadcasting diary | Ethics ] ]

Robinson is a Pentecostal Christian and is a member of the , an Elim Pentecostal in Belfast.

Robinson keeps and cultures fish, ornamental domesticated varieties of the .