The change management process in systems engineering is the process of requesting, determining attainability, planning, implementing, and evaluating of changes to a system. It has two main goals: supporting the processing of changes – which is mainly discussed here – and enabling traceability of changes, which should be possible through proper execution of the process described here.[1]

There is considerable overlap and confusion between change management, change control and configuration management. The definition below does not yet integrate these areas.

Change management is an important process, because it can deliver vast benefits (by improving the system and thereby satisfying "customer needs"), but also enormous problems (by ruining the system and/or mixing up the change administration). Furthermore, at least for the Information Technology domain, more funds and work are put into system maintenance (which involves change management) than to the initial creation of a system.[2] Typical investment by organizations during initial implementation of large ERP systems is 15-20% of overall budget.

In the same vein, Hinley [3] describes two of Lehman’s laws of software evolution: the law of continuing change (i.e. systems that are used must change or automatically become less useful) and the law of increasing complexity (i.e. through changes the structure of a system becomes ever more complex and more resources are needed to simplify it).

The field of manufacturing is nowadays also confronted with many changes due to increasing and worldwide competition, technological advances and demanding customers.[4] Therefore, (efficient and effective) change management is also of great importance in this area.

It is not unthinkable that the above statements are true for other domains as well, because usually, systems tend to change and evolve as they are used. Below, a generic change management process and its deliverables are discussed, followed by some examples of instances of this process.

Notes: In the process below, it is arguable that the change committee should be responsible not only for accept/reject decisions, but also prioritization, which influences how change requests are batched for processing.

The process and its deliverables

For the description of the change management process, the meta-modeling technique is used. Figure 1 depicts the process-data diagram, which is explained in this section. 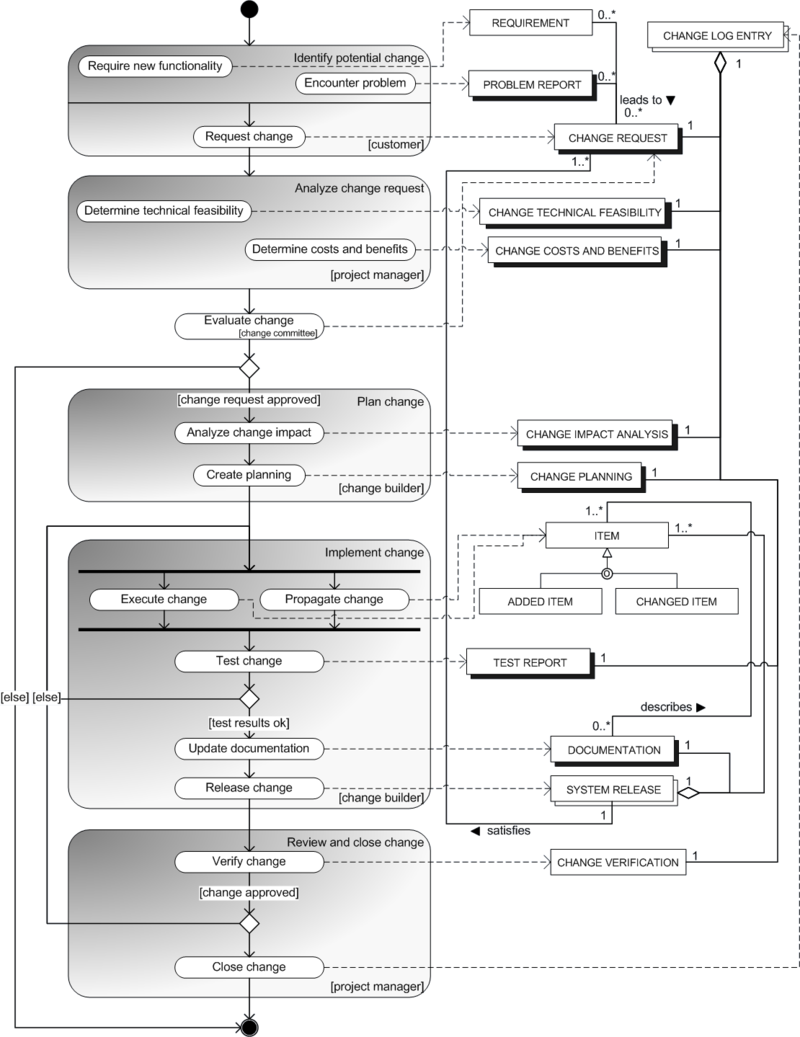 There are six main activities, which jointly form the change management process. They are: Identify potential change, Analyze change request, Evaluate change, Plan change, Implement change and Review and close change. These activities are executed by four different roles, which are discussed in Table 1. The activities (or their sub-activities, if applicable) themselves are described in Table 2.

Besides activities, the process-data diagram (Figure 1) also shows the deliverables of each activity, i.e. the data. These deliverables or concepts are described in Table 3; in this context, the most important concepts are: CHANGE REQUEST and CHANGE LOG ENTRY.

A few concepts are defined by the author (i.e. lack a reference), because either no (good) definitions could be found, or they are the obvious result of an activity. These concepts are marked with an asterisk (‘*’). Properties of concepts have been left out of the model, because most of them are trivial and the diagram could otherwise quickly become too complex. Furthermore, some concepts (e.g. CHANGE REQUEST, SYSTEM RELEASE) lend themselves for the versioning approach as proposed by Weerd [6], but this has also been left out due to diagram complexity constraints.

Besides just ‘changes’, one can also distinguish deviations and waivers.[7] A deviation is an authorization (or a request for it) to depart from a requirement of an item, prior to the creation of it. A waiver is essentially the same, but than during or after creation of the item. These two approaches can be viewed as minimalistic change management (i.e. no real solution to the problem at hand).

A good example of the change management process in action can be found in software development. Often users report bugs or desire new functionality from their software programs, which leads to a change request. The product software company then looks into the technical and economical feasibility of implementing this change and consequently it decides whether the change will actually be realized. If that indeed is the case, the change has to be planned, for example through the usage of function points. The actual execution of the change leads to the creation and/or alteration of software code and when this change is propagated it probably causes other code fragments to change as well. After the initial test results seem satisfactory, the documentation can be brought up to date and be released, together with the software. Finally, the project manager verifies the change and closes this entry in the change log. 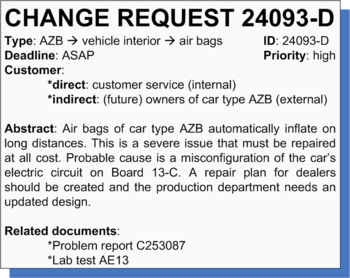 Another typical area for change management in the way it is treated here, is the manufacturing domain. Take for instance the design and production of a car. If for example the vehicle’s air bags are found to automatically fill with air after driving long distances, this will without a doubt lead to customer complaints (or hopefully problem reports during the testing phase). In turn, these produce a change request (see Figure 2 on the right), which will probably justify a change. Nevertheless, a – most likely simplistic – cost and benefit analysis has to be done, after which the change request can be approved. Following an analysis of the impact on the car design and production schedules, the planning for the implementation of the change can be created. According to this planning, the change can actually be realized, after which the new version of the car is hopefully thoroughly tested before it is released to the public.

Since complex processes can be very sensitive to even small changes, proper management of change to industrial facilities and processes is recognized as critical to safety. In the US, OSHA has regulations that govern how changes are to be made and documented. The main requirement is that a thorough review of a proposed change be performed by a multi-disciplinary team to ensure that as many possible viewpoints are used to minimize the chances of missing a hazard. In this context, change management is known as Management of Change, or MOC. It is just one of many components of Process Safety Management, section 1910.119(l).1