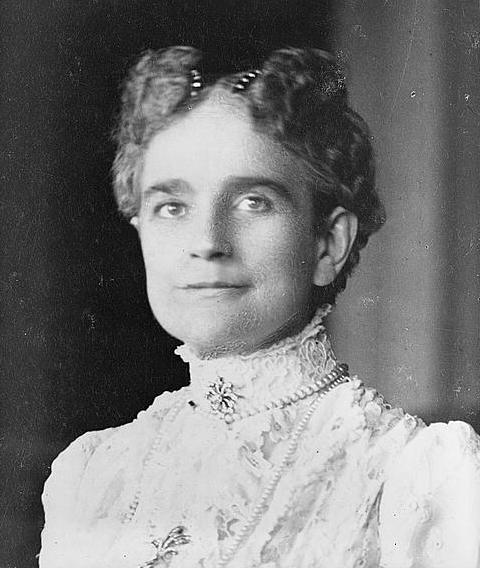 She was born in , the elder daughter of a prominent, well-to-do family. James A. Saxton, a banker, educated his daughters in local schools and a finishing school, and then sent them to .

At the , the McKinleys acted as if her health were no great handicap to her role as First Lady. Second Lady would often fill in for her. She received guests at formal receptions seated in a blue velvet chair. Contrary to protocol, she was seated beside the President at state dinners and he, as always, kept close watch for signs of an impending seizure. If necessary, he would cover her face with a large handkerchief for a moment. Guests were discreet and newspapers were silent on the subject of her "fainting spells." Only in recent years have the facts of her health been revealed.

After the President was shot by an assassin named Leon Czolgosz in in September 1901, he murmured to his secretary: "My wife &mdash; be careful, Cortelyou, how you tell her &mdash; oh, be careful." Following the President's death and his state funeral held in Washington, Mrs. KcKinley moved back to Canton and was cared for by her younger sister. She received condolences on her husband's assassination from around the world. The former First Lady visited her husband's grave almost daily. She died in 1907 at age 59, and lies entombed in a granite sarcophagus beside the President and near their two little daughters in Canton's .

Ida's childhood home, the Saxton House, has been preserved on Market Avenue in Canton. In addition to growing up in the house, she and her husband also lived there from 1878 - 1891, the period during which the future President McKinley served as one of Ohio's Congressional Representatives. The house was restored to its Victorian splendor and became part of the at its dedication in 1998.