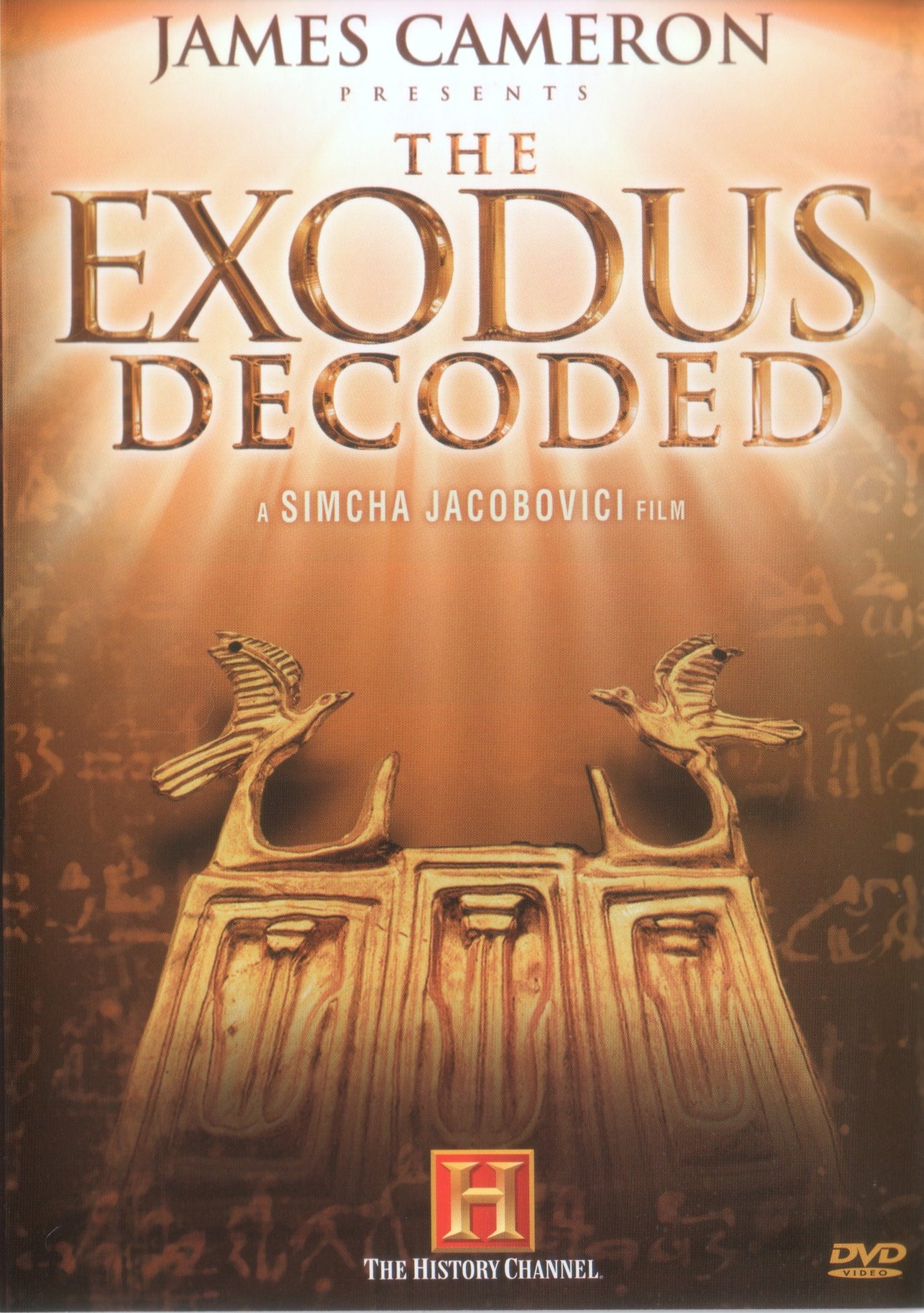 "The Ex­odus Decoded" is a documentary created by filmmaker and the producer/director . The documentary explores evidence for the account of . Its claims and methods were widely criticized both by Biblical scholars and mainstream scientists.

Jacobovici suggests that the Exodus took place around , during the reign of pharaoh , and that it coincided with the . In the documentary, the plagues that ravaged Egypt in the Bible are explained as having resulted from the eruption and a related in the . While much of Jacobovici's archaeological evidence for the Exodus comes from Egypt, some come from on mainland Greece, such as a certain gold ornament that may resemble the shape of the .

* The Hyksos Expulsion, contemporaneous Egyptian records of the driving out of the mysterious Semitic people. Jacobovici suggests that the Hyksos and the Hebrews were one and the same, a thesis he supports with Egyptian-style signet rings uncovered in the Hyksos capital of Avaris (30°47'14.71"N, 31°49'16.92"E) that read "Yakov/Yakub" (from "Yaqub-her"), similar to the Hebrew name of the Biblical patriarch (Ya'aqov).

* The , also called the Tempest Stele pieces of this stone tablet were unearthed in by Henri Chevalier in 1947.

* . Jacobovici suggests that the name of the Pharaoh at the time of the Exodus may have been a pun (). Jacobovici states that in Hebrew, the Egyptian name Ahmose would mean "Brother of Moses". Yet in Egyptian, 'Mose', 'Moses', 'Mes' etc. means 'son of' [A Structuralist Exercise: The Problem of Moses' Name Michael P. Carroll American Ethnologist, Vol. 12, No. 4 (Nov., 1985), pp. 775] and 'Ah' is a common part of Egyptian royal names referring to the moon god Iah. [Shaw, Ian, The Oxford History of Ancient Egypt, Oxford University Press, 2003, page 209] The documentary also examines the mummy of Ahmose's son, Sapair, who appears to have died at the age of twelve. In the Bible, the pharaoh loses a son to the Plague of the Firstborn.

* turquoise mine, a labour camp in the Sinai with a Semitic alphabetic inscription that reads "O El, save me from these mines." He argues that the use of "El" suggests that it was written before the alleged revelation at Sinai, supporting the thesis that Hebrews were enslaved in Egypt, although this inscription was undated.

* Gravestones. Jacobovici suggests that three of the stones marking the wealthy tombs of Grave Circle A in depict the parting of the . The stones, Jacoboici claims, show a man on a chariot in pursuit of a man on foot carrying a long, straight object. Jacobovici proposes that the man on the chariot is Ahmose I, the man on foot is Moses, and the long, straight object is the staff of Aaron. Above and below the scene are rows of swirls which, in the Jacobovici's interpretation, represent the parting waters. He admits, however, that archaeologists have typically interpreted the scene as a chariot race, with the long, straight object being a spear or sword.

* A ornament excavated from one of the tombs in the Grave Circle is believed by Jacobovici to show the against a background of the tabernacle altar. However, when you compare the photo of the gold ornament to the Biblical story of God telling Moses how to build the Ark, the descriptions differ in several ways. Jacobovici suggests that members of the may have emigrated to Mycenae after the Exodus. This, the documentary suggests, is why refers to the buried at Mycenae as "". The Greek myth states, however, that the Danaoi were descended from the ites under the matriarch .

Jacobovici suggests that the Biblical Exodus took place shortly after the eruption of Thera (now known as ), which is thought to have happened some time between 1650 BC and 1600 BC. The dates are disputed, depending on the use either of archaeological dating results (1600 BC to 1550 BC), or of radiocarbon dating results (1650 BC to 1600 BC). Jacobovici, however, accepts a date around 1500 BC. He goes on to explain how each of the Mosaic plagues, and even the parting of the , could be explained by , faulting and a limnic disaster, all caused by Santorini.

One possible scientific conjecture of the past has referred to a spot on the western end of a now-dried lake where it has been observed in the past to turn to a sandbar and facilitate foot travel when a low tide and a strong eastern wind coincide. Jacobovici refers to the possibility of the bed of the reed-filled lake rising out of the water due to geological movements, leaving the water on the sides and below the bed. The text of the story of Exodus 14:21-22, however, states that there were literal walls of water on either side, making this explanation incomplete.

* The ancient Jewish historian suggested in his work "" that the Hyksos were, in fact, the ancient Hebrews.

* Many of the theories explored by Jacobovici were previously published in the 1998 book "Act of God" written by British historian Graham Phillips.

The documentary claims that most historians consider the Exodus a "fairy tale", and claims that others reject scientific explanations that are not explicitly miraculous. Jacobovici reminds that God, according to the Judeo-Christian description, manipulates nature, having an intimate understanding of it. His miracles may therefore be efficient and exploit natural cycles and logic.

The documentary ends by posing the question of whether the Exodus was just a natural event or "the Hand of God", implying it is for the viewer to decide.

Jacobovici's assertions have been extensively criticized both by scientists, and by religious scholars. The criticism addresses virtually every one of Jacobovici's claims, as well as his methods in general. Critics point out, among the following:

* Jacobovici uses for his assertions. In absence of any other evidence, Jacobovici attempts to find a real world explanation for a Biblical phenomenon. Then, from the fact that a phenomenon "could" be caused by a certain event, Jacobovici surmises that a Biblical phenomenon "was" caused by exactly that type of an event. [ [http://www.heardworld.com/higgaion/?p=228 Higgaion » The Exodus Decoded: An extended review, part 12 ] ]
* Biblical scholars further criticize Jacobovici's method of first assuming that the Biblical description was an embellished description of a real world event, followed up with a claims that his explanation is "exactly as the Bible describes", whereas in reality his explanation diverges from the Bliblical description.

In his review of the documentary, Dr. Ronald Hendel, Professor of Hebrew Bible and Jewish Studies at the . [ [http://jewishstudies.berkeley.edu/faculty.html#hendel Jewish Studies Program at the University of California, Berkeley - Faculty ] ] writes:

"The made-for-TV documentary, "The Exodus Decoded", begins with some excellent special effects and a short excerpt from the - thriller, "". This introduction sets the stage for a fast-paced show with high production values and dramatic footage. Unfortunately, unlike the movie, this film presents itself as non-fiction. Watching it is reminiscent of an expensive infomercial, in which the actor-salesman makes increasingly exaggerated claims for his product—it makes you lose weight, adds muscle, and makes you rich to boot. In this case, the actor-director is selling a highly dubious bundle of theories about the historical and scientific veracity of the Biblical Exodus."

*
*
*
*
* (The modern one; for the actual historical mountain see )
* Thera (Santorini) eruption Association with the Exodus
*
* , showcased a similar special in 2006 concerning the inhabitants of Atlantis.
*
*