Operation Nimble Archer was the October 19, 1987, attack on two Iranian oil platforms in the Persian Gulf by United States Navy forces. The attack was a response to Iran's missile attack three days earlier on the MV Sea Isle City, a reflagged Kuwaiti oil tanker at anchor off Kuwait. The action occurred during Operation Earnest Will, the effort to protect Kuwaiti shipping amid the Iran-Iraq War.

Iran subsequently filed a lawsuit against the United States at the International Court of Justice.

On 16 October, Sea Isle City was in Kuwaiti waters, waiting to be loaded. It had been escorted there by U.S. warships, but was not under their protection at the time.[2] An Iranian Silkworm missile launched from the Iranian-occupied Al-Faw Peninsula hit the ship's wheel house and crew quarters, blinding its master, a U.S. citizen[3] and wounding 18 crew members. The damage to the ship would take four months to repair.[4]

In retaliation, U.S. officials decided to attack two platforms in the Rashadat oil field (named Rostam oil field before 1979). Having been damaged by Iraq a year earlier, the platforms were not producing oil, but had been used by the Iranian Revolutionary Guard Corps for military purposes. [5] 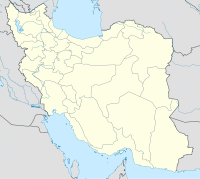 Approximate location of the platforms and the operation

U.S. officials said the platforms were being used by Iranian forces as command-and-control posts with radars to track shipping in the area and communications gear to relay messages between the mainland and Iranian forces operating near the platforms. U.S. Defense Secretary Caspar W. Weinberger said Iran used the facility to "launch small boat attacks against nonbelligerent shipping."[6][7][8][9]

On 2 November 1992 Iran filed suit with the International Court of Justice, the legal salvo that began a decade of claims and counter-claims by the United States and Iran. On 6 November 2003 the International Court of Justice ruled in favor of neither party, saying that "the actions of the United States of America against Iranian oil platforms on 19 October 1987 (Operation Nimble Archer) and 18 April 1988 (Operation Praying Mantis) cannot be justified as measures necessary to protect the essential security interests of the United States of America." The Court also ruled that it, "...cannot however uphold the submission of the Islamic Republic of Iran that those actions constitute a breach of the obligations of the United States of America under Article X, paragraph 1, of that Treaty,[which?] regarding freedom of commerce between the territories of the parties, and that, accordingly, the claim of the Islamic Republic of Iran for reparation also cannot be upheld;"[10]