Vin Diesel was born in New York City, the son of Delora, a psychiatrist and astrologer.[1][2] Diesel has Italian and black ancestry.[3][4] He has described himself as "definitely a person of color"[5] and stated that he is "of ambiguous ethnicity – Italian and a lot of other stuff".[6] Diesel has never met his biological father, and was raised by his African-American father, Irving, an acting instructor and theatre manager.[1][5] He made his stage debut at age seven when he appeared in the children's play Dinosaur Door, written by Barbara Garson. The play was produced at Theater for the New City in New York's Greenwich Village. His involvement in the play came about when he, his brother and some friends had broken into Theater for the New City's space on Jane Street with the intent to vandalize it. They were confronted by the theater's artistic director, Crystal Field, who instead of calling the police, handed them scripts and offered them parts in the upcoming show. He remained involved with the theatre throughout adolescence, going on to attend the city's Hunter College, where his creative writing studies led him to begin screenwriting. Diesel became an active film-maker in the early 1990s, first earning notice for the short film Multi-Facial, which was selected for screening at the 1995 Cannes Festival. Diesel has identified himself as a "multi-faceted" actor[7] as a result of early difficulties finding roles due to his mixed heritage.[7][8]

In an interview on Late Night with Conan O'Brien, he said that he changed his name to "Vin Diesel" while working as a bouncer at the New York City nightclub Tunnel, because in that business one's real name is not usually given out. The name "Vin" is simply a shortened version of "Vincent". He received the nickname "Diesel" from his friends who said he ran off diesel fuel, referring to his non-stop energy.

He has a twin brother, Paul, a younger brother, Tim, and a sister, Samantha.[citation needed] 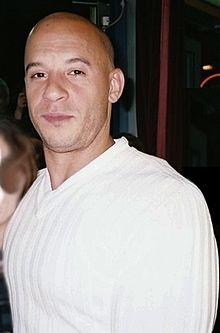 Diesel's first film role was a brief uncredited appearance in the 1990 film Awakenings. He then produced, directed, and starred in the 1994 short film Multi-Facial, a short semi-autobiographical film which follows a struggling actor stuck in the audition process, because he is regarded as either "too black" or "too white", or not black or white enough. He made his first feature-length film, 1997's Strays, an urban drama in which he was self-cast as a gang boss whose love for a woman inspires him to try to change his ways. Written, directed and produced by Diesel, the film was selected for competition at the 1997 Sundance Festival, leading to an MTV deal to turn it into a series.

He was then cast in Steven Spielberg's 1998 Oscar-winning film Saving Private Ryan on the poignancy of his performance in Multi-Facial. In 1999 he earned critical acclaim for his voice work as the title character in the animation film The Iron Giant. He followed it up with a major role in the business drama Boiler Room (2000) and then got his breakthrough role as the anti-hero Riddick in the science-fiction film Pitch Black (2000). He attained action hero super stardom with the box office hits, the street racing action film The Fast and the Furious (2001), starring opposite Paul Walker, and the action thriller xXx (2002).

In 2007, he was set to produce and star as Agent 47 in the film adaptation of the video game Hitman, but eventually pulled back and served as executive producer on the film instead. In 2008 he starred in the science-fiction action thriller Babylon A.D..

He returned to the The Fast and The Furious series, alongside all the actors from the original 2001 film, in Fast & Furious, which released in April 2009. In 2011, he once again returned, for the fifth film in the series, titled Fast Five.

Diesel is noted for his recognizable deep voice; he has said that his voice broke at around age 15, giving him a mature sounding voice on the telephone.[9]

Around 2001, Diesel dated his The Fast and the Furious co-star, Michelle Rodriguez.[10]

Diesel has expressed his love for the Dominican Republic, and how he relates to its multicultural facets.[11] He is also acquainted with President Leonel Fernandez, and has since appeared in one of his earlier campaign ads. "Los Bandoleros", a short film directed by Diesel, was also filmed in the Dominican Republic.[12]

Diesel claims that he prefers dating in Europe, where he is less likely to be recognized and where celebrities are not romantically linked to each other. He prefers to maintain his privacy regarding his personal life:[13]

Diesel has a daughter, Hania Riley, born April 2, 2008, with his girlfriend, model Paloma Jimenez.[15][16] Speaking to An tEolas, an Irish newspaper, Diesel stated he has been seen as a hard man, but is in touch with his soft side as a father.[17]