Herpes simplex virus 1 and 2 (HSV-1 and HSV-2), also known as Human herpes virus 1 and 2 (HHV-1 and -2), are two members of the herpes virus family, Herpesviridae, that infect humans.[1] Both HSV-1 (which produces most cold sores) and HSV-2 (which produces most genital herpes) are ubiquitous and contagious. They can be spread when an infected person is producing and shedding the virus.

Symptoms of herpes simplex virus infection include watery blisters in the skin or mucous membranes of the mouth, lips or genitals.[1] Lesions heal with a scab characteristic of herpetic disease. Sometimes, the viruses cause very mild or atypical symptoms during outbreaks. However, as neurotropic and neuroinvasive viruses, HSV-1 and -2 persist in the body by becoming latent and hiding from the immune system in the cell bodies of nerves. After the initial or primary infection, some infected people experience sporadic episodes of viral reactivation or outbreaks. In an outbreak, the virus in a nerve cell becomes active and is transported via the nerve's axon to the skin, where virus replication and shedding occur and cause new sores.[2]

HSV-1 and -2 are transmitted from contact with an infectious area of the skin during reactivations of the virus. Although less likely, the herpes viruses can be transmitted during latency. Transmission is likely to occur during symptomatic reactivation of the virus that causes visible and typical skin sores. Asymptomatic reactivation means that the virus causes atypical, subtle or hard to notice symptoms that are not identified as an active herpes infection. Atypical symptoms are often attributed to other causes such as a yeast infection.[3][4] HSV-1 is usually acquired orally during childhood, but may also be sexually transmitted. HSV-2 is primarily a sexually transmitted infection but rates of HSV-1 genital infections are increasing.[3]

Both viruses may also be transmitted vertically during childbirth, although the real risk is very low.[5] The risk of infection is minimal if the mother has no symptoms or exposed blisters during delivery. The risk is considerable when the mother gets the virus for the first time during late pregnancy.[6]

Symptoms resulting from primary infection with HSV are usually much more severe than subsequent outbreaks, as the body has not had a chance to produce antibodies. This first outbreak of oral herpes (cold sores) carries a low (≈1%) risk of developing aseptic meningitis.[1]

Animal herpes viruses all share some common properties. The structure of herpes viruses consists of a relatively large double-stranded, linear DNA genome encased within an icosahedral protein cage called the capsid, which is wrapped in a lipid bilayer called the envelope. The envelope is joined to the capsid by means of a tegument. This complete particle is known as the virion.[7] HSV-1 and HSV-2 each contain at least 74 genes (or open-reading frames, ORFs) within their genomes,[8] although speculation over gene crowding allows as many as 84 unique protein coding genes by 94 putative ORFs.[9] These genes encode a variety of proteins involved in forming the capsid, tegument and envelope of the virus, as well as controlling the replication and infectivity of the virus. These genes and their functions are summarized in the table below.

The genomes of HSV1 and HSV2 are complex and contain two unique regions called the long unique region (UL) and the short unique region (US). Of the 74 known ORFs, UL contains 56 viral genes, whereas US contains only 12.[8] Transcription of HSV genes is catalyzed by RNA polymerase II of the infected host.[8] Immediate early genes, which encode proteins that regulate the expression of early and late viral genes, are the first to be expressed following infection. Early gene expression follows, to allow the synthesis of enzymes involved in DNA replication and the production of certain envelope glycoproteins. Expression of late genes occurs last; this group of genes predominantly encode proteins that form the virion particle.[8] 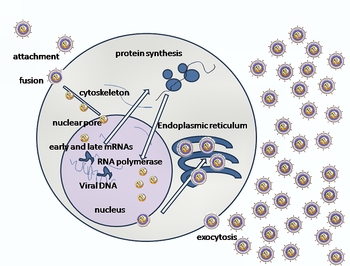 A simplified diagram of HSV replication

The sequential stages of HSV entry are analogous to those of other viruses. At first, complementary receptors on the virus and the cell surface bring the viral and cell membranes into proximity. In an intermediate state, the two membranes begin to merge, forming a hemifusion state. Finally, a stable entry pore is formed through which the viral envelope contents are introduced to the host cell.[10] In the case of a herpes virus, initial interactions occur when a viral envelope glycoprotein called glycoprotein C (gC) binds to a cell surface particle called heparan sulfate. A second glycoprotein, glycoprotein D (gD), binds specifically to at least one of three known entry receptors. These include herpesvirus entry mediator(HVEM), nectin-1 and 3-O sulfated heparan sulfate. The receptor provides a strong, fixed attachment to the host cell. These interactions bring the membrane surfaces into mutual proximity and allow for other glycoproteins embedded in the viral envelope to interact with other cell surface molecules. Once bound to the HVEM, gD changes its conformation and interacts with viral glycoproteins H (gH) and L (gL), which form a complex. The interaction of these membrane proteins results in the hemifusion state. Afterward, gB interaction with the gH/gL complex creates an entry pore for the viral capsid.[10] Glycoprotein B interacts with glycosaminoglycans on the surface of the host cell.

After the viral capsid enters the cellular cytoplasm, it is transported to the cell nucleus. Once attached to the nucleus at a nuclear entry pore, the capsid ejects its DNA contents via the capsid portal. The capsid portal is formed by twelve copies of portal protein, UL6, arranged as a ring; the proteins contain a leucine zipper sequence of amino acids which allow them to adhere to each other.[11] Each icosahedral capsid contains a single portal, located in one vertex.[12][13] The DNA exits the capsid in a single linear segment.[14]

HSV evades the immune system through interference with MHC class I presentation of antigen on the cell surface. It achieves this through blockade of the TAP transporter induced by the secretion of ICP-47[15] by HSV. TAP maintains the integrity of the MHC class I molecule before it is transported via the golgi apparatus for recognition by CD8+ CTLs on the cell surface. ICP-47 disrupts this integrity, preventing the capture of cytosolic proteins for CTL recognition and thus evades CTL destruction. 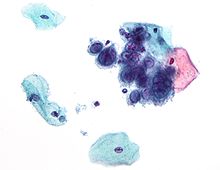 Following infection of a cell, herpes virus proteins, called immediate-early, early, and late, are produced. Research using flow cytometry on another member of the herpes virus family, Kaposi's sarcoma-associated herpesvirus, indicates the possibility of an additional lytic stage, delayed-late.[16] These stages of lytic infection, particularly late lytic, are distinct from the latency stage. In the case of HSV-1, no protein products are detected during latency, whereas they are detected during the lytic cycle.

The early proteins transcribed are used in the regulation of genetic replication of the virus. On entering the cell, an α-TIF protein joins the viral particle and aids in immediate-early transcription. The virion host shutoff protein (VHS or UL41) is very important to viral replication.[17] This enzyme shuts off protein synthesis in the host, degrades host mRNA, helps in viral replication, and regulates gene expression of viral proteins. The viral genome immediately travels to the nucleus but the VHS protein remains in the cytoplasm.[18][19]

The late proteins are used in to form the capsid and the receptors on the surface of the virus. Packaging of the viral particles — including the genome, core and the capsid - occurs in the nucleus of the cell. Here, concatemers of the viral genome are separated by cleavage and are placed into pre-formed capsids. HSV-1 undergoes a process of primary and secondary envelopment. The primary envelope is acquired by budding into the inner nuclear membrane of the cell. This then fuses with the outer nuclear membrane releasing a naked capsid into the cytoplasm. The virus acquires its final envelope by budding into cytoplasmic vesicles.[20]

HSVs may persist in a quiescent but persistent form known as latent infection, notably in neural ganglia.[1] HSV-1 tends to reside in the trigeminal ganglia, while HSV-2 tends to reside in the sacral ganglia, but note that these are tendencies only, not fixed behavior. During such latent infection of a cell, HSVs express Latency Associated Transcript (LAT) RNA. LAT is known to regulate the host cell genome and interferes with natural cell death mechanisms. By maintaining the host cells, LAT expression preserves a reservoir of the virus, which allows subsequent, usually symptomatic, periodic recurrences or "outbreaks" characteristic of non-latency. Whether or not recurrences are noticeable (symptomatic) or not, viral shedding occurs to produce further infections (usually in a new host, if any). A protein found in neurons may bind to herpes virus DNA and regulate latency. Herpes virus DNA contains a gene for a protein called ICP4, which is an important transactivator of genes associated with lytic infection in HSV-1.[21] Elements surrounding the gene for ICP4 bind a protein known as the human neuronal protein Neuronal Restrictive Silencing Factor (NRSF) or human Repressor Element Silencing Transcription Factor (REST). When bound to the viral DNA elements, histone deacetylation occurs atop the ICP4 gene sequence to prevent initiation of transcription from this gene, thereby preventing transcription of other viral genes involved in the lytic cycle.[21][22] Another HSV protein reverses the inhibition of ICP4 protein synthesis. ICP0 dissociates NRSF from the ICP4 gene and thus prevents silencing of the viral DNA.[23]

The virus can be reactivated by illnesses such as colds and influenza, eczema, emotional and physical stress, gastric upset, fatigue or injury, by menstruation and possibly exposure to bright sunlight.

Herpes viruses establish lifelong infections and the virus cannot currently be eradicated from the body. Treatment usually involves general-purpose antiviral drugs that interfere with viral replication, reducing the physical severity of outbreak-associated lesions and lowering the chance of transmission to others. Studies of vulnerable patient populations have indicated that daily use of antivirals such as acyclovir and valacyclovir can reduce reactivation rates.[4]

In vitro research has indicated that Aloe Vera may be effective against genital herpes.[27]

In the presence of a certain gene variation (APOE-epsilon4 allele carriers), a possible link between HSV-1 (i.e., the virus that causes cold sores or oral herpes) and Alzheimer’s disease was reported in 1979.[28] HSV-1 appears to be particularly damaging to the nervous system and increases one’s risk of developing Alzheimer’s disease. The virus interacts with the components and receptors of lipoproteins, which may lead to the development of Alzheimer's disease.[29] This research identifies HSVs as the pathogen most clearly linked to the establishment of Alzheimer’s.[30] Without the presence of the gene allele, HSV-1 does not appear to cause any neurological damage or increase the risk of Alzheimer’s.[31] Many more Alzheimer's disease susceptibility genes, including the major players APOE, clusterin, complement receptor 1 and PICALM are involved in the herpes simplex life cycle as curated in this database