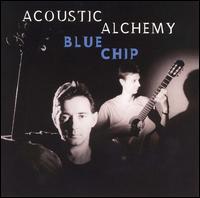 Blue Chip is the third album by , released under the MCA Master Series label in 1989, and again under in 1996.

The most successful track here is "Catalina Kiss", the album opener and a longstanding live favourite. Using a shuffle rhythm, the track calls upon the for embellishments, whilst tonal harmonies between the two guitars evoke a strong melody. JazzTrax presenter Art Good suggested that the track was inspired by an appearance by the band at the 1988 Catalina Island Jazz Festival.