Institutes of the Christian Religion

Institutes of the Christian Religion 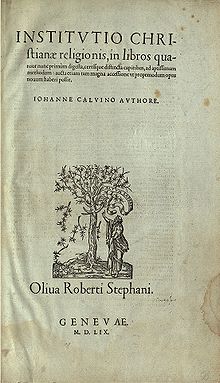 The Institutes of the Christian Religion (Institutio Christianae religionis) is John Calvin's seminal work on Protestant systematic theology. Highly influential in the Western world[1] and still widely read by theological students today, it was published in Latin in 1536 and in his native French in 1541, with the definitive editions appearing in 1559 (Latin) and in 1560 (French).

The book was written as an introductory textbook on the Protestant faith for those with some previous knowledge of theology and covered a broad range of theological topics from the doctrines of church and sacraments to justification by faith alone and Christian liberty. It vigorously attacked the teachings of those Calvin considered unorthodox, particularly Roman Catholicism to which Calvin says he had been "strongly devoted" before his conversion to Protestantism. The over-arching theme of the book – and Calvin's greatest theological legacy – is the idea of God's total sovereignty, particularly in salvation and election.[1]

The Institutes is a highly-regarded secondary reference for the system of doctrine adopted by the Reformed churches, usually called Calvinism.

Calvin's magnum opus, penned early in his life, "came like Minerva in full panoply out of the head of Jupiter," and even through its enlargements and revisions it remained basically the same in its content.[2] It overshadowed the earlier Protestant theologies such as Melanchthon's Loci Communes and Zwingli's Commentary on the True and False Religion. According to historian Philip Schaff, it is a classic of theology at the level of Origen's On First Principles, Augustine's The City of God, Thomas Aquinas's Summa Theologica, and Schleiermacher's The Christian Faith.[2]

The original Latin edition appeared in 1536 with a preface addressed to King Francis I of France, written on behalf of the French Protestants (Huguenots) who were being persecuted. Most often, references to the Institutes are to Calvin's final Latin edition of 1559, which was expanded and revised from earlier editions. Calvin wrote five major Latin editions in his lifetime (1536, 1539, 1543, 1550, and 1559). He translated the first French edition of the Institutes in 1541, corresponding to his 1539 Latin edition, and supervised the translation of three later French translations. The French translations of Calvin's Institutes helped to shape the French language for generations, not unlike the influence of the King James Version for the English language. The final edition of the Institutes is approximately five times the length of the first edition.

In English, five complete translations have been published - four from the Latin and one from the French. The first was made in Calvin's lifetime (1561) by Thomas Norton, the son-in-law of the English Reformer Thomas Cranmer. In the nineteenth century there were two translations, one by John Allen (1813) and one by Henry Beveridge (1845). The most recent from Latin is the 1960 edition, translated by Ford Lewis Battles and edited by John T. McNeill, currently considered the most authoritative edition by scholars. Calvin's first French edition (1541) has been translated by Elsie Anne McKee (2009). Due to the length of the Institutes, several abridged versions have been made. The most recent is by Tony Lane and Hilary Osborne; the text is their own alteration and abridgment of the Beveridge translation.

In English, this work is known as The Institutes of the Christian Religion or Calvin's Institutes. This title, however, may not be the best translation from the original Latin, Institutio Christianae Religionis. A literal, word for word translation of the title would read something like this: An Instruction in Christian Piety.

The Latin word institutio can mean arrangement, custom, introduction, or education. The English word institute can mean elementary principle or a brief, intensive course of instruction devoted to technical fields. Perhaps a better rendering for this part of the title would be introduction or catechism. This is supported by something Calvin himself says in his prefatory address to King Francis: "My intention was only to furnish a kind of rudiments, by which those who feel some interest in religion might be trained to true godliness."

The Latin word religio at the time did not have its modern definition as "religion". The idea of a distinct religious system or denomination at the turn of the 16th century was unknown, because there was only one acknowledged Christian church. The word religio (literally, "to bind") meant the bond that unites humans to God, as exemplified in the monastic vow. This is how Zwingli used the word in his 1525 De Vera et Falsa Religione Commentarius.

The phrase Christianae religionis was almost unknown prior to its popularization by Calvin in this work. He used it not to designate a particular religion, but to indicate the inner sense of piety that brings man to worship. These two words are possessive (in the genitive case in Latin) and are perhaps better translated as On Christian Piety.[3]

The opening chapter of the Institutes is perhaps the best known, in which Calvin presents the basic plan of the book. There are two general subjects to be examined: the creator and his creatures. Above all, the book concerns the knowledge of God the Creator, but "as it is in the creation of man that the divine perfections are best displayed", there is also an examination of what can be known about humankind. After all, it is mankind's knowledge of God and of what He requires of his creatures that is the primary issue of concern for a book of theology. In the first chapter, these two issues are considered together to show what God has to do with mankind (and other creatures) and, especially, how knowing God is connected with human knowledge.

To pursue an explanation of the relationship between God and man, Calvin adopts a traditional structure of Christian instruction used in Western Christianity, by arranging the material according to the plan of the Apostles' Creed. First, the knowledge of God is considered as knowledge of the Father, the creator, provider, and sustainer. Next, it is examined how the Son reveals the Father, since only God is able to reveal God. The third section of the Institutes describes the work of the Holy Spirit, who raised Christ from the dead, and who comes from the Father and the Son to affect a union in the Church through faith in Jesus Christ, with God, forever. And finally, the fourth section speaks of the Christian church, and how it is to live out the truths of God and Scriptures, particularly through the sacraments. This section also describes the functions and ministries of the church, how civil government relates to religious matters, and includes a lengthy discussion of the deficiencies of the papacy.