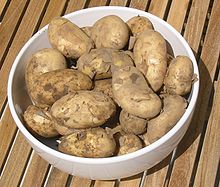 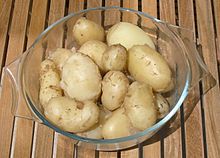 International Kidney is a cultivar of potato grown primarily as a new potato. In the UK, they are best known as Jersey Royal potatoes which are grown only in Jersey.[1] Jersey Royal is a Trade mark [2]

In around 1880 a Jersey farmer, Hugh de la Haye, showed friends a large potato that he had bought. It had 15 'eyes': points from which new plants sprout. They cut this potato into pieces, which they planted in a côtil (a steeply sloping field) above the Bellozanne valley. One plant produced kidney-shaped potatoes, with a paper-thin skin, which they called the Jersey Royal Fluke. This was later shortened to Jersey Royal.[3]

The farm where Hugh de la Haye grew the Jersey Royal was latterly known as Bushy Farm, on Mont Cochon. Grateful islanders presented Hugh with several gifts including the building of a two storey granite barn, which still bears his name on the lintel.

Under the Common Agricultural Policy of the European Union Jersey Royals are covered by a Protected Designation of Origin (PDO).[4]

Annually the Jersey Royal market has a value of £35m. It is Jersey's biggest crop export, accounting for 70% of agricultural turnover.[5] 99% of production is exported to the United Kingdom.