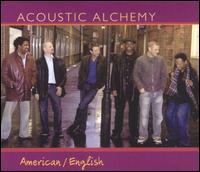 American/English is Acoustic Alchemy's fourth album release on the label, and contains eleven tracks, making it also their shortest album with the label to date.

The album was preceded by single "Say Yeah" for smooth jazz radio in the USA, an offering in a hip-hop style, remarked by some to be similar in style to British urban singer-songwriter . Experimental attributes include digital processing on Carmichael's guitar, which 'cut off' the ends of each note, and scat style vocals from Gilderdale toward the end of the track.

Other highlights include "The Detroit Shuffle", reminiscent of 1989's "Catalina Kiss" from the "Blue Chip" album. The track fused a vibrant melody with the shuffle rhythm which helped seal the band's popularity in the genre towards the end of the 1980s.

This is the first of Acoustic Alchemy's albums to include 's technique, designed to prevent illegal reproduction and audio ripping of the disc. It should be noted however, that such controls only exist on the commercial release of the album; the "promo only" copies do not contain any copy protection, but carry an Anti-Piracy warning.