He was often considered Russia's best playmaker in the late 1990s – early 2000s, along with Spartak Moscow's Egor Titov. This is because he is double footed and has a wide range of passing. He is also a renowned set-piece taker and possesses a fierce, stinging shot.

Loskov attended Torpedo Football School in Kurgan in 1983. He moved to Rostov-on-Don football school in 1990 and signed for Rostselmash in 1991. He became a notable midfielder, and Lokomotiv Moscow have shown interest in him, signing a preliminary contract in early 1996. However, Loskov decided to spend one more year with the Rostov club.

In 1997, Loskov transferred to Lokomotiv Moscow. He achieved significant success with the club, winning two Russian Cups, two Russian championships, and becoming the league top goalscorer twice. He played over 200 league matches for Lokomotiv, scoring 100 goals in the Russian Premier League and is the captain of the club since 2006. His high standard of performances has always attracted interest from leading European clubs like Monaco and Tottenham Hotspur. In Europe, Lokomotiv reached the Cup Winner's Cup semi-finals twice (1997–98 and 1998–99) and the Champions League second round (2003–04). Despite being one of the Russian Premier League's most consistent players and contributing with many assists, goals and inspirational performances for Lokomotiv Moscow, he has never showed his best for Russia only managing 25 appearances and 2 goals.

In 2007, Loskov left Lokomotiv for Saturn Ramenskoye, because of a conflict with manager Anatoly Byshovets.

On 27 July 2010, Dmitry Loskov signed again for Lokomotiv. Moreover, Loskov will once again play with the symbolic number 10. 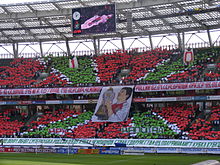