For other uses of the acronym SCI, see SCI 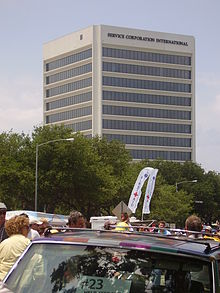 Robert L. Waltrip, a licensed funeral director who grew up in his family’s funeral business, founded the company in 1962.[4] SCI began as a small network of funeral homes and cemeteries in the Houston area.

As SCI grew its offshore presence, it continued to acquire businesses in North America—a marketplace that, by the late 1990s, had become extremely competitive among companies seeking to buy death care businesses. SCI, Alderwoods Group and Stewart Enterprises emerged from this period as the three largest companies in the industry. On December 31, 1999, SCI owned and operated 3,823 funeral service locations, 525 cemeteries, 198 crematoria and two insurance operations located in 20 countries on five continents.[5]

In 1999, SCI also introduced Dignity Memorial,[6] the first transcontinental brand of death care services and products in North America. By unifying its network of funeral homes and cemeteries under one brand name, SCI believed it could establish recognizable and communicable brand values.

In 2000, poor market conditions forced SCI to reevaluate operations. While foreign operations had once shown promise, nearly 70 percent of SCI’s revenue was generated by operations in the United States and Canada. The company decided to divest many of its offshore businesses, in addition to many North American funeral homes and cemeteries.[7]

Between 2002 and 2006, SCI reduced its net debt (total debt minus cash) by more than $1.0 billion, increased operating cash flow, and simplified its field management organization to enhance efficiency, performance, and accountability. It also changed business and sales processes, tightened internal controls, strengthened corporate governance standards, and established the a new training and development system. For its shareholders, SCI returned value through more than $335 million in share repurchases, and it resumed payment of a regular quarterly dividend in early 2005, the first since 1999.[8]

In 2006, SCI merged with Alderwoods Group, its nearest competitor in terms of size. The Federal Trade Commission (FTC) blocked the merger, citing concerns over consumer choice. After agreeing to divest funeral home and cemetery locations in several markets and end licensing agreements with other funeral homes, the FTC allowed the merger to continue. By 2007, the integration of Alderwoods's locations and operations was complete.

In 2009 SCI put in a bid to purchase Keystone North America for $208 million. This purchase was completed in 2010 and integrated approximately 200 additional locations into the SCI portfolio.

SCI operates the following brands in the United States and Canada.[9]

Making everlasting Memories (MeM) is an online database service that allows customers to preserve biographies, photographs and other memories of loved ones.

Founded in 1972, National Cremation Society is the oldest and largest cremation service in the United States.

SCI's network of funeral homes consists almost entirely of existing businesses that the company acquired. SCI tends to buy successful funeral homes that are firmly settled and already well known in their community. The company retains the home's original name, often along with former owners who are kept on as management. Those owners not retained as management often accuse SCI of unethical, if not illegal, business practices. A typical funeral home that is owned by SCI will not contain advertisements or logos for the corporation, with the exception, perhaps, of pins on staff lapels. As a consequence, most North American consumers are unfamiliar with the company itself. Instead, SCI places strong emphasis on their Dignity Memorial TM brand. The "Dignity" logo can be seen throughout SCI's funeral homes and cemeteries, on staff, signage, paperwork, vehicles, etc.

In the late 1990s, SCI was involved in a controversy involving alleged violations of Texas State embalming laws. The proceedings took a political slant due to Robert Waltrip’s friendship with the family of then-governor George W. Bush and Waltrip's campaign contributions to various members of the Bush family.[12]

Referred to as "Funeralgate" or "Formaldegate" in the media, the controversy was widely publicized when Eliza May—a director with the Texas Funeral Service Commission (TFSC)—was fired while investigating SCI. May alleged in a civil suit that she was fired because she refused to halt her investigation despite pressure to do so from Governor Bush. Other TFSC employees indicated she was fired because her colleagues had lost confidence in her ability and because she was using her authority inappropriately.

May's lawyers subpoenaed President Bush to testify at the trial,[13] but Texas Judge John K. Dietz threw out the subpoena on the grounds that the then-governor was not in a position to have enough specialized information to require his involvement.[14]

Improper handling of corpses in Virginia and Maryland

On April 5, 2009, the Washington Post reported that the National Funeral Home, a facility owned by SCI in the Falls Church area of Fairfax County, Virginia which also acts as a central care center for embalming and body preparation for other nearby SCI-owned operations (Arlington Funeral Home, Danzansky-Goldberg Memorial Chapel and Demaine Funeral Home)), was storing naked bodies in various stages of decomposition in conditions described as "disgusting, degrading and humiliating". The story went on to report that as many as 200 bodies were stored on "makeshift gurneys in the garage" and "at least half a dozen veterans destined for the hallowed ground at Arlington National Cemetery were left in their coffins on a garage rack". The Post reports that documentation describing these conditions has been reported to the Virginia Board of Funeral Directors and Embalmers.[16]

A few days later, the Post reported that family members of a deceased Army veteran whose remains were stored in an unrefrigerated garage at National Funeral Home have asked the Fairfax County Commonwealth's Attorney to investigate the actions of National and its parent company, SCI, as crimes.[17]

The Post further reported that the family of retired U.S. Army Colonel Andrew DeGraff filed a lawsuit in Fairfax County alleging that SCI mishandled and failed to treat the late Colonel DeGraff's remains with dignity and respect. According to the article, an SCI spokesman said that the company is conducting an internal investigation.[18]

On April 26, 2007 the Post reported that an SCI cemetery in Alexandria, Virginia had improperly buried the remains of the stillborn daughter of Nsombi Hale in a grave too shallow (in a grave about 8 inches deep). Nsombi Hale is filing suit against SCI.[19]

After an internal investigation by SCI, attorneys working for SCI denied the charges against the company in a letter to Virginia funeral regulators,[20] and a few days later, the Post reported that Robert Ranghelli, one of the SCI employees who had corroborated the initial reports of improper handing of corpses, was fired for "speaking with the media" after having been on administrative leave for several months following the initial reports in the newspaper.[21]

State Finds No Evidence of Grave Desecration at California Cemetery

On September 14, 2009, KNX, a CBS all-news radio station in Los Angeles, reported that Eden Memorial Park, a Jewish cemetery managed by SCI on Sepulveda Boulevard in Mission Hills, has been accused of destroying graves to make room for new interments. The KNX story stated: A class-action lawsuit alleges that Eden Memorial Park and its management Service Corporation International (SCI), instructed groundskeepers to secretly break concrete blocks with a backhoe and then remove, dump and/or discard the remains to make room for new interments.[22]

The LA Times reported that state officials found no evidence of mass grave disturbances. Russ Heimerich, a spokesman for the state Department of Consumer Affairs was quoted as saying "We have not seen any evidence of the kind of massive desecration that [is] being alleged...The kind of activity they're alleging [is] not easily hidden, especially on a willful, large-scale basis." The plaintiff's attorney rejected the findings of the state's investigation. The lawsuit remained ongoing as of late 2009.

“We have not seen any evidence of the kind of massive desecration that are being alleged,” said Russ Heimerich, a spokesman for the state Department of Consumer Affairs, which oversees cemeteries. “The kind of activity they’re alleging are not easily hidden, especially on a willful, large-scale basis.”

“Investigators from the state were told by various groundskeepers over a year ago that they had been repeatedly told to throw bones away, and yet for some reason, the state didn’t adequately follow up,” he said. “The evidence we have been able to uncover shows that the state was asleep at the switch.”

The cemetery’s parent company, Service Corporation International, denies all charges. According to Heimerich after the lawsuit was filed, the Consumer Affairs Department reviewed five to six years of the cemetery's annual inspection records and found no indication that graves had been disturbed.

According to the Los Angeles Times article, "The agency also asked the dozens of families that contacted officials to look for signs of disturbances -- shifted or cracked gravestones or anything else that appeared different from previous visits -- and didn’t receive a single call back, he said".[23]